Gloria Allred Will Agree to Handwriting Analysis Only After Senate “Hearings” 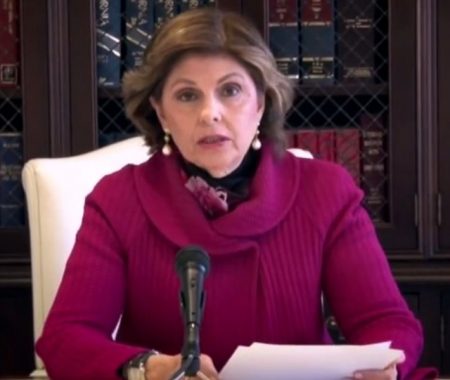 (Nov. 16, 2017) — In an interview with CNN’s Don Lemon on Wednesday evening, Atty. Gloria Allred, who represents Roy Moore accuser Beverly Young Nelson, said she will release Young Nelson’s yearbook for handwriting analysis only if the U.S. Senate holds hearings she has demanded regarding her client’s and others’ allegations of sexual crimes allegedly occurring four decades ago.

On Monday, with Allred at her side, Young Nelson tearfully read from a script which purportedly recounted her 1977 sexual assault in Moore’s vehicle when she reportedly worked as a waitress at the Old Hickory House in Gadsden, AL.

Allred, too, read from a script during her remarks.

Young Nelson stated that her relationship with Moore began the year before, when she was 15, with unwanted attention amidst his patronage at the restaurant “almost every night.”

Toward the end of Monday’s press conference, Allred held up a yearbook provided by Young Nelson purporting to bear Moore’s signature with a romantic message and the initials “D.A.” to the right.  The “evidence” was enough to convince former judge and prosecutor Jeanine Pirro that Moore was guilty as charged. “It’s all there,” she vehemently exclaimed on Sean Hannity’s Tuesday night show.

The inscription also bore the purported date of Moore’s signature, with “Olde Hickory House” printed underneath.

An online search indicates that the restaurant does not use the “e” in the word “Old.”

Young Nelson claimed that “a couple of weeks later,” Moore offered her a ride home and she accepted because her boyfriend, who she had expected to fulfill that role, was late.  It was at that time that she claimed Moore attempted to sexually assault her.

“Mr. Moore was wearing brown Hush Puppies on his feet,” Young Nelson said she remembered of that night.

Further, Moore’s attorney, Philip Jauregi, gave a press conference on Wednesday afternoon in which he questioned the validity of Moore’s signature in the yearbook given that Moore reportedly said he did not remember signing it and that he never used the initials “D.A.” after his name since his title at the time was not “District Attorney,” as Young Nelson claimed.

During her tearful recitation of the alleged events, Young Nelson claimed that Moore told her that if she told anyone, she would not be deemed credible because he was the “District Attorney.”  She claimed that she covered the bruises she incurred with makeup in the days following and did not immediately tell anyone about it.

In 1977, Moore was Etowah County assistant district attorney.  Jauregi added that Moore’s assistant at the time, whose initials are “D.A.,” would often place them after Moore’s signature on court documents, one of which was Young Nelson’s divorce decree in 1999. 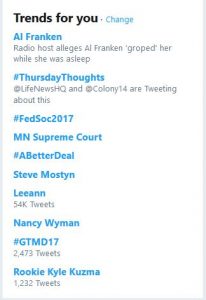 Jauregi’s presser was not widely publicized in the mainstream media and, unlike the accusations which began last Thursday, is not trending on Twitter as of this writing.

Once the allegations against Moore arose beginning last Thursday in a Washington Post article, members of the U.S. Senate condemned Moore, said he was unfit to be elected to that body, and withdrew financial support for the remainder of his campaign, which ends on December 12 when Alabama voters decide who their next junior U.S. Senator will be.

Although the election has not yet taken place, Allred is demanding that two senatorial committees hold hearings on the women’s allegations “within two weeks,” a request she also made during Monday’s presser.

During the 2016 presidential campaign, already acted as an advisor to the DNC and also served as a delegate to the Democrat National Convention in July of that year.  She currently represents Donald Trump accuser Summer Zervos.

After Monday’s press conference, Moore’s wife Kayla posted on Facebook that “We knew something was coming, just did not know what next. This is the same Gloria Allred that did the very exact same thing to Trump during his campaign. Going on two months now they’ve been on a witchhunt here in Etowah County and our state advertising people to step forward with accusations and we are gathering evidence of money being paid to people who would come forward. Which is part of why we are filing suit!”

Allred responded that Kayla’s response was “a personal attack.”

A question posed by this writer to a journalist for AL.com who reported a new allegation against Moore made by a former client has not received a response nearly four hours later.

As the story went to press, a morning anchor of a Los Angeles radio station, Leeann Tweeden, alleged that she was groped in 2006 by then-comedian and current U.S. Senator Al Franken (D), offering photographic evidence along with her narrative.

Franken was first elected to the Senate in 2008 by a margin just over 300 votes.

At the same time, Allred’s website, which was functional two days ago, is now yielding an error message.

Gloria Allred Will Agree to Handwriting Analysis Only After Senate “Hearings” added on Thursday, November 16, 2017