Bongino: “The Information I Have is Real” 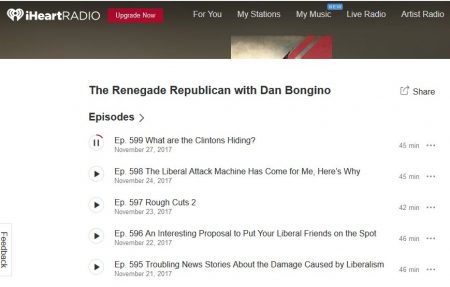 (Nov. 27, 2017) — At the opening of his “Renegade Republican” radio show on Monday, host Dan Bongino said that “the Clinton cartel is coming after me” because the information he has claimed to “know” is accurate.

As reported here earlier, Bongino, a former Secret Service agent who provided protective detail to Hillary Clinton when she was a U.S. senator, was quite visible over Thanksgiving weekend on social media and the Fox News Channel to refute the claim of Clinton’s former press secretary, Nick Merrill, that he never worked with the Clintons.

Bongino went on to acknowledge emails he has received from listeners asking that he reveal all of the information he said has been given to him about the Clintons by sources, who he has said are “unimpeachable.”  Bongino responded by stating that he cannot divulge information provided to him confidentially until his sources give their permission for him to do so.

Regarding the information he claims to have, Bongino said that most of it “is already out there” but is as yet not “confirmed.”

He described the details as “pretty horrifying.”

Bongino’s Friday show is titled, “The Liberal Attack Machine Has Come For Me, Here’s Why.”

He said he turned down “about 20” interview requests extended to him on Monday.

“If what I know about the Clintons and Epstein and EmailGate and BlackberryGate…is all nonsense…I’m some loose cannon, I’m some conspiracy-theory wacko, then why is the Clinton cartel coming after me?” Bongino asked rhetorically.

“EmailGate” refers to Hillary Clinton’s use of a private email server set up in the basement of her Chappaqua, NY home while she served as Obama’s secretary of state.  “BlackberryGate” likely refers to Bongino’s tweet of Thursday in which he asked Merrill, “Are you sure you destroyed ALL of the Blackberries.  Was there govt property in the bunch?”

“I’m not playing a victim; I’m telling you I was born for this,” Bongino then told his audience.

“If the information’s garbage, then why bother?” he continued, then answered his own question with, “Because the information I have is real, and they know it’s real.  You know why?  Because they were there.”

“Folks, the stuff is very real, and it’s super-damaging information, and I’m only hoping and praying that the people who’ve given it to me…give me permission at some point to go forward with it,” he ended the segment.

7 Responses to "Bongino: “The Information I Have is Real”"