“WHO WAS ON THOSE PLANES WITH MR. CLINTON?”

Bongino was active on Twitter over Thanksgiving weekend in a number of tweets about the Clintons, suggesting that they harbor “ugly” information from the American people.

Appearing on “Tucker Carlson Tonight” last Wednesday, he called Hillary Clinton “a fraud” and “the most deceptive human being manipulative political person in a position of power I’d ever met in my entire life.”

Bongino began working for the Secret Service in 1999 and left in 2011, documenting his reasons for doing so in his book, “Life Inside the Bubble: Why a Top-Ranked Secret Service Agent Walked Away From It All.”

In response to a claim made after Bongino’s Wednesday appearance by Hillary Clinton’s 2016 traveling press secretary, Nick Merrill, that he did not recognize Bongino as having provided Secret Service protection to the former chief executive or First Lady, Bongino tweeted a photo from Newsday depicting him protecting Hillary Clinton at a tennis tournament in 2001 while she was a U.S. Senator from New York.

The photo was aired on Saturday morning’s edition of “Fox & Friends” along with an on-air appearance by Bongino in which he said that various impeccable sources have related damaging and apparently shocking information about the Clintons which they themselves have not made public for fear of retribution.

In his tweet on Monday morning, Bongino wrote, “Has the Clinton team come clean with ALL of the passenger names, and their ages, on those Epstein flights? Who was on those planes with Mr. Clinton?”

The tweet referenced Bill Clinton’s now well-known flights on board a private plane owned by billionaire investor Jeffrey Epstein, who in 2007 was prosecuted by the Palm Beach, FL police on a number of sexual-abuse charges said to involve underage girls. Convicted and sentenced in 2008 on a single count of solicitation of a minor, Epstein spent just over a year in jail followed by a year of house arrest.

Instead of going to state prison, Epstein was permitted to stay in the Palm Beach County jail and to “leave the jail six days a week during the day to work at his West Palm Beach office for several hours on a work-release program,” according to the Sun-Sentinel.

As The Post & Email reported on Saturday, a New York Magazine article appearing to have been penned prior to Epstein’s arrest and conviction describes Epstein as friendly with both Bill Clinton and the now-disgraced actor, Kevin Spacey, said to also have been Clinton’s “close friend.”

New York Magazine’s Landron Thomas Jr. described Epstein as an entrepreneur who “scours the world for investment opportunities. He owns what is said to be Manhattan’s largest private house yet runs his business from a 100-acre private island in St. Thomas.”

In the spring of last year, various major media outlets reported, with accompanying flight manifests, that Bill Clinton’s trips on Epstein’s “Lolita Express” usually included the presence of Secret Service agents but that on at least five, Clinton declined the protection he is provided as a former U.S. president.

Epstein was said to have traveled with a number of underage girls on his aircraft and as part of his sentence was compelled to pay financial settlements to those claiming they were abused at his sprawling Palm Beach home.

Epstein was also prosecuted federally, although his attorneys arranged for him to accept a significantly-reduced plea deal which excluded consideration of many of his alleged victims, two of whom filed a federal lawsuit.

In 2006, according to The New York Post, Jeffrey Epstein donated $25,000 to the Clinton Foundation and offered his jet to Bill Clinton for a trip to Africa to raise AIDS awareness.

Epstein was also reported to have been “friends” with Donald Trump, visiting Trump’s Mar-a-Lago resort and hosting Trump at his home on numerous occasions.

Clinton himself has been accused of sexual misconduct with women ranging from harassment to rape. The accusations of Paula Jones, which entailed the testimony of former White House intern Monica Lewinsky, led to his 1998 impeachment by the House of Representatives, after which the U.S. Senate acquitted him on both charges, thereby declining to remove him from office.

In one of his tweets over the weekend, Bongino wrote, “They know what they’re hiding.”

As this story was going to press, Bongino tweeted, “What are the Clintons hiding? Don’t miss my podcast today on iTunes: http://bit.ly/bpodcast  Also on iHeart radio: https://www.iheart.com/podcast/the-renegade-republican-with-dan-bongino-27994425/?cmp=ios_share …” 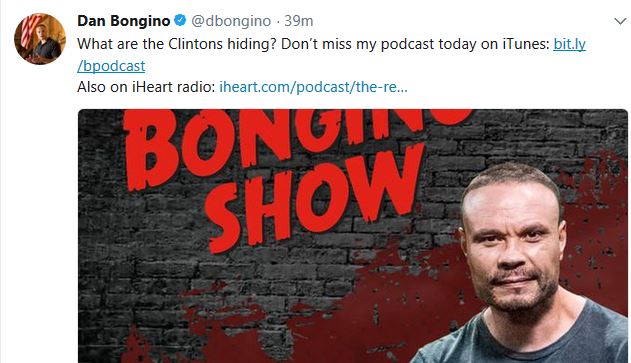