“THEY KNOW WHAT THEY’RE HIDING” 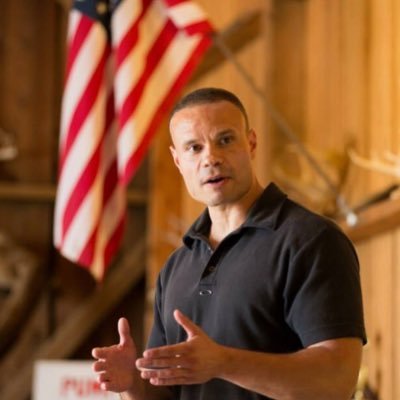 (Nov. 25, 2017) — Over the last four days, former NYPD officer and Secret Service agent Dan Bongino has commented extensively on Twitter, his radio show, and television that Bill and Hillary Clinton are “hiding” something ominous from the American public.

While employed with the Secret Service, Bongino provided security for Hillary Clinton while she was a U.S. senator, and later, as a member of the “elite Presidential Protective Division,” to George W. Bush and Barack Obama.

Bongino has run unsuccessfully for public office on three occasions:  twice in Maryland and once in a congressional primary last year in his newly-adopted home state of Florida.

On Wednesday, Bongino was a guest on “Tucker Carlson Tonight,” where he claimed to substitute-host Brian Kilmeade that Hillary Clinton is “the most deceptive human being manipulative political person in a position of power I’d ever met in my entire life.”

Fox News has included Bongino’s statements in its own Twitter feed following his recent appearances, which Bongino in turn has retweeted.

“Mrs. Clinton is a fraud,” Bongino said in response to comments made by the opposing guest in the segment.  “If people knew the Mrs. Clinton I knew, they would have a far different take.”  He criticized her book tour, characterizing it as an opportunity for her to try to “upend” the results of last year’s presidential election in which she lost to businessman Donald Trump.

On Saturday morning, Bongino was a guest on “Fox & Friends,” where he said that credible “associates” have recounted to him “damaging” information about the Clintons but are afraid to make it public.

“I can’t give them up,” Bongino said of suggestions that he should reveal the information the associates reportedly provided.  “I can’t just put that out there without getting them hurt.”  He also expressed concern for their family members. 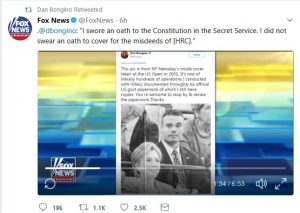 During Saturday’s broadcast, a photo of Bongino providing security to Hillary Clinton at a 2001 tennis tournament was shown to the viewers to refute the claim of former Hillary Clinton presidential campaign press secretary Nick Merrill that he did not recognize Bongino as having ever worked with the Clintons.  “I was there way before Nick arrived,” Bongino said.

Merrill was often copied in on emails from then-Hillary Clinton campaign manager John Podesta which were released by WikiLeaks beginning on October 7, 2016.

On Friday, Zerohedge.com published an article on the same subject with further detail about Epstein’s private island resort in the U.S. Virgin Islands where young girls were allegedly abused.

In a New York Magazine article which appears to have been published prior to Epstein’s 2007 conviction and incarceration which followed, Epstein was said to be “pals” with Donald Trump and a host of other high-profile individuals, including Atty. Alan Dershowitz and Bill Clinton, to whom he offered the use of his private airliner to travel to Africa purportedly to raise awareness of AIDS.

Page 3 of the article states:

What attracted Clinton to Epstein was quite simple: He had a plane (he has a couple, in fact — the Boeing 727, in which he took Clinton to Africa, and, for shorter jaunts, a black Gulfstream, a Cessna 421, and a helicopter to ferry him from his island to St. Thomas). Clinton had organized a weeklong tour of South Africa, Nigeria, Ghana, Rwanda, and Mozambique to do what Clinton does. So when the president’s advance man Doug Band pitched the idea to Epstein, he said sure. As an added bonus, Kevin Spacey, a close friend of Clinton’s, and actor Chris Tucker came along for the ride.

Spacey is currently under investigation by authorities at Scotland Yard for two alleged assaults amidst a number of other allegations of sexual abuse. Spacey is now in a rehabilitation facility in Arizona.  His show, “House of Cards,” is set to stop airing in January.

The undated NYM article concludes with:

Friends of Epstein say he is horrified at the recent swell of media attention around him (Vanity Fair is preparing a megaprofile, and the Villard House office has had a barrage of calls from other media outlets). He has never granted a formal interview, and did not offer one to this magazine, nor has his picture appeared in any publication. Yet for one so obsessive about his privacy, one wonders — didn’t he realize that flying Clinton and Spacey around Africa was going to blow his cover? As he said to a friend: “If my ultimate goal was to stay private, traveling with Clinton was a bad move on the chessboard. I recognize that now. But you know what? Even Kasparov makes them. You move on.

In May of last year, Fox News reported that Clinton flew on Epstein’s jet a total of 26 times as opposed to the 11 previously on record.  While Clinton was accompanied by a Secret Service detail on most of the trips, records Fox obtained show that on “at least five of the flights,” Clinton chose to leave the detail stateside.

On Sept. 24, 2007, in a deal shrouded in secrecy that left alleged victims shocked at its leniency, Epstein agreed to a 30-month sentence, including 18 months of jail time and 12 months of house arrest and the agreement to pay dozens of young girls under a federal statute providing for compensation to victims of child sexual abuse.

In his tweets to Merrill over the last few days, Bongino appeared to reference Epstein only once by hashtag.  He also included the hashtag #EmailGate, referencing Hillary Clinton’s use of a private, insecure email server while she served as Barack Obama’s secretary of state.

Bongino’s use of the hashtag #PeopleKnow revealed two tweets from him to Merrill on November 23 relating to Hillary Clinton:

Early Saturday afternoon, Bongino tweeted, “Why the coordinated rush by the Clinton mob to attack me if I’m just some loose cannon. Why worry about it? Why not just move along. It’s because they know what they’re hiding.”

On Saturday evening, Bongino tweeted that he will be a guest of Jeanine Pirro at 9:00 p.m. EST “in another spicy debate.”