AND DOES THE MEDIA CARE? 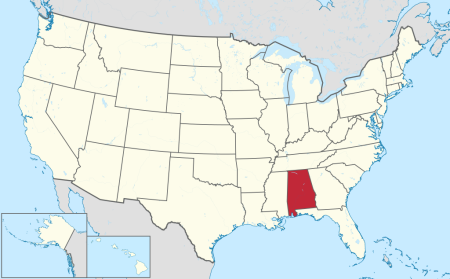 (Nov. 26, 2017) — On Friday, One America News (OAN) sent reporter Pearson Sharp to speak with native Alabamians about their perception of Republican U.S. Senate candidate and former judge Roy Moore in the wake of four women’s allegations of sexual impropriety and abuse published by The Washington Post beginning on November 9.

While polls appeared to show a decline in Moore’s support directly after the allegations were made public, The Huffington Post reported on Friday that a conglomerate of polls may indicate that Moore is leading Democrat Doug Jones.

The most egregious of the initial four allegations came from Leigh Corfman, who said that she was 14 when Moore befriended her at the local courthouse, called her on the phone in her bedroom, and picked her up on two occasions, one of which allegedly involved an unwanted sexual encounter and the other with Moore allegedly serving her alcohol.

Corfman’s mother later said that her daughter did not have a phone in her bedroom at the time.  In court documents obtained by Breitbart News, it is stated that Corfman’s custody was ordered to transfer to her father, who lived in another town, shortly after her alleged initial conversation with Moore outside of the courtroom.

In what became The Post’s first article on the subject, the three co-authors wrote:

Neither Corfman nor any of the other women sought out The Post. While reporting a story in Alabama about supporters of Moore’s Senate campaign, a Post reporter heard that Moore allegedly had sought relationships with teenage girls. Over the ensuing three weeks, two Post reporters contacted and interviewed the four women. All were initially reluctant to speak publicly but chose to do so after multiple interviews, saying they thought it was important for people to know about their interactions with Moore. The women say they don’t know one another.

The article did not disclose how the co-authors determined that there were “four women” who could elucidate them about the alleged “relationships” or if more remain at large.  In a telephone interview with Breitbart, Corfman’s mother, Nancy Wells, reportedly affirmed that The Post sought out her daughter to “convince her to do it,” meaning to make her accusations public.

An article at AL.com reported that another accuser claimed that in 1991, while working in private law practice, Moore groped her as she was exiting his office.  The woman, Tina Johnson, was said to have “pled guilty to writing bad checks, and for third-degree theft of property” at some point in her past.

The article cannot be accessed, at least by this writer, as of 12:33 p.m. EST in a general internet search but can be reached through TIME. The AL.com website is functional. 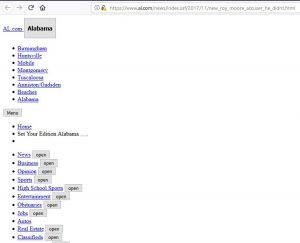 In the article, Johnson was quoted as having said that she came forward now “because somebody asked.”

After reading it, The Post & Email contacted the article’s author, Anna Marie Vollers, to ask if AL.com initially contacted Johnson or if Johnson herself took action.  Vollers responded to our second request but asked that we not publish her response.  After then inquiring as to whether or not, to her knowledge, allegations such as Johnson’s were made earlier in Moore’s 40-year public career, she did not respond.

Johnson appeared on the “Megyn Kelly Today” show to say, according to an AL.com transcript, that Moore “scarred me for life.”  The Post & Email was unable to play the video of the show segment.

On Sunday a special headline at the top of AL.com’s home page, “Roy Moore and the U.S. Senate race,” leads to a column with the heading, “Roy Moore.”

An article appearing underneath which is actually an opinion piece claims that Moore’s accusers “would not have come forth without prompting from members of the media” because of their Southern upbringing, a claim with which Johnson appears to have agreed while speaking with Kelly.

The article compares abused women who might speak out as facing the prospect of suffering the same fate as the protagonist in the fictional work “Gone With the Wind,” Scarlett O’Hara. 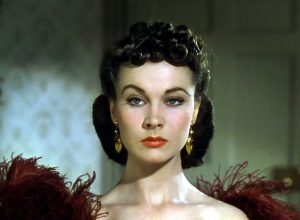 Another article in the section presents a written interview with Jones on his positions, particularly in light of Trump’s Sunday Twitter comments claiming that he is “WEAK on Crime, WEAK on the Border, Bad for our Military and our great Vets, Bad for our 2nd Amendment, AND WANTS TO RAISES TAXES TO THE SKY.”

Moore has vigorously denied all of the allegations and suggested that “legal action” is being prepared as facts about the accusers are gathered.  Last Tuesday, he told television host Scott Beason that the women’s claims “came as a complete shock.”

Although undated, the Moore campaign publishes press releases virtually every business day, many now in response to The Post and others’ allegations.  In a release likely published on November 13, the day on which Beverly Young Nelson and Atty. Gloria Allred held a press conference in New York alleging that Moore had sexually assaulted Young when she was 16, the campaign indicated that it had knowledge of the impending presser, stating:

We’ve said this before and we’ll say it again: Judge Moore is an innocent man and has never had any sexual misconduct with anyone. This is a witch hunt against a man who has had an impeccable career for over 30 years and has always been known as a man of high character.

Let it be understood: the truth will come forward, we will pursue all legal options against these false claims and Judge Moore will be vindicated.

Following her press conference with Young Nelson, Allred demanded that the Senate “hold hearings” on the allegations against Moore but has remained silent on those made against Democrat U.S. Senator Al Franken, accompanied by photographic proof, by radio host Leeann Tweeden.

Senate Majority Leader Mitch McConnell almost immediately demanded that Moore withdraw from the race “if the allegations are true” but agreed to launch an ethics investigation into Franken’s behavior without issuing the same condition.

In a campaign newsletter last week, Moore claimed that McConnell and Allred are “plotting behind the scenes” to end his Senate bid.

An article published at LegalInsurrection.com and widely circulated on the internet is titled, “If Roy Moore Wins, Thank Gloria Allred and Al Franken.”

While The Post & Email takes issue with what it sees as OAN’s editorializing on behalf of Moore in its printed article, its interview of local residents may shed light on how the candidate is perceived by those who will be casting their votes in the special election on December 12 and appears to be the only one of its kind to date.

What Do Alabama Voters Think? added on Sunday, November 26, 2017

2 Responses to "What Do Alabama Voters Think?"