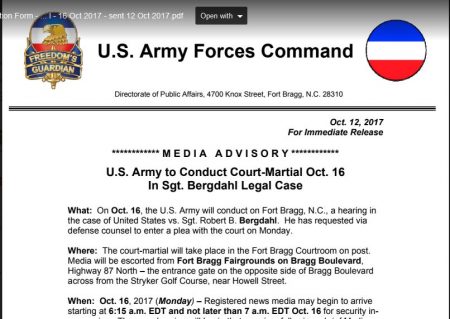 What:  On Oct. 16, the U.S. Army will conduct on Fort Bragg, N.C., a hearing in the case of United States vs. Sgt. Robert B. Bergdahl.  He has requested via defense counsel to enter a plea with the court on Monday.

Where:  The court-martial will take place in the Fort Bragg Courtroom on post.  Media will be escorted from Fort Bragg Fairgrounds on Bragg Boulevard, Highway 87 North – the entrance gate on the opposite side of Bragg Boulevard across from the Stryker Golf Course, near Howell Street.

When:  Oct. 16, 2017 (Monday) – Registered news media may begin to arrive starting at 6:15 a.m. EDT and not later than 7 a.m. EDT Oct. 16 for security in-processing.  The open hearing will begin that morning, following a brief Media Operations Center update.

Notes and Registration Deadline: Media organizations and journalists should register by noon Oct. 13, Friday, by completing the attached questionnaire and returning it to E-mails for:  john.p.boyce2.civ@mail.mil and james.e.hinnant.civ@mail.mil

Media satellite trucks will be escorted after a security orientation at the Fort Bragg Fairgrounds parking area.

News media or the public with questions regarding attending, may contact Forces Command Public Affairs at (910) 570-7200 or E-mail john.p.boyce2.civ@mail.mil or james.e.hinnant.civ@mail.mil.