WHO BEGAN THE DISCUSSION? 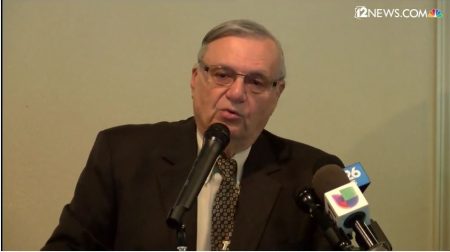 (Oct. 1, 2017) — An exchange between a reported Valley Public Radio “journalist” and former Maricopa County Sheriff Joseph Arpaio on Friday did not begin with Arpaio’s broaching of the Obama birth certificate investigation, as a North Carolina media outlet reported.

Whether or not the 4+-minute question-and-answer between the reporter and Arpaio was “heated” or simply Arpaio attempting to quantify the findings of the investigation that the long-form birth certificate image posted at whitehouse.gov in April 2011 is for the listener to decide.  However, as evidenced by the video accompanying the article, Arpaio was responding to questions on the issue and did not raise it.

The video of that portion of the press conference the 85-year-old former six-term sheriff gave on Friday afternoon in Fresno, CA is also available on YouTube (h/t CDR Charles F. Kerchner, Jr.).

On March 1, 2012, during the first of what would be three press conferences over more than five years organized by Arpaio, his lead investigator on the probe, Mike Zullo, stated that probable cause existed to suspect that the image released to the public on April 27, 2011 is a “computer-generated forgery.”

The media refused to launch its own investigations to validate or disprove Zullo claims. Instead, as an industry, it employed ridicule and applied the term “birtherism” to the conclusions and Zullo’s ongoing investigation.

Without any evidence of their own, members of the corporate media have stated in a myriad of articles over the last several years that the investigation’s conclusions were “debunked,” a matter with which Arpaio took issue on Friday.

At a second press conference in July 2012, Zullo said that the standard of probable cause in the forgery of the birth certificate image had been surmounted, with Arpaio punctuating the presser by stating that the forgery of a document purportedly belonging to a sitting president constituted an urgent “national security” concern.

Neither the media, Congress nor the FBI was moved to take any action.

The media has constantly characterized the investigation as one in which Obama’s “birthplace” was sought to be determined, a claim Arpaio has refuted (2:43 in video here).

Obama claims a birth in Honolulu, HI on August 4, 1961, although no one in the legacy media has verified that independently with original documentation.

Other articles have erroneously reported that Arpaio said he would “continue” the investigation, which was closed in December following his re-election loss, or that he “is still hunting for Obama’s birth certificate.”

During his remarks at Friday’s press conference, Arpaio said that the results of the investigation were released to the media but ignored in a reference to the final presser held on December 15, 2016. During that presentation, Zullo revealed that two independent forensic analysts confirmed that “nine points of forgery” were copied from an existing Hawaiian birth certificate and placed on the Obama image at the exact same angles, an occurrence which the experts said could not occur coincidentally.

At the conclusion of the December presser, Arpaio indicated that the evidence gathered over more than five years would be turned over to Congress and to “the federal government” (1:04:23 in video here).

“I hope we enlightened you,” Arpaio addressed the media in those concluding remarks.