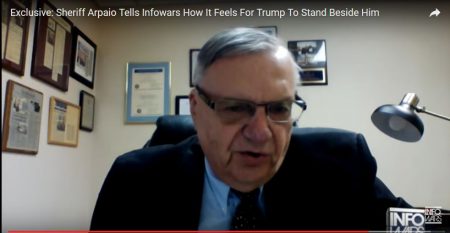 (Aug. 24, 2017) — On Wednesday afternoon, former Maricopa County, AZ Sheriff Joseph Arpaio spoke with Infowars’s Alex Jones about his misdemeanor criminal conviction for contempt of court to which President Donald Trump made reference during a rally in the state on Tuesday night.

During the interview, Arpaio thanked Jones, Infowars writer Dr. Jerome Corsi, and Trump ally Roger Stone for bringing media attention to his situation and contacting Trump about it.

Last week, Fox News’s Gregg Jarrett and Corsi reported that a presidential pardon for Arpaio was under consideration.  Neither knew if it would be issued prior to Trump’s visit to Arizona on Tuesday.

On July 31, Arpaio was convicted by U.S. District Court Judge Susan R. Bolton of misdemeanor criminal contempt stemming from a civil case in which Arpaio was accused of racial profiling.  He is appealing the conviction and continuing to request a jury trial.

At Tuesday night’s rally, Trump had asked his audience, “Do the people in this room like Sheriff Joe?” followed by resounding cheers for more than a minute.  “So was Sheriff Joe convicted for doing his job?” Trump asked to more applause.  “He should have had a jury, but you know what? I’ll make a prediction, OK?  I think he’s going to be just fine,” Trump declared to more raucous applause, apparently referencing the possibility of a pardon for the 85-year-old, six-term sheriff and former DEA agent.

Jones then referenced a “mafia” running out of Austin and other places dealing in Mexican drugs against which Arpaio had battled while Maricopa County sheriff.

After a monologue, Jones changed the subject and said, “The bigger story is, as I said earlier:  Trump didn’t know about this because they’ve got him so isolated,” after which he brought Arpaio back in to the conversation.  “This country’s already in a civil war, and the Democrats started it,” Jones contended.

Arpaio responded that he gave his support to Trump “two years ago at the same forum” where he spoke on Tuesday.  “I’m with him to the end,” he said.

He thanked Jones for “telling it like it is” and “reaching the president” about the criminal conviction and decried the media’s treatment of Trump.

He said that Jones exposed the “abuse of the political system” as it affected him personally as evidenced by the criminal conviction.  “There’s a big story here.  It’s not about me; it’s about our country.  If they can get me, a guy with 55 years in law enforcement, where Holder and Obama started this 60 days after they took office…and I’m sitting at a defense table…and they’re still continuing, going after me on this…I don’t get angry normally, but I’m a little discouraged that the federal government…55 years and this is what I get for it…”

“I’m a little angry, Alex,” Arpaio said of his prosecution following his service to the United States beginning by his enlistment in the Army during the Korean War; as a drug enforcement agent in Turkey, Mexico and other locations; and the six-term elected sheriff of the nation’s fourth-largest county.

“When did you get word this was coming?” Jones asked Arpaio of the possible impending pardon, to which Arpaio said, “I’m watching you.  That’s how I find out. The president has never called me; that’s OK, or his staff.  I was in the dark.”

Arpaio said he did not attend the rally to avoid an already-volatile situation with protesters outside of the Phoenix Convention Center.  “As long as he’s the president, I’ll be supporting him,” he said of Trump.  “He’s a great guy.”

Jones said that “globalists are trying to sell the country out.”

Arpaio said his attorneys, and specifically Mark Goldman, are appealing the conviction on the grounds of judicial malfeasance and other irregularities.  “If they can do it to me, they can do it to anybody, and that’s dangerous for our country,” Arpaio said.

Arpaio reminded Jones that the U.S. Justice Department “went after him” just before early voting began in Arizona last fall.  He denied the “racial profiling” accusation made against him and reminded Jones’s audience that Bolton issued rulings regarding the new Arizona immigration law, SB 1070, which eventually reached the U.S. Supreme Court.

The high court upheld a part of the law which Arpaio indicated his immigration patrols were enforcing and became the basis of the civil case against him.  From there, both civil and criminal contempt charges were advanced and affirmed against Arpaio but dropped against three other co-defendants.

Jones said now is “a time for freedom.”  “Trump isn’t intimidated.  You weren’t intimidated…you know you’re not a racist…you’re doing what you think you need to do…”

Arpaio responded that as an elected sheriff, he did what his constituents wanted.  Without mentioning his name, he said that his successor, Paul Penzone, dismantled what was known as “Tent City,” where inmates lived in the open air.  “Our military are living in tents fighting for their country,” Arpaio observed.

“I’m not going to get into birth certificates right now,” Arpaio then said, referring to objections Penzone had expressed to his tenure as sheriff.  Arpaio said that Penzone was assisted in his campaign by “$4 million” from George Soros.  The reference was to Arpaio’s commissioning of a five-year investigation into the long-form birth certificate image posted at whitehouse.gov said to represent Obama’s original birth record.  After six months of probing, investigator Mike Zullo announced at a press conference that the image is a “computer-generated forgery.”

Arpaio was excoriated and ridiculed by the mainstream media for launching the investigation.

The conversation turned to “fake news,” which Arpaio said exists because Trump “is doing his job.”

Arpaio gave two other interviews on Wednesday on the Fox Business Network and to Sean Hannity of the Fox News Channel expressing some of the same sentiments.