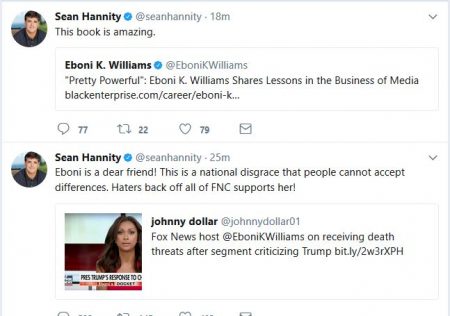 (Aug. 16, 2017) — On Monday’s edition of Fox News Channel’s “The Specialists,” which airs at 5:00 p.m. ET on weeknights, co-anchor Eboni K. Williams led off her legal section of the show by calling President Donald Trump’s comments on Saturday in response to violent altercations in Charlottesville, VA “cowardly and dangerous.”

Williams, a fairly new face on the cable news channel, further asserted that Trump’s initial comments “left out” some Americans, specifically, “blacks, Jews, gays and Hispanics.”  “In a moment where you could have been crystal clear where you stand on the issue of inclusion, standing up against white supremacy and domestic terrorism, you very intentionally chose to be ambiguous and to equivocate,” Williams addressed Trump in absentia.  “‘All sides,’ Mr. President? Please…” she said, referring to language in Trump’s Saturday public address.

We condemn in the strongest possible terms this egregious display of hatred, bigotry and violence on many sides — on many sides.

Ideally we have to love each other.

We agreed that the hate and the division must stop, and must stop right now.

It’s been going on for a long time in our country. Not Donald Trump. Not Barack Obama.

Those remarks were followed by a second statement by Trump on Monday delivered from the White House before “The Specialists” aired with Williams’s commentary.  At that time, Trump said:

I think there is blame on both sides.

I wanted to make sure, unlike most politicians, that what I said was correct, not make a quick statement.

Williams claimed that she “can no longer” give Trump “the benefit of the doubt” and that his brief remarks on Saturday, made before many of the facts were known, showed that he values the support he allegedly receives from “racists.”

Williams then offered Trump something framed as advice on what he could have said to a particular group present in Charlottesville:

“I don’t know what cause or campaign promise you think you are fulfilling when you take to the streets and terrorize non-white Americans, but that is not what I meant when I said ‘Make America Great Again.'”

Hannity had promoted his Wednesday show by stating that “the media is trying to distort President Trump’s comments.”

To this writer’s knowledge, there were no reports that “non-white Americans” were “terrorized” by anyone.  While “white nationalists” and other groups who held a rally in support of maintaining the Civil War monument in the park had obtained a permit to protest, ideological opponents bearing baseball bats, masks and other makeshift weapons had arrived to confront them.

A Breitbart report dated August 12, the day of the altercations and tragic death of Heather Heyer, stated that the police appeared unwilling to keep the two factions apart, a claim supported by Fox News’s Doug McKelway, who was on the ground there that day.

On Wednesday evening, FNC host Sean Hannity attempted to defend Williams’s right to speak her mind in the wake of reported death threats she has received: 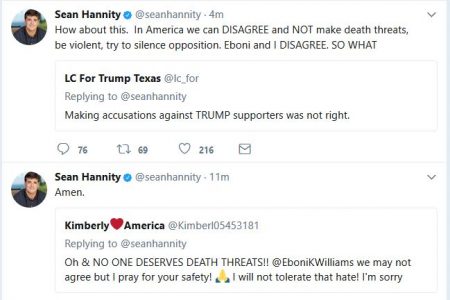 Hannity and other mainstream media outlets said nothing when Americans researching Barack Obama’s credentials received death threats.  In fact, he failed to report that the image posted at whitehouse.gov said to be a scan of Obama’s “long-form” birth certificate was found by criminal investigators to be a “computer-generated forgery” in early 2012 and has avoided the topic completely despite its ramifications in the electoral process and national security.

On March 1, 2012, following a press conference that day in which investigators’ initial findings were announced, Hannity was scheduled to interview lead investigator Mike Zullo.  However, Zullo told The Post & Email that shortly before the show was to air, he was told by the Maricopa County Public Information Officer that the interview was canceled by Hannity’s producers.

Just before his 10:00 p.m. show opened on Wednesday, Hannity offered the following: 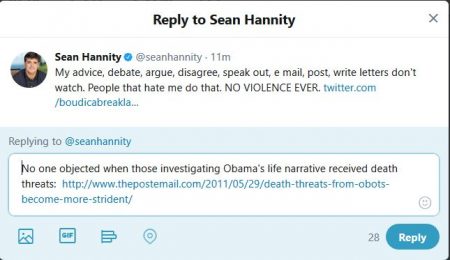