“DEATH AND DESTRUCTION ON A COLOSSAL SCALE”

(Jul. 7, 2017) — “Good evening, ladies and gentlemen, and welcome to a for-sure exciting episode of ‘Pulse of the Nation.’ My name is Roving and I’ll be your host here on the corner under the awning across from the railroad station. We usually don’t book guests for what we call the Impromptu Interviews here on the sidewalk, but our good friend – Professor Zorkophsky — from the university just wrote a book titled, ‘What The Loony Left Doesn’t Want You to Know.’

“Excuse me; just a second, please. Call me ‘Zork’; it makes for a smoother and more friendly atmosphere, at least to me.”

“’Zork’ it is. Okay, Zork, what’s all the excitement about your new book?”

“Well, it’s not anything that even a Hillary supporter can’t figure out but there have been no terrorist attacks in Poland and Japan because there aren’t any Muslims in those countries.”

“Look, let me get this right: so you’re saying that there’s a correlation between the absence of Muslims and the absence of terrorist attacks? Am I right?”

‘Yes, but that’s near the end of the book. The preceding chapters deal with the history of Islam and all of the chaos they’ve caused all over the world. The ‘Bali Bombings’ and the school massacre in Beslan, Russia are individual chapters. And then there’s chapters in every country which has had an attack and are still allowing Muslims to immigrate, such as France, England and the United States. There’s even a subchapter on cruelty to women that’s part of the chapter on cruelty to animals which was done on purpose to let the readers know exactly where women stand in the hierarchy in Islam.”

“Do you have anything to say on sculptures and paintings?”

“Oh, yes, sorry; there’s a chapter on the desecration of statues, buildings and artwork done since the year 700, at least as far as we can document, including the ransacking, burning and totally destroying the library in Alexandria, Egypt.”

“So what in heaven’s name does Islam have to offer the rest of the world?”

“Death and destruction on a colossal scale.”

“So why are people for Muslim immigrants?”

“Because they’re being played, just as the Vietnam anti-war protesters were being played by Ho Chi Minh. Tell a lie enough times and people start to believe the lie.” 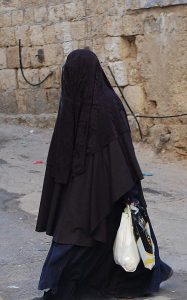 “Take your pick: Islam is a religion; Muslims are misunderstood and peaceful; there’s such a thing as a ‘moderate Muslim’; Muslims are going to assimilate; women have rights under Sharia Law; and so on, so many, in fact, that we don’t have enough time to list them all.”

“So the book is going to be released today? Where’s the book-signing?”

“Sounds like a great plan, and I’ll spring for the burgers: my treat. And so, on behalf of the crew, I’d like to wish you all a goodnight: Goodnight.

“Good show. What do you think the chances are that the world leaders will ever figure out that the people don’t want Muslims in their country? Instead of people chanting, ‘USA! USA!’ maybe they should learn to chant, ‘Deport! Deport!’ Fact is, we’re in a world war – Islam vs. Western Civilization – and if we don’t get with the deporting we’ll be pressed hard to explain to the next generation why we blew it. The message to those in charge: DEPORT!“

“We’re Not Going to Take It”