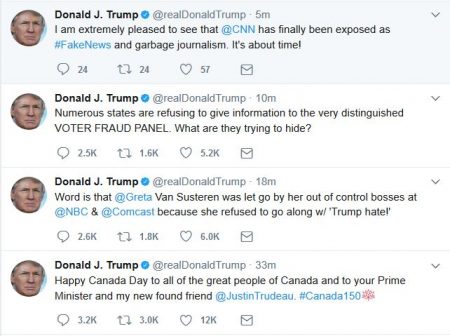 (Jul. 1, 2017) — From his golf club in Bedminster, New Jersey, President Donald J. Trump on Saturday morning offered his views on a range of issues from foreign relations to revelations made by video-journalist James O’Keefe as to the inner workings of “very fake news” CNN, according to Trump.

Trump, his wife Melania and son Barron left Washington on Friday afternoon for the resort at which Trump has spent several of his weekends since his inauguration and where he held cabinet interviews shortly after the November election in which he defeated Democrat Hillary Clinton.

Trump’s first tweet recognized the Canada Day celebration which began on Friday and will run through Sunday.  Having met with Prime Minister Justin Trudeau earlier this year, Trump described him as a “new found [sic] friend,” despite obvious ideological differences.

Trudeau’s statement on the nation’s 150th Canada Day is here.

Trump’s second tweet referred to the departure from MSNBC of Greta Van Susteren, who previously hosted “On the Record” at the Fox News Channel for 14 years and began at her new home only six months ago with a show titled “For the Record with Greta Van Susteren.”

In a tweet on Thursday afternoon, Van Susteren stated only that” I am out at MSNBC.”

MSNBC is a subsidiary of NBC News, which is in turn owned by Comcast.  On January 5, NBC had announced, “Van Susteren is just the latest high-profile former Fox anchor to join the Peacock family. On Tuesday NBC News announced that former Fox News host Megyn Kelly will be joining its network, set to anchor a new one-hour daytime program through the week and launch a Sunday evening news magazine show.”

Of Van Susteren’s abrupt termination, Trump said, “Word is that @Greta Van Susteren was let go by her out of control bosses at @NBC & @Comcast because she refused to go along w/ ‘Trump hate!'”

MSNBC, CNN and other mainstream media outlets have continued their left-leaning presentation of political events which began years ago, now accentuated by their obvious disdain for and dislike of Trump and his administration.

Conversely, mainstream media outlets, as admitted by CNN medical producer John Bonifield in one of O’Keefe’s recent videos, were not critical of Trump’s predecessor, Barack Hussein Obama, a Democrat.

Perhaps most notably, none in the mainstream media would investigate why a poorly-crafted forgery purported to represent Obama’s long-form birth certificate from the state of Hawaii was posted on the White House website on April 27, 2011. TheIr curiosity was dampened, rather than sharpened, following a five-year criminal investigation by former detective Mike Zullo which declared the image a “computer-generated forgery.”

At a third and final press conference in December, Zullo revealed that two well-respected forensic analysts conducted their own respective investigations of the image and arrived at conclusions very similar to his own.

Ironically, Trump was the public voice and persona who first raised on a national level questions as to whether or not Obama was born in the United States and therefore eligible to serve as president, apparently prompting the release of the image.

As former CBS News veteran reporter Sharyl Attkisson has frequently stated, the “legacy” media has crossed the line from neutral reporting of events to “advocacy journalism.”  Attkisson herself became a victim of such advocacy when she was released early from her contract at CBS in 2014 following her in-depth investigation and reporting of the Obama “Fast & Furious” gunrunning operation which CBS chose not to air.

The gunrunning endeavor, which some believe was designed to turn Americans against the Second Amendment, killed Border Patrol Agent Brian Terry, after which then-Attorney General Eric Holder attempted to obfuscate the scope and effects of the failed operation which knowingly sold guns to Mexican criminals.

Third, Trump echoed recent news reports stating that a number of secretaries of state have refused to turn over voter information which the Trump administration requested in its probe of alleged voter fraud led by Vice President Mike Pence and vice-chaired by Kansas Secretary of State Kris Kobach.

As many as 22 states have indicated that they will likely not cooperate with the request or at least harbor objections to it in its current form.

On April 21, CNN criticized the Trump administration for failing to follow through on its intention to probe any voter fraud which might have occurred, particularly in the 2016 election.  Left-leaning media have typically scoffed at the idea that voter fraud is a real problem in the United States.

Organizations which have studied the issue have recently reported that a significant number of illegal-alien votes were cast in 2008 and 2012. In early 2013, Ohio Secretary of State John Husted referred for prosecution 17 individuals found to have voted in the 2012 election.

At that time, Husted said he discovered that Ohio’s voter rolls contained the names of 274 “non-citizens.”

An editorial at Investors.com, citing TruetheVote.com, is titled, “Trump Is Right — Millions Of Illegals Probably Did Vote In 2016.”

Trump’s fourth tweet reflected that he is “extremely pleased to see that @CNN has been exposed as #FakeNews and garbage journalism,” apparently as a result of O’Keefe’s three videos released on Tuesday, Wednesday and Friday of last week depicting to producers as well as commentator Van Jones either admitting that the “Russia collusion” narrative is not supported by hard evidence or contending that American voters are “stupid.”

Yet a fifth tweet referred back to Trump’s controversial allegations from Thursday aimed at MSNBC’s “Morning Joe” co-hosts Joe Scarborough and Mika Brzezinski in which he termed Scarborough “Psycho Joe” and Brzezinski “Crazy Mika.”

Trump’s comments ignited a media firestorm and push-back, including from Brzezinski.  Others claimed that Trump is “not well.”

In Saturday’s tweet, Trump appeared more reserved, stating, “Crazy Joe Scarborough and dumb as a rock Mika are not bad people, but their low rated show is dominated by their NBC bosses.  Too bad!”