BUT WILL FNC MUZZLE HIM? 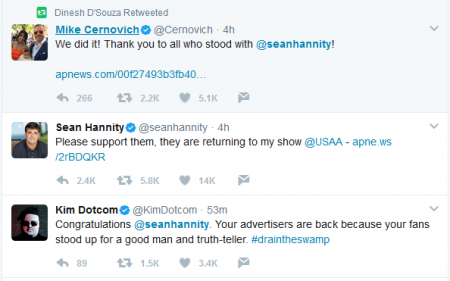 (May 30, 2017) — On Tuesday evening, internet businessman Kim Dotcom tweeted his “congratulations” to Fox News host Sean Hannity for gaining back one of the seven advertisers his show reportedly lost last week after left-leaning media outlets launched a boycott campaign.

Hannity’s targeting by ThinkProgress and Media Matters for America came about after he began investigating the case of DNC staffer Seth Rich, who was killed near his home in Washington, DC on July 10, 2016.

The case has drawn renewed interest since former detective Rod Wheeler stated on May 15 on a Washington, DC Fox affiliate station that he knew of evidence connecting Rich to WikiLeaks, the open-government organization which has published millions of secret documents from countries around the world for the last 11 years.

In a phenomenon which mirrored that which occurred after a criminal investigator declared that Barack Hussein Obama’s long-form birth certificate and Selective Service registration form are forgeries more than five years ago, the mainstream media denounced Wheeler’s claim and attempted to shred his credibility without presenting any evidence of their own to refute it.

In subsequent media interviews over the next two days, Wheeler “clarified” that he himself had not viewed the alleged evidence showing that Rich had emailed WikiLeaks, but rather, that he obtained the information from a federal investigator who spoke to a Fox News Channel (FNC) reporter, Malia Zimmerman.

On May 16, Zimmerman published an article on the subject on which the media immediately pounced as “false.” With pressure growing and Rich’s parents claiming that the theory was nothing more than a hurtful conspiracy, FNC removed the article on May 23.

Conversely, the local affiliate, Fox5 issued a clarification after Wheeler changed his statement but did not succumb to pressure from the mainstream media to retract it or apologize to the Rich family.

As with the birth certificate investigation which found Obama’s documentation fraudulent, the media claimed that the WikiLeaks theory was “debunked,” with the question of who “debunked” it remaining unanswered.

On May 20, Dotcom tweeted that he has evidence that Rich was a WikiLeaks source.  “I knew Seth Rich. I know he was the @Wikileaks source. I was involved,” he said.  After he and Hannity exchanged tweets that weekend, early last week, Hannity promised to host Dotcom on both his television and radio shows.

However, on the evening of May 23, Hannity told his viewers that in deference to the family’s wishes, he would not discuss the story on air at FNC, at least temporarily.  Hannity’s three-hour afternoon commuter-time radio show is not affiliated with Fox.

Early in his coverage, Hannity stated that if Rich is proven to be the source of the emails taken from the DNC’s server and not Russian hackers, the entire narrative that Trump and his campaign aides “colluded” with the Russians during the campaign and the transition period will be negated.

Over the weekend, ThinkProgress rejoiced in the fact that due in part to its efforts, a total of seven advertisers had announced that they would no longer advertise on Hannity’s television show.  Several months ago, a similar campaign launched by the same actors resulted in FNC’s dismissal of well-known commentator Bill O’Reilly after 20 years at the channel and the highest-rated prime-time show on cable news.

The O’Reilly boycott urged advertisers to shun the longtime commentator after The New York Times reported that FNC had paid sums to five women who had accused O’Reilly of sexual harassment in the workplace.

In his article, author Judd Legum made it clear that he objected to Hannity’s tweeting about the Seth Rich story, even if he ceased to report on it on television.  “Since announcing that he would not discuss the Seth Rich murder any further, Hannity has continued to discuss it,” Legum complained, reproducing Hannity’s May 23 tweet to that effect.

In response to the article, one reader commented, “ThinkProgress is the mouthpiece of the chief suspects in the #SethRich assassination — for crying out loud!”

Last Tuesday, Hannity tweeted that FNC bosses did not pressure him to make his May 23 opening statement in which he promised to adhere to the Rich family’s wishes.  In an open letter published the same day at The Washington Post, Mary and Joel Rich stated that anyone claiming to have evidence concerning their son’s murder connecting him to WikiLeaks “is either concealing it from us or lying.”

“Still, conservative news outlets and commentators continue, day after painful day, to peddle discredited conspiracy theories that Seth was killed after having provided WikiLeaks with emails from the DNC,” they wrote. “Those theories, which some reporters have since retracted, are baseless, and they are unspeakably cruel.”

Dotcom, however, said he has such evidence and that it will be borne out if he has the opportunity to present it to U.S. authorities.  Dotcom lives in New Zealand and is currently under house arrest for charges stemming from an internet business he launched in 2005 and shut down by the FBI in 2012.  Approximately $75 million of his assets has been seized by the U.S. Department of Justice about which The Washington Post has also reported.

As a result of Hannity’s advertisers pulling their support, many of his viewers vowed to cancel their USAA accounts and avoid patronizing the other advertisers who followed suit.

Over the Memorial Day weekend, rumors abounded that FNC would terminate Hannity. Tuesday’s events do not appear to support that claim.

Earlier on Tuesday, having returned from his vacation which began last Wednesday, Hannity tweeted a link to an AP story announcing that USAA, which pulled its support from his show last week, had pledged to return.  Legum has not updated his article to reflect that development.

Hannity’s followers have expressed anticipation for his show on Tuesday, the first he will host in a week. 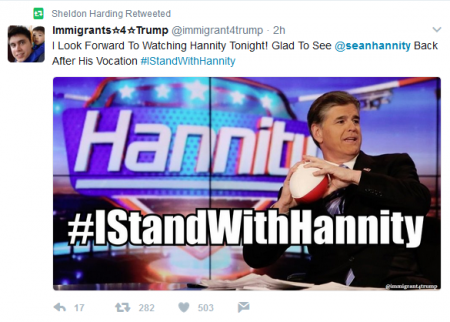 Late on Monday and as pledged by Dotcom on Thursday, Dotcom’s team of attorneys released a letter directed to Special Counsel Robert S. Mueller, who is leading the FBI’s investigation into allegations that Russian operatives hacked the servers of the Democratic National Committee (DNC) and supplied thousands of damaging emails later released by WikiLeaks.

After Mike Zullo declared Obama’s long-form birth certificate a “computer-generated forgery” at a press conference on March 1, 2012, Hannity was scheduled to host him on his show that night, a plan which Zullo reported was scuttled by producers at the last minute.