ALTERNATIVE MEDIA DOES THE JOB THE LEGACY MEDIA WILL NOT 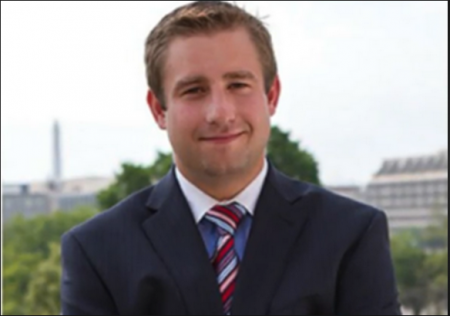 (May 29, 2017) — On Monday morning, Internet businessman and entrepreneur Kim Dotcom promoted a website to whose owner he awarded $1,000 through a contest launched to bring greater awareness to the death of murdered DNC staffer Seth Rich last summer.

Rich’s story jettisoned to the forefront of the news in many quarters after Fox DC affiliate Fox5 aired an interview on May 15 with former DC Metro PD Detective Rod Wheeler in which Wheeler claimed that evidence exists that Rich had communicated with WikiLeaks by email.

As at least one early news report indicates, the theory that Rich was a WikiLeaks source of approximately 44,000 emails and more than 17,000 attachments released beginning on July 22 last year had already been floated. Official reports were sparse, and any results of the investigation by Metro DC police have not been made public. 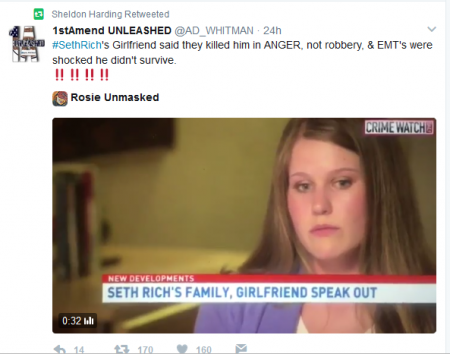 Following Wheeler’s explosive claim, the mainstream media, as if in lockstep, seized upon the opportunity to destroy his credibility after he restated his claim to say that he personally had not viewed the evidence, but rather, had obtained it through a Fox News Channel (FNC) reporter investigating the case.

Wheeler is a Fox News contributor and former DC homicide detective who was privately investigating Rich’s murder.  The family has reportedly since dismissed him.

An article published by FNC on May 16 by Malia Zimmerman cited a “federal investigator” who reportedly told her that the evidence he found on Rich’s computer showed that “44,053 emails and 17,761 attachments” were sent to Gavin MacFadyen, a Wikileaks-affiliated journalist based in London.

“Washington’s Metropolitan Police Department has no suspects and no substantial leaves as to who the killer or killers may be, sources close to the investigation said. Metropolitan Police, including the police chief, have refused to discuss the case, despite requests from Fox News dating back 10 months,” Zimmerman wrote.

The media created a firestorm over the new reportage of the case in an apparent effort to silence anyone investigating it. Subsequently, Fox News pulled Zimmerman’s article on May 23. It was reproduced here.

After FNC’s Sean Hannity aired several segments on the story beginning on May 16 and indicated that he was actively investigating, last Tuesday he announced on air that he would cease publicly reporting about it in deference to the family’s wishes.

Rumors have abounded over the long weekend that Hannity is considering leaving Fox News or will be fired next week following a systematic attack on his advertising revenue orchestrated by George Soros-affiliated “media” outlets for airing the Seth Rich story.

The family has stated that they want the truth but that the theory that Rich was a WikiLeaks source is unacceptable to them and has brought about a continual “nightmare.”  “We know that Seth’s personal email and his personal computer were both inspected by detectives early in the investigation and that the inspection revealed no evidence of any communications with anyone at WikiLeaks or anyone associated with WikiLeaks. Nor did that inspection reveal any evidence that Seth had leaked DNC emails to WikiLeaks or to anyone else. Indeed, those who have suggested that Seth’s role as a data analyst at the DNC gave him access to a wide trove of emails are simply incorrect — Seth’s job was to develop analytical models to encourage voters to turn out to vote. He didn’t have access to DNC emails, Democratic Congressional Campaign Committee emails, John Podesta’s emails or Hillary Clinton’s emails. That simply wasn’t his job,” Joel and Mary Rich wrote on May 23 in The Washington Post.

On May 19, Dotcom declared on Twitter that he possesses evidence showing that Rich was indeed the leaker of the DNC emails to Wikileaks.  “I was involved,” Dotcom said on May 20.

Hannity then stated on his Twitter account that he would be hosting Dotcom on both his television and radio shows in the near future, an intention which was obviously quashed by Fox News producers.  His radio show is independent of his work at Fox.

Last Thursday, Dotcom published an open “cease and desist” letter through the International Business Times (UK) to the Rich family accusing them of “defamation” in both an alleged letter to Hannity’s producers and an article published Wednesday in The Washington Post insinuating that Dotcom had attempted to breach the Gmail account belonging to Seth Rich and now maintained by his father, Joel.

Dotcom served a suspended sentence in Germany for hacking and another for credit card fraud.  He reportedly disclosed those convictions when applying for New Zealand residency in 2010.

The word “debunked” has been used throughout the web by various left-leaning outlets characterizing the theory as a “conspiracy,” although without revealing any of their own investigative work on the case to support that claim.

The media has reacted similarly to allegations of Russian “collusion” with Trump associates appearing in The Washington Post and The New York Times using unnamed sources and more recently, an “anonymous” letter allegedly submitted to The Post in December.  From there, the media has attempted to make the case that Trump faces imminent impeachment, that his senior adviser, son-in-law Jared Kushner is a criminal, and that the White House is “in chaos” without supplying the hard “evidence” of which they accused Trump of lacking when he accused Obama of having “wiretapped” him.

A partially-redacted report obtained by Circa last week from the secretive FISA court shows that under Obama, U.S. intelligence officials regularly performed searches of U.S. citizens’ names in violation of the Fourth Amendment for at least a five-year period.  The “unmasking” of Trump’s first national security advisor, Michael Flynn, and other intelligence leaks both during and after the transition have prompted Trump to call for criminal prosecution of the leakers.

The same media response was seen when speculation arose that Barack Hussein Obama had claimed fraudulent documentation as his own, was not born in the United States, and might not have been constitutionally eligible to serve as president and commander-in-chief.

Obama’s “long-form” birth certificate was first declared a forgery on March 1, 2012 at a public press conference. Nearly five years later, at a third and final presser, investigator Mike Zullo revealed that two forensic experts approaching the image from two different disciplines and two different continents arrived at very similar conclusions to his own. Nevertheless, the media maintained its blackout of the findings, instead stressing that the investigation would soon be “closed.”

The website which Dotcom found worthy of the $1,000 award is Seth Rich.info and contains a video which quickly summarizes his unsolved murder amid speculation that political operatives in Washington, DC know the truth.  Also posted are current articles about the case from the alternative media.

If discovered to be accurate, Rich’s provision of the DNC emails to Wikileaks would dispel the public narrative that Russian “hackers” breached the DNC servers and obtained the emails. Wikileaks founder Julian Assange has repeatedly said that no “state party” was the source of the DNC emails.

WikiLeaks has strongly suggested that Rich was a source and has offered a $20,000 reward for information leading to the apprehension of his killer(s).

The DNC has not offered a reward nor made a recent statement about the new developments.

Also on Thursday, Dotcom tweeted that his legal team will be releasing a letter on Monday addressed to Special Counsel Robert S. Mueller, III, who was hired to oversee the FBI’s investigations into alleged Trump/Russia collusion and Russian interference in the 2016 election. Prior to that announcement, Dotcom had stated that he was willing to submit documentation of his claimed evidence to Congress or to testify in person to U.S. authorities, including Mueller.

A petition asking the White House to appoint a special prosecutor to find Rich’s killers stands at just under 29,000 signatures out of a required 100,000 as of this writing.