AND “REFUSES TO REFUND” 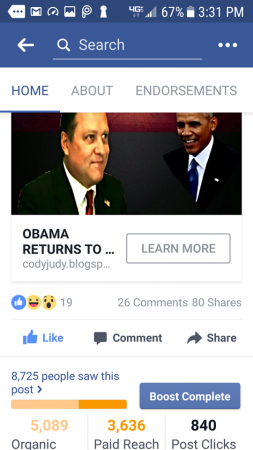 (May 29, 2017) — On Sunday, former presidential candidate and Obama eligibility/forgery challenger Cody Robert Judy informed The Post & Email that an advertisement he paid Facebook to “boost” for two days was discontinued without notice based on Facebook’s claim that he had violated its Advertising Guidelines.

Judy actually ran two ads:  one for two days which achieved close to 9,000 views, and another featuring his latest blog post about Barack Hussein Obama’s designation of hundreds of millions of acres of “national monuments” under the 1906 Antiquities Act.

The second ad carried double the daily fee and was designed to reach up to 30,000 people in two days, Judy reported.  However, it reached only 3,100.  “That’s how fast they cut it off,” he said.

In referring to the Advertising Guidelines, Judy found that the social media giant maintains a policy whereby it can deactivate an ad for virtually any reason.

Judy’s post contends that Obama usurped the presidency of the United States by virtue of failing to qualify as a “natural born Citizen” as required by Article II, Section 1, clause 5 of the Constitution for the president and commander-in-chief.

From there, Judy used the Antiquities Act to illustrate the magnitude of Obama’s alleged usurpation in what he described as a “staggering abuse of Presidential Powers with Obama’s use of the 1906 Antiquities Act established for Presidents to set aside historical sites and create national monuments from federal lands to protect significant natural, cultural, or scientific features.”

Section 2 of the Act states, in part:

That the President of the United States is hereby authorized, in his discretion, to declare by public proclamation historic landmarks, historic and prehistoric structures, and other objects of historic or scientific interest that are situated upon the lands owned or controlled by the Government of the United States to be national monuments, and may reserve as a part thereof parcels of land, the limits of which in all cases shall be confined to the smallest area compatible with proper care and management of the objects to be protected:

Obama’s designation of 46 national monuments, mostly in Western states, consists of a total of nearly 554,000,000 acres and includes vast swaths of Utah and Nevada. Judy maintains that as an illegitimate president, Obama brought about a “constitutional crisis” which includes his setting aside of

While The New York Times reported that doubt existed that Obama’s designations of “protected” areas could be challenged or reversed, President Donald Trump asked his Secretary of the Interior, Ryan Zinke, to conduct a review of 27 of the 46 national monuments Obama identified during his eight years in office by June 10.  Zinke called any reversal of an Antiquities Act national monument, “untested” during his confirmation hearings earlier this year.

Judy provided screenshots to demonstrate how his second ad was progressing in the hours after Facebook approved it.   “The picture on the right shows how well it started off,” he said.  “Virtually every person seeing it was clicking on it. The numbers show it; 55 clicks on 62 paid reaches is a very high ratio.. near 85%!” 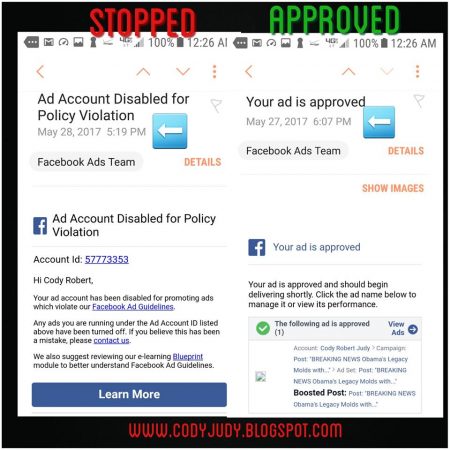 He then speculated, “So they had to have stopped that ad within hours. I didn’t get their email for 24 hours, but compared to the way it started there is no way it died unless they pulled the plug very quickly… maybe 6 hours tops.”

Judy is particularly irritated that Facebook did not refund any part of the fee he paid.

The caption above the image on the right (below) was added by Judy. 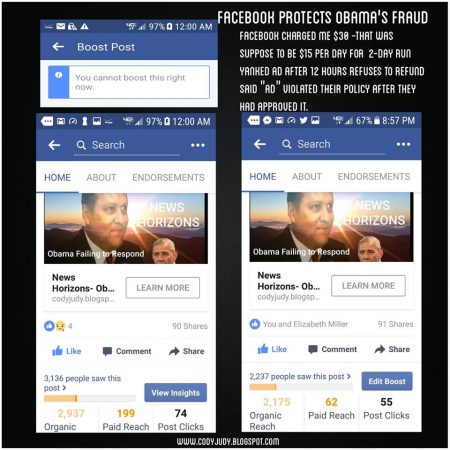 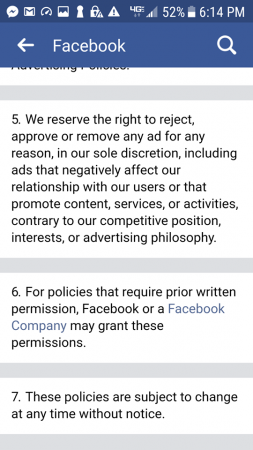 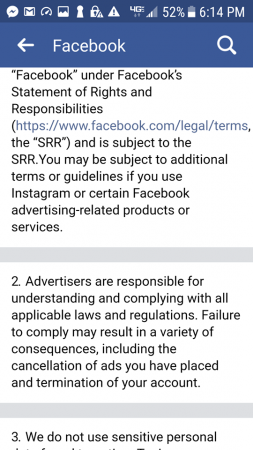 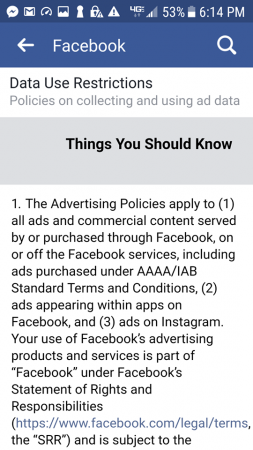 As for the process by which ads are accepted, Judy said, “It takes 15 minutes for them to consider an ad, then it’s approved or denied. Mine were both approved. The second one as we see was taken down by them for violating nothing of any particular specificity.”

Judy opined that Facebook’s removal of his ad does not promote a “free press.”  In the past, others have claimed, and former Facebook staff have admitted, to censoring news with a “conservative” slant, particularly during the 2016 elections.

With his second ad a screenshot from his blog post alleging that Obama was ineligible, Judy said, “I think this Antiquities Act article struck a chord in getting a whole lot more people understanding that the qualification for President is so important!”

When conducting a search on Facebook for the advertising guidelines, a number of posts appear describing users’ disappointment that their ads were also removed reportedly without a valid reason or that Facebook’s “new” guidelines are “outrageous.”

Facebook Ad About Obama’s Alleged Usurpation Shut Down added on Monday, May 29, 2017