WHERE DO THE FACTS LEAD? 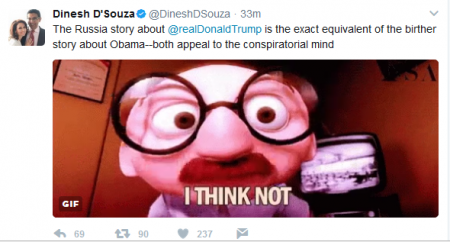 (May 28, 2017) — On Sunday evening, filmmaker, speaker and author Dinesh D’Souza opined on Twitter that “The Russia story about @realDonaldTrump is the exact equivalent of the birther story about Obama–both appeal to the conspiratorial mind”.

The tweet was accompanied by a moving cartoon figure pacing back and forth between a vintage television set and the camera with “COINCIDENCE?” and ” I THINK NOT” as a revolving caption.

D’Souza was referring to the allegation that Trump or his campaign aides maintained inappropriate communications with Russian-government operatives during the 2016 presidential campaign and/or the transition period.  As the mainstream media continues to push the narrative that sinister and “back-channel” connections were made between Trump’s advisors and Russian operatives in Moscow, Trump has reportedly decided to assemble a “war room” to counter what he says is “fake news” propelled by unnamed sources.

Trump has denied that any wrongdoing took place on the part of his campaign aides, current White House staff, or himself.

While the allegations of Russian “collusion” are not considered a “conspiracy” by the mainstream media, as it tells the story, allegations that Obama was born outside of the United States were immediately labeled a “conspiracy theory” when they arose in 2007.

The same phenomenon was replicated when two weeks ago the possibility that the murder of DNC staffer Seth Rich in Washington, DC last July is connected to the provision of thousands of incriminating DNC emails to the open-government group WikiLeaks was deemed a politically-incorrect “conspiracy theory” which was offensive to Rich’s family members.

Over the weekend, unconfirmed reports circulated that Fox News Channel’s Sean Hannity will be terminated this coming week for having aired several segments on Rich’s unsolved murder. Another report states that he will continue to host “Hannity” during FNC’s 10:00 p.m. EDT hour.

Just before going on vacation on Wednesday, Hannity announced that he would not discuss the Rich case further out of respect for the family’s wishes while maintaining on Twitter that he believed he was drawing “close” to finding answers as to why Rich’s life was taken.

Hannity was flagellated by left-leaning media, with ThinkProgress and Media Matters taking aim at his advertisers, some of whom were pressured into withdrawing their support from the show.

As with questions arising from the questionable authenticity of the scant personal documentation Obama released during his eight years in the White House, the theory that Rich had communicated with WikiLeaks prior to his death, and, by extension, that his murder might have been committed in retaliation for it, has become a forbidden subject as dictated by such bastions of truth as The Washington Post, ABC News, NBC News, and others in the “legacy” media.

Meanwhile, Rich’s death remains unsolved while proffered reward money for information leading to the apprehension of his killer(s) has grown to more than $350,000.

“The birther story” refers to the theory that Obama was not born in the United States and by extrapolation, might not be constitutionally eligible to serve as president under the U.S. Constitution.

The section of the Constitution which sets forth presidential eligibility, Article II, Section 1, clause 5, reads:

While some say that a simple birth on U.S. soil meets the requirement, others say that the citizenship of a person’s parents is as important, if not more important, than his birthplace.  One school of thought states that nothing less than a person born in the United States to two U.S.-citizen parents suffices as “natural born.”

Dating back to at least 1995, when Obama decided to seek a seat in the Illinois senate, he has said that he was born in Honolulu, HI on August 4, 1961.  However, numerous credible news reports existed well after that time which stated, respectively, that he was born in Hawaii and Indonesia.

He claims a foreign-citizen father and U.S.-citizen mother.

In May 2012, Breitbart News discovered a 1991 promotional pamphlet published by Obama’s then-literary agent declaring him “born in Kenya and raised in Indonesia and Hawaii.”  The literary agent, Miriam Goderich, immediately responded to the media firestorm by claiming that the narrative as published resulted from her own “fact checking error.”

In January 2006, Will Hoover of The Honolulu Advertiser reported Obama as born in Indonesia, a statement he quickly changed when his “error” was brought to his attention during the 2008 election season, when Obama sought the presidency.

In a unique twist, also during the 2008 campaign season, The Washington Post reported Obama as having been “raised in the Kansas heartland.” That discrepancy, as well, has never been explained, even upon request.

In a 2008 speech regarding what she saw as the importance of HIV testing, Michelle Obama described Kenya as her husband’s “home country.”  Just before the November 2008 election, former New Mexico Gov. Bill Richardson told a Spanish television station that Obama is “un imigrante” (an immigrant).

On December 17, 2007, MSNBC’s Chris Matthews stated on air that Obama was “born in Indonesia.”  Matthews later vilified anyone who challenged Obama’s purported birth in Honolulu.

In 2010, members of the Kenyan Parliament stated on the record that Obama was born in their country, not the United States.

The Post & Email responded to D’Souza’s tweet with, “Except that the birth certificate image was declared a forgery by a 5-yr crim investigation incl 2 other experts:” with the following link:  http://www.thepostemail.com/2017/04/26/obama-birth-certificate-forgery-turns-six/

The link produced the graphic image, title and subtitle of the referenced article published one day prior to the sixth anniversary of the appearance at whitehouse.gov of a “long-form” birth certificate image bearing Obama’s name.  The image was purported to have been a scan of a certified copy of Obama’s original birth record held by the Hawaii Department of Health (HDOH).

Within hours of its publication, several experts went on the record to say that the image was a poorly-crafted forgery.  Those findings and others‘ eventually prompted the launch of a criminal investigation in August 2011 which led to the confirmation that the image is a “computer-generated forgery.”

Also found fraudulent by investigators as reported at a press conference in March 2012 was Obama’s purported Selective Service registration form.  Timely registration with the Selective Service is required by all males present in the U.S., including illegal aliens, between the ages of 18 and 26.  The same requirement exists for those seeking employment with the federal government and applicants for federal student loan programs.

In public statements, Obama has claimed to have taken student loans for his higher education without hinting at the source(s).  A theory has existed since before he was elected president that his Harvard Law School degree was financed by wealthy Saudi Arabians and others with connections to the late Percy Sutton, who was Malcolm X’s attorney.

Obama has not released his passport application or file, an item called for by Donald Trump in May 2014 at a press conference at the National Press Club in Washington, DC.

In 2011, Trump was the first high-profile person to call for the White House to release Obama’s detailed, or “long-form” birth certificate given that the only documentation produced to that time was a short-form “Certification of Live Birth” also termed a forgery by a number of analysts and researchers.

Trump was marginalized and openly ridiculed for calling upon Obama to prove that he was constitutionally eligible to serve as president.  As the pressure mounted in early 2011 for the White House to respond, Trump was deemed the “leader of the birther movement,” and the term “birther” entered the lexicon of political discourse as a pejorative, perhaps indefinitely.

The criminal investigation into the origins of the birth certificate image, led by former detective Mike Zullo, stretched past five years as it took different turns and necessitated travel from Zullo’s home in Arizona to Hawaii twice and to Washington, DC on several occasions.

At a final press conference in December, Zullo disclosed that two forensic analysts he approached for their professional opinions on the birth certificate image arrived at very similar conclusions to his own, a fact virtually omitted from mainstream media coverage of the event.

Neither Congress nor the FBI has investigated.

Is Russian “Collusion” Equivalent to Obama’s Birth Certificate? added on Sunday, May 28, 2017

13 Responses to "Is Russian “Collusion” Equivalent to Obama’s Birth Certificate?"