THEN WHY NOT OBAMA, ABOUT THE FORGERIES? 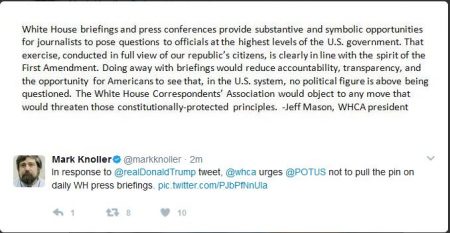 (May 12, 2017) — Early on Friday afternoon, in a response to a tweet issued by President Donald Trump apparently suggesting that White House daily briefings cease and be replaced with written statements, the White House Correspondents’ Association (WHCA) president, Jeff Mason, stated that his organization sees the press conferences as “substantive and symbolic opportunities for journalists to pose questions to officials at the highest levels of the US government.”

Mason hosted the April 29 annual WHCA dinner in Washington, DC which Trump opted not to attend.

Why a Getty photo of Trump apparently shaking hands with reporters labeled, “White House Corespondents’ Dinner, April 29, 2017” appears in an internet search with a Wikipedia entry, given Trump’s absence at the event, is unknown.

“Doing away with briefings would reduce accountability, transparency, and the opportunity for Americans to see that, in the US system, no political figure is above being questioned,” Mason wrote in a statement released on the WHCA website and tweeted by CBS White House correspondent Mark Knoller (pictured above).

On Friday morning, The Post & Email reported on the Trump tweet, which capped a series of tweets he issued on various topics on which the media has recently been focused.

Although possibly erroneous, The Post & Email’s interpretation of the tweet in question was not that Trump intended to cancel the daily press briefings, but rather, that it was issued in response to a question asked by CBS News’s Major Garrett on Thursday.

When called upon by Deputy White House Press Secretary Sarah Huckabee Sanders on Thursday’s briefing, Garrett asked a series of questions focusing on what he saw as contradictions from the White House for Trump’s reasons for dismissing FBI Director James Comey.  Garrett concluded his line of questioning with, “…should reporters and the country essentially wait for a pronouncement from the president before believing that which is stated on his behalf by the White House Communications staff?”

Hanging on every tweet, remark, interview, nuance and leak of information ostensibly emanating from the Trump White House, only one reporter to this publication’s knowledge ever queried the White House press secretary about Barack Hussein Obama’s lack of documentation and evidence of his eligibility to serve as president amidst many published inconsistencies from credible sources.

Article II Section 1, clause 5 of the U.S. Constitution requires the president and commander-in-chief to be a “natural born Citizen,” which most Americans understand to mean “born in the United States.” While constitutional and citizenship questions have become clouded with the passage of congressional statutes and the preponderance of different interpretations, the term “natural born Citizen” has been affirmed by the US Supreme Court to encompass children born in the country to parents who are U.S. citizens.

Whether or not “natural born Citizen” includes those born under different circumstances is a subject of wide debate.

That one reporter was Les Kinsolving of WND, who asked then-White House Press Secretary Robert Gibbs “why the president, who has pledged transparency in his administration, would not release his long-form birth certificate to establish his constitutional eligibility for office.”

The video of the event is no longer available, but this writer recalls the reporters in the room laughing in response to Kinsolving’s seriously-presented question.

Gibbs lowered his head, looked down and attempted to laugh off the question by saying, “Are you looking for the president’s birth certificate? Lester, this question in many ways continues to astound me. The state of Hawaii provided a copy with the seal of the president’s birth. I know there are apparently at least 400,000 people – (laughter) – that continue to doubt the existence of and the certification by the state of Hawaii of the president’s birth there, but it’s on the Internet because we put it on the Internet for each of those 400,000 to download. I certainly hope by the fourth year of our administration that we’ll have dealt with this burgeoning birth controversy.”

Not only did the “controversy” to which Gibbs referred burgeon, but it also instigated a five-year criminal investigation which concluded in December 2016 with what should have been newsworthy revelations nevertheless ignored by the media.

The probe was conducted by a former detective, Mike Zullo, who concluded that a “long-form” birth certificate image released on the White House website nearly three years after Gibbs’s remarks were made is a “computer-generated forgery.”

While Gibbs referred to a “short-form” Certification of Live Birth image, that which appeared at whitehouse.gov on April 27, 2011 was purported to be a scan of a certified copy of Obama’s “long-form” birth record, a document said to be unobtainable by former Hawaii Attorney General spokesman Joshua Wisch.

Less than three weeks before the image was uploaded to whitehouse.gov, then-businessman Donald Trump, who had been outspoken about Obama’s failure to produce it, predicted that a forgery would be presented to the public.

Posted on April 27, 2011 and claimed by Obama to be authentic, the image was pronounced fraudulent almost immediately by several experts, providing the impetus for the criminal probe which began in August of that year.

During an initial press conference on March 1, 2012 stemming from six months of investigation, Zullo reported that not only was the long-form birth certificate image not genuine, but also Obama’s purported Selective Service registration form.

At the presser, Arpaio stressed that his purpose in commissioning Zullo to launch the investigation was to “clear the president.”

Zullo also divulged that several journalists had provided sworn affidavits stating that they received threats after having indicated an interest in exploring Obama’s life narrative. According to Zullo, one reporter subsequently left the country.

Credible reports exist that major media not only ignored, but also suppressed any discussion of the “birth certificate” issue both before and throughout Obama’s years in the White House. In fact, On the evening following the first presser, Zullo was scheduled to appear on the “Hannity” show on the Fox News Channel but was canceled, reportedly by the show’s producer, at the last minute.

During the eighth and final year of Obama’s occupation of the White House, the “controversy” over Obama’s documentation and life narrative remained ongoing, with a third and final press conference in December revealing that two well-respected forensic analysts in different parts of the world had arrived at the same conclusions as Zullo regarding the long-form birth certificate image.

The analysts, who approached their task from different disciplines, identified “nine points of forgery” taken from an existing birth certificate belonging to a woman also born in August 1961 in Hawaii.

Days before the Obama administration ended, then-White House Press Secretary Josh Earnest raised the matter of the long-form birth certificate unsolicited during his remarks to reporters, stating, “There were a wide variety of the president’s critics who were suggesting and propagating conspiracy theories that somehow the president was not born in the United States.  All of you could look at that piece of paper and verify for yourself to be convinced that the charges against the president — that were lobbed against the president — were false.”

During a second press conference on July 17, 2012, Arpaio deemed the forgery of a sitting president’s birth record a matter of “national security,” urging that Congress investigate.  Instead of showing curiosity, the media ridiculed Zullo and Arpaio as the messengers of conclusions they found distasteful.

On Friday, however, during the White House daily briefing, a reporter asked if the firing of former FBI Director James Comey were not a “national security” issue.

In 2014, amidst a controversy which arose after the U.S. Supreme Court issued a ruling on the definition of marriage, then-White House Press Secretary Josh Earnest declared, “No one is above the law. That applies to the president of the United States…”

But to America’s media institutions, it depends who that person is.

WHCA President: “No Political Figure is Above Being Questioned” added on Friday, May 12, 2017

4 Responses to "WHCA President: “No Political Figure is Above Being Questioned”"