“THEY KEPT ME ON A COLD PIECE OF STEEL FREEZING”

(May 2, 2017) — Letters and documents received from a Tennessee inmate on Monday indicate that he is the object of retaliation by correction officers at the South Central Correctional Facility (SCCF) in Clifton, TN.

SCCF is one of four privately-operated prisons in the state of Tennessee despite a law mandating that only one exist.

While at another CoreCivic-operated facility earlier this year, inmate Grenda Harmer reported in late February the unexpected withholding of prescription Prilosec, Naproxen, and Terazosin, each used to treat a different medical condition. The withdrawal of the latter, according to Harmer, will result in the inability of his bladder to perform its expected and necessary function, thereby seriously jeopardizing his health and possibly leading to death.

On Monday evening, The Post & Email conveyed Harmer’s recent reports to Tennessee Department of Correction (TDOC) Communications Director Neysa Taylor.  As of Tuesday morning at press time, we have received no response, which is not atypical.

Harmer expressed in his several letters that he is certain that SCCF staff are retaliating against him for his communications with The Post & Email.  After learning about the newspaper from another inmate at the Trousdale Turner Correctional Center (TTCC) approximately six months ago, Harmer began reporting observed deviations from TDOC policies on the part of correction officers, inmate drug overdoses, and other incidents within the facility.

In addition to the withholding of his medications, prescription eyeglasses, and a foam wedge provided to him following surgery to aid in comfort while sleeping, Harmer has been placed in segregation “pending investigation” on the allegation of “possible attempt to intimidate.” 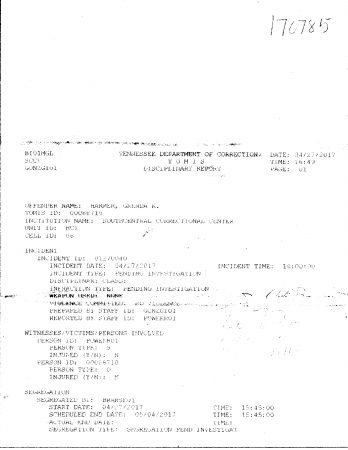 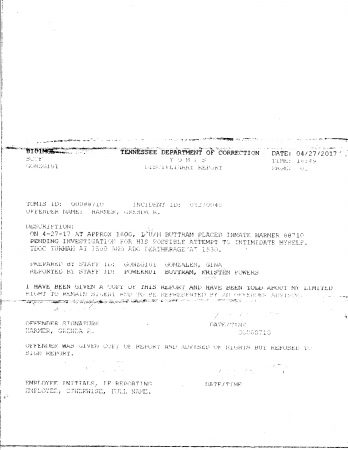 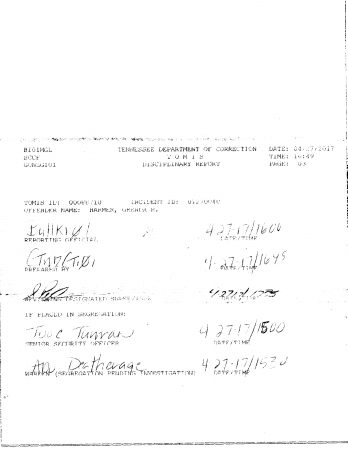 Harmer told us that there is no charge listed within TDOC policies of “possible attempted to intimidate.”

On page 3 of one of the letters he wrote:

Then they kept me on a cold piece of steel freezing. They took, probably let the inmates have it, 1-pair of street boots, 1-set of CL-5 headset, 2-toothpaste, 4-bars of soap, 1-8 oz jar of coffee, 1-4 oz bag of coffee, and 2 deordant. [sic] Oh! They even took my state jacket. I stayed on a piece of steel for about 6 hours freezing.

TDOC policy states that inmates are permitted to receive and send mail.