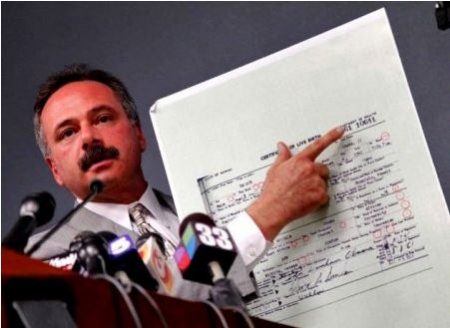 (Apr. 30, 2017) — At the annual White House Correspondents’ Dinner on Saturday night, White House Correspondents’ Association (WHCA) president Jeff Mason told the audience that while access to President Donald Trump and his administration has generally been good since Trump’s inauguration on January 20, journalists on whose behalf he was speaking continue to take issue with Trump’s criticism of their work and mischaracterization of “who we are and what we do.”

“Freedom of the press is a building block of our democracy,” Mason said.  “…It is our job to report on facts and to hold leaders accountable.  That is who we are.  We are not fake news.  We are not failing news organizations, and we are not the enemy of the American people,” he told the ballroom full of journalists, referring to Trump’s frequent characterization of the mainstream media.

In February Trump announced that he would not be attending the event this year as presidents have traditionally done since the event’s founding in 1921.  Instead, Trump chose to give a rally-type speech in Harrisburg, PA highlighting the achievements of his first 100 days in office.

The White House staff followed suit and did not attend.

Trump termed his audience in Harrisburg “much better people” than those attending the WHCD.

The “celebrity” guest at the dinner, Hasan Minhaj of “The Daily Show with Trevor Noah,” decried that “We’re living in this strange time where trust is more important than truth,” perhaps referring to a recent poll which showed that more Americans “trust” the Trump administration over the media’s reporting of events.

Reporters Carl Bernstein and Bob Woodward of Watergate fame spoke and hosted an awards ceremony.  The pair is credited with “bringing down Richard Nixon” as a result of its investigative work in 1973 and 1974.

The evening was termed “a celebration of the First Amendment and good journalism.”

To attend, one must be a member of the WHCA. “Please visit the MEMBERSHIP PAGE of our site to review eligibility requirements” is stated on the right sidebar of the website.

But in 2007, after a new and relatively-unknown U.S. senator from the state of Illinois announced his presidential candidacy, the media cared nothing for “eligibility.”  The “fact” that earlier, credible reports stating that Obama was born in a foreign country were quickly altered or removed from the internet without explanation in true “1984” style was buried.

American journalists acknowledge that there are specific requirements for the nation’s chief executive which are more restrictive than those for U.S. senators and representatives. Article II, Section 1, clause 5 of the U.S. Constitution mandates that the president be 35 years of age or older, have resided in the United States for 14 years or more, and be a “natural born Citizen.”

While a number of attempts have been made in Congress to change the “natural born Citizen” requirement to include naturalized American citizens, they have been unsuccessful. However, in an erosion of constitutional understanding and instruction, those born in foreign countries to foreign-citizen parents are now deemed by many in the media and academia to be “natural born Citizens” without consideration for the Framers’ intent when including the term.

Further discrepancies in Obama’s life story arose in 2009 when NBC News, narrated by later-disgraced anchor Brian Williams, produced a documentary of Obama’s cataclysmic rise from Illinois state senator to U.S. Senator to the White House in the space of approximately a dozen years.

When Donald Trump began calling for Obama to release documentation showing that he was born in the United States, which Trump insisted is necessary for the president and commander-in-chief, the media excoriated, ridiculed and marginalized Trump in total avoidance of the “elephant in the room,” a term used by Minhaj on Saturday night to describe Trump.

After approximately three months of Trump’s very public effort to coax Obama to release his detailed birth certificate, the White House posted what it said was a scan of a certified copy of Obama’s “long-form” birth certificate from the Hawaii Department of Health (HDOH) in Honolulu.

Strikingly, several experts declared the image a forgery almost immediately after it was published, a fact the mainstream media completely avoided. In fact, Fox News went to the trouble of misquoting a Canadian document analyst as having vouched for the image’s authenticity and failed to correct the record after the analyst spoke out.

Rather than seeking the truth about Obama’s birthplace, background, and actual life story, the above media companies and others have worked assiduously to shroud a 5+-year criminal investigation into the long-form birth certificate image bearing the name of their political idol which was found to be a “computer-generated forgery.”

The media cannot say it has not been informed, as three press conferences held while the investigation was ongoing successively revealed more information and evidence as to how investigators became convinced that Obama’s only proffered personal documentation is fraudulent.

The media did nothing other than provide some scant reporting of what was said, often using ridicule and derision to discredit the messengers.

At a second press conference on July 17, 2012, Zullo revealed further evidence and methodology which convinced investigators that the standard of probable cause in the forgery of the birth certificate image had been surpassed. At that point, Maricopa County Sheriff Joseph Arpaio, who commissioned the investigation, called upon Congress to open its own probe in the interest of “national security.”

The media instead pushed back, and neither Congress nor the FBI showed the least bit of curiosity as to how an image purported to represent an official government birth document bearing the name of the putative President of the United States could have been fraudulently created and disseminated “with the intent to deceive.”

A final press conference on December 15, 2016 revealed that two forensic analysts approaching the birth certificate image from different disciplines agreed that it cannot possibly be authentic given the identified “nine points of forgery.”

Again, the media attempted to deflect attention from the significance of the findings by stressing that the investigation was officially “closed.”

If the U.S. media really wanted the truth, it could have discovered it long ago. Having become multi-million-dollar enterprises amid competitions for which female anchors can dress the most revealingly, they have had the means and the opportunity to have embarked on their own investigations to verify or disprove Zullo’s findings.

To America’s so-called “journalists” and their corporate puppeteers:

If you were really investigative reporters, your curiosity would have been piqued beyond measure that the “documents” produced by the White House bearing Obama’s name were found to have been the creation of someone committing federal-level felonies. You would have naturally asked, “Who would do such a thing, and why?”

You would have wanted to be the journalist to break the story wide-open.

If you were doing your job, you would have attempted to discover who uploaded the long-form birth certificate image to the White House website on April 27, 2011.

If you really cared about the First Amendment and “freedom of the press,” you would have allowed Zullo to interview on the Sean Hannity program following the first presser on March 1, 2012 instead of canceling his appearance at the last minute.

If you really wanted to arrive at the truth, you would been competing for an interview with Zullo after he testified in federal court in November 2015 about government surveillance and the role of a confidential informant in the Obama birth certificate saga.

If you sincerely wanted to “hold leaders accountable,” you would have asked the House Oversight and Government Reform Committee chairman and others why they did not launch an investigation into the reported forgeries, then approached the U.S. Justice Department and FBI on the matter.

If you weren’t “fake news,” you would have discovered and reported Obama’s true background before the 2008 election instead of parroting his concocted life narrative.  How many lives might have been saved had you adhered to your claimed purpose?

If you weren’t terrified of what the truth holds, you wouldn’t have obscured and misled the public about the “foundational lie” on the White House website on April 27, 2011.

But that is NOT who you are. That renders you “fake news,” “failing news organizations,” and “the enemy of American people.”