CAN A “KENYAN” BE PRESIDENT OF THE UNITED STATES?

(Apr. 29, 2017) — On the Twitter timeline of Auma Obama, said to be Barack Hussein Obama’s half-sister, a spirited discussion took place on Inauguration Day, January 20, regarding a tweet she appears to have issued stating that her half-brother is “Kenyan.”

The tweet was an addition to Auma’s earlier one in which she recognized Barack Obama, who she called “lil brother,” as the “1st AFRICAN AMERICAN PRESIDENT of the United States of America.” 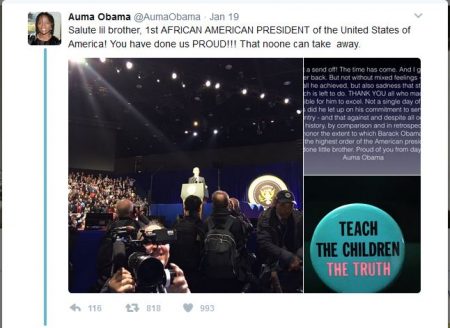 Responses to Auma’s tweets were both positive and negative, with one Twitter commenter stating, “yes indeed!  History made.  The first African American to lead the world….but the most awesome thing is that He is our own…”

Another, perhaps referring to Kenya or Africa, tweeted, “Let him come home we celebrate this legacy in style.”

The conversation appears to have been reignited after Barack Obama’s purported half-brother, Malik, on March 10 referenced an image believed by some to be proof that Barack Obama was born in Kenya, not Hawaii, as he claims.  Shortly therafter, the image was recirculated in Auma’s Twitter timeline, with some identifying it as “fake” and others saying it is “real.”

One response linked the Latin term “jus soli,” defined by Merriam-Webster as “a rule that the citizenship of a child is determined by the place of its birth,” to Barack Obama’s eligibility to have served as president and commander-in-chief.  “Sorry, but only US born persons can b prez.  ‘En soli’ per the constitution,” “Deplorable Christine” wrote.

A number of individuals became more specific, referring to the presidential eligibility criterion of “natural born Citizen,” as stated in Article II, Section 1, clause 5 of the U.S. Constitution.

On March 13, when the discussion appeared to reach a high point, “Colin R Brophy” issued a tweet containing the audio of an interview between “Freedom Friday” host Carl Gallups and his guest, Mike Zullo. 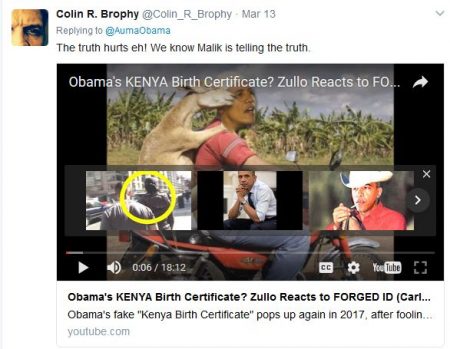 The audio came from Gallups’s March 10 broadcast, when Zullo, who conducted a five-year investigation into the “long-form” birth certificate image posted at whitehouse.gov in 2011, said definitively that the image of the purported Kenyan birth certificate is “fake.”

The show had focused on Zullo’s description of information gleaned from a former confidential informant for the Maricopa County Sheriff’s Office (MCSO) for then-Sheriff Joseph Arpaio concerning surveillance of American citizens without a warrant.

The informant, Dennis Montgomery, is a former NSA and CIA contractor who said that widespread government surveillance was conducted on prominent U.S. citizens, including federal judges and Donald Trump, between 2004 and 2010.

Zullo provided oversight to Montgomery’s work for the MCSO for approximately a year until U.S. District Court Judge G. Murray Snow effectively halted Montgomery’s progress.  At the time, the birth certificate investigation was ongoing and acknowledged by Snow.

On April 27, 2011, the birth certificate image was posted in apparent response to strident calls from Trump earlier in the year for Obama to prove that he was constitutionally eligible to serve as president.

Since 2007, credible reports had surfaced claiming that Barack Hussein Obama was born in Kenya or Indonesia, some of which were later altered to fit Obama’s “born in Hawaii” narrative.  One such article was tweeted in Auma Obama’s timeline on March 14: 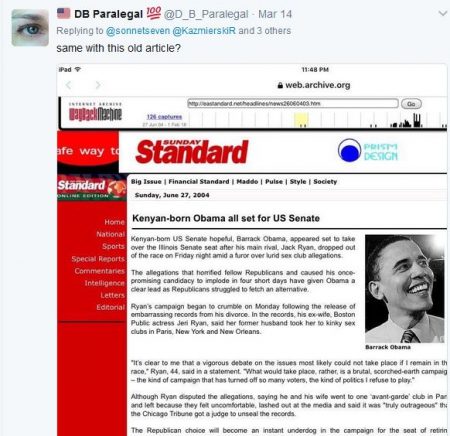 Soon after its release, the birth certificate image was declared a poor forgery by several experts on the record, ultimately leading some of Arpaio’s constituents to request a formal investigation.  Arpaio agreed and delegated the project to his volunteer “Cold Case Posse,” led by Zullo.

During the probe, Zullo and Arpaio gave three press conferences on March 1, 2012; July 17, 2012; and December 15, 2016, respectively, to divulge their findings.  At the second presser, Arpaio called upon Congress to launch its own investigation into Zullo’s conclusion that the birth certificate image is a “computer-generated forgery.”

Also found fraudulent and revealed at the first press briefing was Obama’s purported Selective Service registration form.  The Selective Service System subsequently denied Zullo and Arpaio access to a certified copy or the original allegedly held in its archives, then suggesting that the original had been destroyed.

The December 2016 press conference revealed that two well-respected forensic analysts found the birth certificate image to contain “nine points of forgery,” thereby precluding it, in their expert opinions, from having originated with a real, paper document.

But there never was a “piece of paper,” only an image on a computer screen.

Years ago, Zullo said publicly that the image was published “with the intent to deceive.”

Strangely, the mainstream media has shown no curiosity about what could be the most significant political crime in U.S. history.