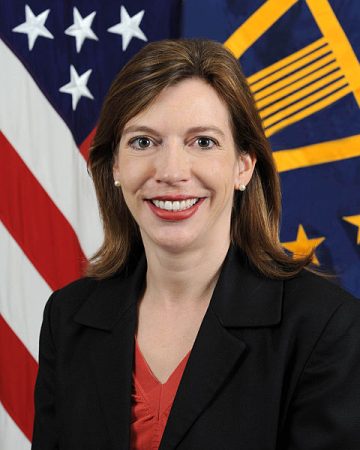 (Apr. 8, 2017) — In an interview published on February 16 with Vox.com, former Deputy Assistant Secretary of Defense Evelyn Farkas, who notably told MSNBC on March 2 that she was urging remaining Obama-regime employees to collect information on alleged connections between Donald Trump and the Russian government, said that an “independent investigation” was needed based on “winks and hints” she received “from inside.”

In her March 2 interview, Farkas claimed that intelligence leaks early in the Trump administration occurred because “people were worried” about nefarious connections between Trump and/or his campaign aides with the Russian government.

Farkas left her post at the DOD in 2015 to work on the Clinton presidential campaign.  In her interview with Vox’s Ezra Klein, she said that she was relieved that Trump’s first national security adviser, Lt. Gen. Michael Flynn (Ret), had resigned from “the perspective of US foreign policy.”

Farkas did not cite any specific ties Flynn might have had to Russia.  However, one of Flynn’s communications from the transition period which was leaked to the press indicated that Flynn had told Vice President Mike Pence that he had not broached the topic of “sanctions” with Russian ambassador Sergey Kislyak when in fact, he had.

The inconsistency caused Flynn to tender his resignation on February 13 after Trump reportedly requested it.

Farkas said that an investigation of Trump should ensue to determine if he were “susceptible to blackmail from a foreign entity or individual.”

“There’s the possibility of blackmail based on giving money or lending money or guaranteeing something. There could be some hanky-panky that opens the president up to blackmail,” she speculated.

“It’s like you’re trying to do a security clearance on the president. The intelligence agencies want to make sure there’s no undue foreign influence on him,” Farkas further elucidated.

As Fox News reported, prior to and after Trump’s inauguration, Farkas spoke with a number of media outlets, including publicly urging Obama to “share with the public the information the FBI has to date on the Dirty Dossier,” an unverified compilation of documents published by BuzzFeed News to much criticism.  “Trump should explain the full extent of his ties with the Kremlin and influential Russians,” Farkas asserted.

Thus far, the FBI has admitted to an active investigation into possible Russia-Trump ties but has not provided any insight into any evidence which might have been uncovered.  The U.S. House and Senate Intelligence Committees, too, are carrying out their own investigations into alleged Russian connections.

Trump’s aides have denied any inappropriate communications with Russia, and Trump has said he has no investments or business dealings in Russia or relationship with Russian President Vladimir Putin.

Farkas’s Newsweek editorial, written on January 12, contains speculation which may or may not be founded in fact.  Of the “Dirty Dossier” said to have contained evidence collected by the Russians which could be used to blackmail Trump, Farkas wrote:

The U.S. intelligence officials—no jokers—decided that the matter was serious enough to warn Trump. Whether the information is partly true, all true, partly false or all false, the dossier, compiled by a former British intelligence officer as part of opposition political research on Donald Trump, cannot simply be dismissed. Indeed, it seems unlikely that is was entirely fabricated, because the intelligence community chose to forward it to Donald Trump and we haven’t heard a disavowal of it from them.

Their silence, for now, could indicate there is something to it.

Farkas did not explain why she appeared to have been privy to classified information after having left government employment in October 2015 to work on Clinton’s campaign.

Although Farkas saw the need for further vetting of Trump, none in Congress or within the federal government saw a similar need to conduct a “security clearance” check on Obama, who when elected had presented no documentation to the American people that he was eligible to the office.

While Farkas’s speculation is considered credible by the mainstream media, those questioning Obama’s eligibility were scorned as “racist” and as touting “conspiracy theories.”

Before Obama became nationally-known, numerous credible reports stating that he was born in a foreign country were published.  The Associated Press, NPR and The Honolulu Advertiser had previously reported him as born in Kenya and Indonesia, respectively, a fact that the Obama White House was never asked to explain.

During 2007 and 2008, many Americans became “worried” that Obama might not be a “natural born Citizen,” as is required by Article II of the U.S. Constitution for the president and commander-in-chief.  The 110th Congress refused to investigate.

Governors, state attorneys general, law enforcement and members of the 2008 Electoral College refused to probe the matter, and Obama was cleared to be inaugurated in January 2009.  Despite concern expressed by many of their constituents, no member of Congress submitted a written objection calling for deliberation on his eligibility.

In 1991, Obama’s literary agent reported that he was “born in Kenya and raised in Indonesia and Hawaii” in a biography published in advance of his first book.

While in 2008, The Washington Post described Obama as “raised in the Kansas heartland,” the AP reported years earlier that he was born in Hawaii and taken to Indonesia at age 2 by his mother upon her remarriage.  He was reported to have attended school there “through the fifth grade,” but Obama’s life narrative states that he lived in Indonesia between the ages of 6 and 10.

On June 12, 2008, an image said to be “Obama’s birth certificate” was posted at The Daily KOS and several other websites, including Obama’s “FighttheSmears” campaign website.  The image was quickly denounced as a forgery by a number of experienced analysts.

Further, in April 2011, after months of urging by Trump, who was then contemplating challenging Obama in the 2012 election, the White House released what it said was a scan of a certified copy of Obama’s “long-form” birth certificate obtained from the Hawaii Department of Health (HDOH).

Graphics and computer experts almost immediately deemed the more detailed image a forgery, although the mainstream media appeared to accept it at face value.

While some Americans were concerned that Obama could be blackmailed, the intelligence community took no action to protect U.S. national security.

In August 2011, a criminal investigation commissioned by then-Maricopa County Sheriff Joseph Arpaio was launched with the purpose of authenticating the image to assure “worried” voters that their votes in the upcoming election would not be disenfranchised, but after Arpaio’s “Cold Case Posse” performed an initial examination, its members were unable to clear the image.

The investigation, led by Mike Zullo, continued, stretching out for more than five years.  During that time, Obama’s purported Selective Service registration form was declared fraudulent, and it was discovered through a FOIA request that airline manifests which should have been in the possession of the National Archives for the days preceding and immediately following Obama’s birth are missing.

The National Archives was unable to explain why the data was missing from the microfilm rolls it provided to Zullo and Dr. Jerome Corsi, an investigative reporter working on the case at the time.

At the conclusion of the probe in December, Zullo spoke at an hour-long press conference, informing the public that two separate forensic analyses of the long-form birth certificate image resulted in very similar conclusions to his own: that it could not have originated with a real, paper document.

Zullo has called the birth certificate forgery “the foundational lie” of Obama’s presidency.

While Congress continues to investigate alleged Trump-Russia ties, it has ignored the evidence which Zullo, Arpaio and millions of Americans believe should have prompted a congressional investigation years ago.

While the FBI expends resources on the same issue, it apparently never investigated Obama’s background, life story or fraudulent documentation.

The forgery of a government document is a federal felony which the FBI, Congress, Democrat operatives and the media continue to ignore, ridicule and deny.