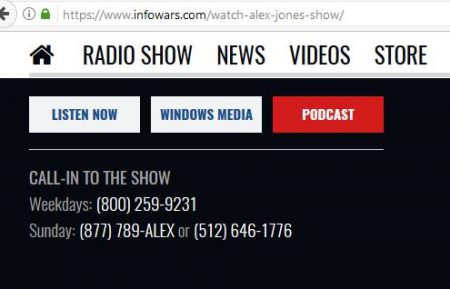 The discussion is centering on “identity theft” as evidenced by 150,000 Maricopa County bank accounts which former NSA contractor Dennis Montgomery reported to then-Maricopa County Sheriff Joseph Arpaio in 2013 were breached by the U.S. intelligence community.

Zullo said that after Arpaio investigated the bank accounts appearing to belong to his constituents, evidence showed that they were fake.

Zullo drew a connection between the 2015 demand of U.S. District Court Judge G. Murray Snow to collect Montgomery’s work product from his activity as Arpaio’s confidential informant and the federal government’s alleged tampering in the civil case against Arpaio as reported by Dr. Jerome Corsi on Monday.

Jones suggested to Zullo that U.S. whistleblowers are currently facing a life-and-death situation.

At Arpaio’s request, Zullo investigated the authenticity of Obama’s long-form birth certificate, declaring it on March 1, 2012 to be a “computer-generated forgery.”

To listen to the show, scroll down to click on “Listen Now” as shown above.