BUT FOR HOW LONG? 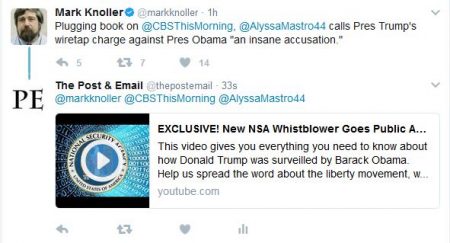 On Sunday evening, Alex Jones of Infowars issued a number of reports, including a written report by Dr. Jerome Corsi, stating that credible documenation had been gleaned from former Maricopa County Sheriff Joseph Arpaio and former detective Mike Zullo showing that Trump, his children and a number of his managers within the Trump Organization were placed under constant surveillance by the US intelligence community between 2004 and 2010.

Zullo and Arpaio obtained the documentation from former NSA contractor Dennis Montgomery, who worked as a confidential informant for Arpaio for about a year, ending in early 2015.  With the assistance of Atty. Larry Klayman, Montgomery shared the information he had compiled with U.S. District Court Judge Royce C. Lamberth, who then reportedly arranged with FBI Chief Counsel James Baker for Montgomery to testify to two FBI agents later in 2015.

In his almost-daily video and written reports, Klayman has said that 156 judges, Donald Trump, U.S. Supreme Court Chief Justice John G. Roberts and others were surveilled illegally by the U.S. government.

In a second tweet, Knoller reported that the CBS guest, Alyssa Mastro, additionally said on CBS This Morning that “former Obama aides” are angry at the accusations, although Mastro used a different word to express the emotion.

The Post & Email responded to both of Knoller’s tweets with a link to an Infowars broadcast, now on YouTube, and an article published here based on Corsi’s article.

Knoller’s Twitter feed does not show responses to his tweets, but they appear in The Post & Email’s timeline. 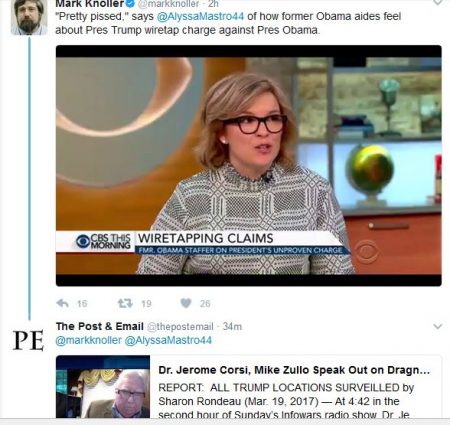 Between August 2011 and December of last year, Zullo served as the lead investigator of the probe into an image posted on April 27, 2011 by the Obama White House claiming it to be a scan of a certified copy of his long-form birth certificate from the state of Hawaii.

The 5+-year investigation found not only the birth certificate image to be fraudulent, but also Obama’s purported Selective Service registration form.

On December 15, 2016, Zullo and Arpaio held a third and final press conference detailing their findings on the matter, with Zullo revealing that two well-known forensic analysts studied the birth certificate image and arrived at very similar conclusions as his investigation had.

The mainstream media has failed to report the significance of those findings and has not sought interviews with Arpaio or Zullo in the aftermath of their release.

On Sunday evening, Corsi said that he had met with a top-ranking member of the U.S. House of Representatives last week and expressed an intention on Zullo’s part to travel to Washington this week to share the documentation with the White House.

FBI Director James Comey is currently testifying to the House Intelligence Committee concerning the “reported investigations into contacts between the Trump campaign and the Russians, and President Trump’s wiretapping claims,” referring to Trump’s unexpected accusations declared on Twitter on March 4.

Also reportedly under investigation is whether or not the Russian government interfered in the 2016 elections as well as the topic of cyber-security.