MUST SKIP TWO MEALS A DAY TO “REDUCE PAIN”

(Mar. 8, 2017) — An inmate at the Trousdale Turner Correctional Complex (TTCC) wrote in a letter received on Monday that the emergency grievance he filed over the abrupt discontinuation of his two prescription medications has not yet received a response.

TTCC is owned and operated by CoreCivic, which has been completely unresponsive to The Post & Email’s requests for comment as to the allegations made by many inmates that they do not receive their physician-prescribed medications on a regular basis, if at all.

It has been widely speculated that medications are not dispensed in order to positively impact the company’s bottom line.

TTCC has been described as “the worst facility” in Tennessee’s prison system by an inmate who has been resident at virtually all 14 facilities.  The Tennessee Department of Correction (TDOC) has insisted that the reports of gang activity, short-staffing, constant lockdowns and lack of medical care are “inaccurate,” while reports continue to come in from inmates and their relatives corroborating one another on the dangerous environment within.

Beatings of inmates by correction officers have been reported, as have illegal drug use and consequential death.

In his letter, dated February 27, 2017, the inmate wrote, “I’ve been cut off my Prilosec and Tums I need for my acid reflux. And I’ve been in a lot of pain. Tonight I feel good because one of my associates gave me a Prilosec. So I’m taking care of everything that is important to me tonight. You are at the top of the list. I discovered if I eat only breakfast and go hungry the rest of the day it reduces my pain. Once this Prilosec wears off its [sic] back to the pain.” 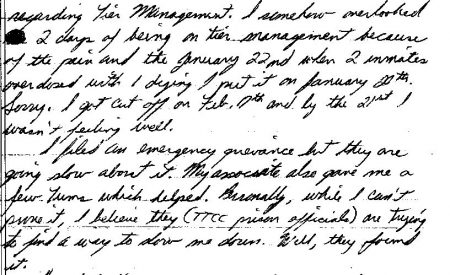 Regarding the mistake the inmate said he made due to his suffering health, The Post & Email checked and found that he had, in fact, expressed the date of the death of the inmate due to a drug overdose as January 22.

His letter continued, “I filed an emergency grievance but they are going slow about it. My associate also gave me a few Tums which helped. Personally, while I can’t prove it, I believe they (TTCC prison officials) are trying to find a way to slow me down. Well, they found it.”

Acid reflux disease causes heartburn and other digestive disturbances and, if left untreated, can lead to GERD, which causes ulcers to form in the esophagus. Swelling of the esophagus, or esophagitis, can also occur, causing “strictures” and difficulty swallowing.

According to WebMD, GERD elevates the patient’s chances of developing esophageal cancer.  Health.com quotes Anish Sheth, MD, assistant professor of digestive diseases at Yale School of Medicine, as stating of the condition, “If you have acid exposure in the esophagus for even as little as a few weeks, you can develop inflammation of the lining, It can be very uncomfortable, even painful, and can leave the esophagus vulnerable to even more harmful erosion or scarring.”