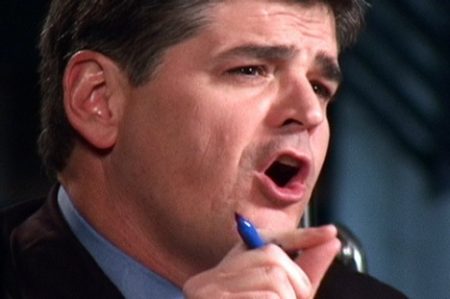 (Mar. 8, 2017) — At the opening of his 10:00 p.m. EST show on Wednesday, Sean Hannity stated that new information is available supporting the claim that a FISA warrant was issued for U.S. intelligence agencies to surveille a computer server in Trump Tower prior to the November 2016 presidential election.

He suggested that Barack Obama and his supporters are attempting to “sabotage” President Donald Trump’s administration.

Hannity introduced Sara Carter of Circa News, who said that brand-new information coming to her just before her appearance shows that two investigations were in progress in October, one of which emanated from the FISA warrant, and the other carried out by the FBI without the need for a FISA warrant.

Carter works with former longtime AP reporter John Solomon.  Carter said her sources had a “direct” connection with FBI agents who performed one of the investigations, and she confirmed the existence of a FISA warrant acted upon in October on the Trump Tower server.

“It was a completely separate incident,” Carter said of the FBI’s probe.  “The inspector general at the DOJ is now investigating.”

She said that her sources say that “nothing was found” on the Trump server to cause concern for law-enforcement agencies.

Carter said that it is thought that the FISA warrant “had to do with the Russian hacking on a very broad level,” referring to the allegations that Russia interfered in the U.S. elections.

Hannity called out the mainstream media for failing to investigate Donald Trump’s allegation made Saturday morning on Twitter that Barack Obama had “ordered” the Trump Tower server “wiretapped.”

Referring to Obama’s statement, made through a spokesman, that he did not “order” the alleged wiretapping, Hannity asked Carter if Obama “knew” about it, to which Carter responded, “We believe that people were briefed on this,” meaning the October FISA warrant.

She then posited that the surveillance had become “politicized.”

During his opening monologue, Hannity also contended that a concerted effort exists to delegitimize Trump and destroy his administration and presidency.

Hannity is not alone is that observation.  Last night, commentator Monica Crowley voiced a vehement warning to Trump that an organized, intense effort is under way to remove Trump from office.  Other commentators have referred to a “deep state” or “shadow government” supportive of Obama which sees Trump as illegitimate and not worthy of the office of the president.

While interviewing former Speaker of the House Newt Gingrich after Carter’s appearance, Hannity repeated that Obama broadened the number of agencies and intelligence employees who could see top-secret information just prior to his departure from office on January 20.  Intelligence leaks of Trump’s telephone calls to the Mexican president and Australian prime minister as well as national security adviser Michael T. Flynn’s calls to the Russian ambassador were leaked, which observers agree is a felony.