Is the Democratic Party Worth Saving?

OR HAS IDENTITY POLITICS DESTROYED IT? 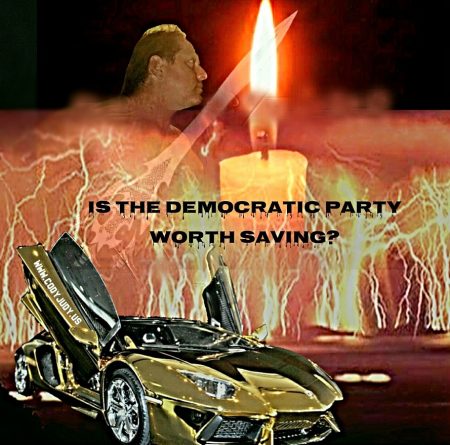 (Mar. 8, 2017) — Solutions to the problems the Democratic Party faces may be so far removed from the Democratic Party Establishment that they crash through left field and knock themselves out crashing through the left field boundary wall of the United States of America political ball field. Identity politics has paralyzed them to the point where individuals have replaced individual rights and the gap left between their leaders and the country in understanding that is unrecognizable.

It’s the complete opposite of being a part of the United States of America and having good ideas for Justice for ALL, and if you take a look around Democrats you have lost over 1,000 races since the King of Identity Politics usurped the U.S. Presidency because he was black and could win. The long-term affect of identity politics is akin to a sugar high that lifts one up quickly and drops you down very low just as fast.

This is what the Democratic Party has bought in to with “The first black President who was actually half white”; the first “Don’t you want a woman for President?” candidate who has lost twice now. It is just not an unlimited magic-hat trick that is going to make the Democratic Party great again, and when an individual replaces individual rights, the emphasis is on tyranny of ONE and not on civil rights that has the power of ALL.

What if Donald Trump and Hillary Clinton Had Swapped Genders?

What was proposed was essentially what I would call a critique on WISDOM and the fact that regardless of gender, race, color, or anything else, wisdom is noticed no matter whose mouth it is coming out of. Of course they conducted the experiment with the emphasis on gender and what they thought would be a slam-dunk for identity politics.

If Trump’s words were replaced by Hillary’s words, and if Hillary’s words were replaced with Trump’s words, would the verdict of the election have been the same? You could almost sense they hoped the verdict would not be the same and that if Hillary spoke Trump’s words she would NOT have won, proving that a woman has a proverbial character flaw which makes her a victim and thus warrants a greater tipping of the scales for justice rooted in wisdom and understanding.

Just the opposite happened. The Trump actress who spoke Hillary’s lines in the debate was disliked more. The Hillary Clinton actor who spoke Trump’s lines was liked more.

People across the board were surprised that their expectations about what they were going to experience were upended.

We both thought that the inversion would confirm our liberal assumption—that no one would have accepted Trump’s behavior from a woman, and that the male Clinton would seem like the much stronger candidate. But we kept checking in with each other and realized that this disruption—a major change in perception—was happening. I had an unsettled feeling the whole way through.

The simplicity of Trump’s message became easier for people to hear when it was coming from a woman—that was a theme. One person said, “I’m just so struck by how precise Trump’s technique is.” Another—a musical theater composer, actually—said that Trump created “hummable lyrics,” while Clinton talked a lot, and everything she was was true and factual, but there was no “hook” to it.

What this proves is that Hillary Clinton could have easily won the election if she was not so intensified on anti-American and divisive identity politics. Hillary Clinton actually succeeded in turning off half the country, and Donald Trump succeeded in communicating to the portion he needed for the win because he was speaking to more people about individual rights as U.S. Citizens. Clinton was polluting and diluting her message with the World of Citizens, but the world doesn’t vote in American elections.

That is a complete and utter incrimination against the Democratic Party as far as I am concerned. To have lost the debate on civil rights is inexcusable! And furthermore, to not get it? Why, that’s just plain stupid!

Is the Democratic Party Worth Saving? added on Wednesday, March 8, 2017