“YOU HAVE TO AUTHENTICATE A DOCUMENT”

(Feb. 9, 2017) — In Part I of The Post & Email’s recent interview with Atty. Mario Apuzzo, he discussed an opinion by a three-judge panel of the Third Circuit Court of Appeals issued in response to his lawsuit alleging that Barack Hussein Obama had not proved his constitutional eligibility to serve as president and commander-in-chief.

Apuzzo, who filed Kerchner, et al v. Obama, et al, in the early hours of Inauguration Day, January 20, 2009, was not the first attorney to challenge Obama’s eligibility. In late August 2008, Atty. Philip Berg filed suit in Pennsylvania alleging that evidence showed that Obama was born in Kenya and not Hawaii, as he claimed, rendering him ineligible for the presidency.

Article II, Section 1, clause 5 of the U.S. Constitution requires that the president and commander-in-chief be a “natural born Citizen.” Because the Framers did not provide a detailed description of what they believed the term of art to mean at the time the Constitution was written, proceeding generations have debated the matter, which still lacks a definitive ruling by the U.S. Supreme Court.

While some believe that a birth on U.S. soil is sufficient to qualify as a “natural born Citizen,” others believe that the term conveys a higher standard of citizenship extending to the person’s parents. 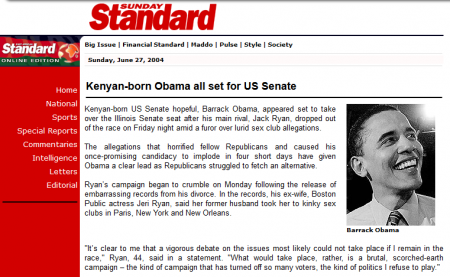 A number of articles from reputable sources, among them NPR and the Associated Press, published before Obama announced his presidential aspirations in 2007 reported that he was born in Kenya.  In December 2007, ten months after Obama made his presidential declaration, MSNBC’s Chris Matthews told his viewing audience that Obama was born in Indonesia.

Obama claims a birth in Honolulu, HI on August 4, 1961. Some articles, including at NPR, were later changed to reflect that claim without an explanation as to how an error was made in the first place.

Whether or not Obama was born in the U.S., complicating his eligibility is that his claimed father was never a U.S. citizen.

The issue of whether or not private citizens have legal “standing” to challenge the eligibility of a candidate or sitting president arose in both Berg and Kerchner, as both eventually reached the Third Circuit Court of Appeals, but there were significant differences in the way the cases were adjudicated.

In Berg, plaintiff Philip Berg was not told by the Third Circuit that his action was frivolous nor that he must submit a brief defending himself against possible court-ordered financial sanctions to make the defendants whole.  Conversely, after Apuzzo’s case reached the appellate court in 2010, Apuzzo was told that it was frivolous; the three-judge panel issued an Order to Show Cause requiring him to argue why he should not have to pay the defendants’ court costs; and a New Jersey rule was used to accuse him of an ethical violation despite the court’s omission of crucial wording by means of an ellipsis.

An ellipsis was also employed in April 2010 by the Congressional Research Service (CRS) in defending Obama’s presumed eligibility by omitting wording from Perkins v. Elg, as expounded upon by The Post & Email’s Joseph DeMaio.

Apuzzo told The Post & Email that the “frivolous” label has remained in place and that the three-judge panel sullied his professional reputation by truncating New Jersey Rule of Professional Conduct 3.3(a)(3).

“They put this tarnish on me, which is a written opinion of the Third Circuit, and I explained to them that this was totally improper and they should write a corrected opinion.  They cut off the words ‘…and not disclosed by opposing counsel,’ suggesting that I committed a violation,” Apuzzo said.

According to The New York Times, Judge Thomas M. Hardiman may still be on Trump’s list for the U.S. Supreme Court should a second vacancy occur during his presidency.

In his 95-page reply brief to the court, Apuzzo argued that the suit broke new ground in regard to determining who has standing in the matter of presidential eligibility.  “The law of standing is not an easy law,” he told The Post & Email.  “You have 5-4 decisions all the time by the U.S. Supreme Court. On this, there was no high-level decision by the Supreme Court decision, so there was nothing to guide a lawyer.  And the Berg case was totally different.

“They threw all of this at me:  that the case was frivolous, that I should have known there was no standing, and that I committed some kind of ethical violation.”

Apuzzo then asked for a hearing, after which the panel rescinded its threat of sanctions.

While in Apuzzo’s case in July 2010, Hardiman termed a citizen’s quest to discover whether or not the nation’s chief executive was eligible to hold the office frivolous, in January 2011, then-businessman and current President Donald Trump voiced just the opposite viewpoint, publicly voicing questions about Obama’s eligibility which were transmitted to living rooms across the country via the mainstream media.

Three months later, just prior to an unannounced press conference, the White House released what it said was a scan of a certified copy of Obama’s long-form birth certificate obtained from the Hawaii Department of Health.  In brief remarks, Obama told the American people that “additional information about the site of my birth” was provided by means of the image published at whitehouse.gov.

During our interview, Apuzzo said that Obama’s attorneys could have entered the birth certificate into evidence to avoid or settle aspects of litigation over his eligibility.  “On the issue of whether or not Obama was born in the United States, all they had to do was provide a birth certificate,” Apuzzo said.  “During the first case that was argued, that is all they needed to do.  It would have been collateral estoppel, which means that the issue has already been decided.”

If it’s an authenticated public record that hasn’t been altered and the court accepts it, then it’s decided.  But Obama never did that.  You can have all the images you want on a computer and all the papers existing in some office, but we’re talking about what’s on the record.  Those are two different things.

To get it on the record, you have to satisfy the Rules of Evidence.  One very fundamental rule is authentication.  The document has to be authentic. How do you authenticate it?  You can authenticate it with the custodian of the record, somebody who saw someone do something, someone who was there…It has to be the real deal.  Or it could be someone who says, “I wasn’t there, but I recognize his signature,” even an expert who can testify that “That’s his signature; I’ve compared it to other examples.”

So you have to authenticate a document. I”m not saying that Obama can’t authenticate his document; we’ve never seen anything in court.  We’ve seen only what’s on the computer.  Nobody ever came to court and testified that what’s on that computer is indeed what’s in the archives in Hawaii.

They wanted to argue that they suffered all of these legal expenses and that I have to pay for the lawyers and that sort of thing, and I wanted to argue that they should have mitigated their damages.  A plaintiff who suffers an injury has an obligation to mitigate his damages.  In a personal injury, you have to go to the doctor and see if you can be treated; maybe surgery will fix you.  In a commercial case, you can’t just sit there and suffer the injury; you have to go out and do something to help yourself.

So in this case, did they really have to incur all of their legal expenses?  All they had to do was submit the birth certificate, and that would have been the end of it…it would have avoided the 200 and some cases challenging Obama’s eligibility.

I wanted a hearing on mitigation of damages.  Why didn’t they simply file the birth certificate at the court on Day One?  That would have settled the place of birth, although as far as I’m concerned, place of birth is not sufficient.

After I submitted my 95-page response, asked for a hearing as part of my due process rights and submitted my defense regarding mitigation of damages, the court discharged the Order to Show Cause.

What they didn’t do is issue a corrected opinion given that by using ellipsis they cut out of ethics rule (N.J. Rule of Professional Conduct 3.3(a)(3)) that part of it (“and not disclosed by opposing counsel”) which clearly showed that I had not failed to cite controlling authority to the court.  I even explained to the court that they should correct their decision because it suggested that I had committed an ethical violation when I clearly had not.    See   http://www.thepostemail.com/2017/02/04/judge-on-trumps-short-list-for-u-s-supreme-court-labeled-obama-eligibility-case-frivolous/.

But when they intimated that I committed an ethical violation based on an ethics rule which the Court misquoted by use of ellipsis and opposing counsel presented the Berg case to the court and let the decision stand without making a correction and other courts are citing this opinion, that leaves a very sour taste in my mouth.

If they had cited the rule properly, there would have been no question that I did not commit an ethical violation because opposing counsel cited Berg.  And the court was aware; the Berg case was their own case.

The outcome of such a decision creates a chilling effect on lawyers bringing cases to the courts on important constitutional questions. Can we just imagine our judiciary telling lawyers, who filed civil rights lawsuits in which they argued that separate is not equal or that abortion was a personal privacy right based on the liberty clause of the Fourteenth Amendment and protected thereunder and that a fetus lacked federal constitutional protection, that their arguments were frivolous and that they were to show cause why they should not be made to pay damages for the opposing party having to defend against such arguments.

Eligibility Attorney: An Image on a Computer Screen Does not Satisfy “Rules of Evidence” added on Thursday, February 9, 2017

3 Responses to "Eligibility Attorney: An Image on a Computer Screen Does not Satisfy “Rules of Evidence”"