Obama Out? Not So Fast – Why Birthers Won’t Quit Action in Federal Court 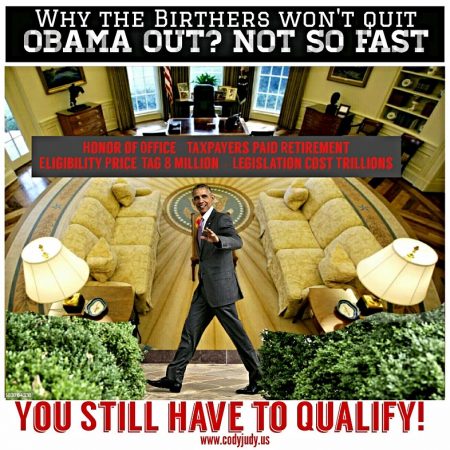 (Feb. 8, 2017) — The qualifications of the Office of the President in the U.S. Constitution, Article II, Section 1, Clause 5 have been the Obama Administrations Achilles heel for the last 8 years. From people who keep track of the Birther Score Card Obama, McCain, and Cruz have had more than 226 lawsuits filed against them just on their qualification to hold the Office of the President in the [natural born Citizen] requirement. The reason Obama continues to be such a focus is because he is the only one who occupied the Office receiving the President’s Salary, Retirement package, and Honor of the Office who is believed not to have qualified as a [natural born Citizen]- Born in the U.S. to Citizen Parents

Left unchallenged, Obama will continue his entire life receiving accolades, honor, and a Presidential Qualified retirement salary as a [Past (Qualified) President], and that leaves the Qualification Question for the Office of the President Open for challenge with Obama, and not over as some people have thought just because he was in for two terms and we have had a peaceful transition of power with Election 2016 being won by President Trump.

This is to say, if Obama as an unseated past President is found unqualified, he would lose the honor of the Title of [President] as well as the [Retirement Package] of a past President who met the qualification requirements.  Indeed, Doctor Terry Lakin lost his [military retirement package] and served time in Fort Leavenworth six months on the precipice of conscientious objector by refusing to deploy or serve under an [unqualified President Obama] who refused to show his long-form birth certificate.

An endeavor is under way by Petition to rescind the penalty and Pardon Dr. Terry Lakin that which he has suffered and is now near reaching 1,000 signatures. Why should Obama be rewarded with the honor of a [Past President Retirement Package] for what the Cold Case Posse Investigation under Sheriff Joe Arpaio has proven by two Forensics Crime Labs to be a Fabricated and inauthentic long form birth certificate?

Next the Cold Case Posse make the Case Obama’s Birth Certificate is a Fraud.
55,000 + Hits in just a few weeks!
Obama’s Last Press Conference BLOWS UP with Birth Certificate https://www.youtube.com/watch?v=BGEMHOEil5c

Obama Out? Not So Fast – Why Birthers Won’t Quit Action in Federal Court added on Wednesday, February 8, 2017