(Feb. 2, 2017) — Last week, The Post & Email received a letter dated January 18, 2017 in which an inmate at the Shelby County jail in Memphis, TN conveyed a heretofore unreported story to this publication of three “riots” plus a “peaceful” protest over a four-month period.

The Post & Email has received dozens of letters from Shelby County inmates over the past six months in regard to the county’s criminal court system and repeated reappointments of Pat Vincent and Mary Thomas as grand jury foremen.

In an initial search, The Post & Email found no mention of the incidents in the local media.  However, just prior to press time, an article at The Commercial Appeal appeared corroborating January 16 as the date of an inmate-caused “riot.”

A one-paragraph article of the incident quoting CA’s report appeared on the website of the Tennessee Bar Association (TBA).

The reasons provided for the incidents were cited as “unfair treatment,” an “overly aggressive environment,” hostility on the part of jailers and an inability for inmates to consult with attorneys on their respective cases.

As a result of what the inmate termed “riots,” he wrote that the individuals housed in the three areas where the protests occurred can no longer have visitors, communicate by telephone or shower. “Shelby County Jail has become a cesspool of built up rage on both sides,” he wrote.

On page 3, he referenced a riot at the same jail “in the mid-90s,” predicting that if current conditions do not change, something more ominous could occur.

The Post & Email located an article in the Orlando Sentinel dated August 20, 1991 which reported that “Crowding caused by housing state prisoners in a county jail was partly to blame for a weekend riot that left about $3.5 million in damage, officials said. The riot Saturday gutted the jail’s fourth floor, which houses about 540 high-risk inmates awaiting transfer to a state prison, Shelby County Sheriff A.C. Gilless said. State felons are housed in the jail to help meet a federal court order to reduce crowding. Two inmates were injured in the riot, neither seriously.”

Ten years later, Salon published an article [Warning:  If opening the link, reader discretion advised; not for children] in which the author described the Shelby County jail as “a hellhole — a penal facility so plagued by severe gang violence, unsanitary conditions, lax medical service, overcrowding and inadequate supervision that two federal judges have declared it unconstitutional. The jail, the largest in Tennessee, is the focus of more than a dozen ongoing local lawsuits and an active U.S. Department of Justice investigation. Four men have died while being held in the Shelby County Jail; the families of three of those men have filed a $15 million wrongful death suit against the man who runs the jail, Sheriff A.C. Gilless, and other authorities. Just last week, on Jan. 17, Gilless and other penal authorities were also slapped with a $22 million lawsuit by 16 Shelby County Jail guards, who claim they were severely traumatized after Gilless and others authorized a phony takeover of the jail’s control room last June.”

Salon’s 2001 report of gang activity within the Shelby County jail is mirrored by The Post & Email’s coverage of current conditions within Tennessee’s state prisons, including those privately-run by CoreCivic, formerly CCA.

In his January 18, 2017 letter, the inmate related trauma to the female correction officer allegedly taken hostage, a new $10 million computer system, and a litany of jailers and detectives “who are keeping things from the public eye.”

The inmate also blamed District Attorney General Amy Weirich, who was the subject of several ongoing ethics complaints filed with the Board of Professional Responsibility (BOPR).

For the past seven years, The Post & Email has been exposing systemic corruption within Tennessee’s judiciary, prosecutors’ offices and grand juries.

In a January 24 letter to a CoreCivic executive on the conditions in one of its prisons located in Hartsville, TN, The Post & Email suggested that Tennessee’s jails and prisons are perpetually overcrowded because of corrupt grand juries which indict citizens of their community arbitrarily and often on “contrived” evidence.

Outside of any statute appearing in Tennessee Code, Shelby County criminal court judges appoint a grand jury foreman and grand jury foreman pro tempore to work with the impaneled grand jurors who by law must be randomly selected and vetted for conflict of interest.

In Monroe County, TN, in December 2011 Walter Francis Fitzpatrick, III observed then-Criminal Court Judge Amy Reedy handpicking all of the members of what would be the following term’s grand juries.

Prior to publication of this article, The Post & Email contacted the Shelby County Sheriff’s Office‘s through its “Media Questions”  email link:

Good morning, I run an online newspaper and have recently received a letter from an inmate at the Shelby County Jail claiming that “3 riots and one peaceful protest” occurred beginning in October within the facility.

The dates cited by the inmate are:

I am told that the incident on January 16 resulted in a female correction officer being “briefly held hostage” and that “at least 10” inmates were injured and a pod “destroyed.”

As the inmate stated in his letter, I note that there is no media coverage of any of the alleged incidents. Therefore, I am investigating the allegations with you directly to obtain the other side of the story.

As of press time, we have received no response. 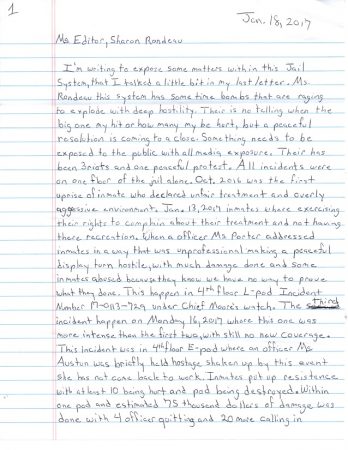 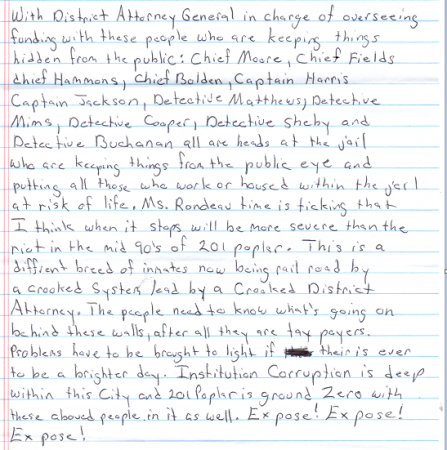 I have done several TV interviews about the jail incidents. They were not riots. The most serious disturbance involved 12 inmates who did not want to go back in their cells after lunch on the 16th of January. The corrections deputy was told to leave the pod because the inmates said they were going to wreck the pod because they wanted to go back out for more recreation time.

She left the pod. Our rapid response team came in and the inmates were sent back to their cells. After reviewing the security video 6 inmates were charged with vandalism and removed from the 4th floor pod and placed in separate confinement. Damage to the television, security cameras and one jail computer was around $7,000. No one was hurt in the disturbance.

The other incidents also were settled without injury and no damage was caused by inmates.