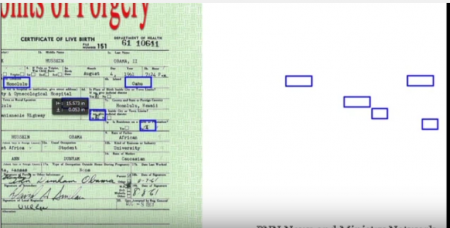 The third and final presser on December 15 revealed additional evidence to support investigators’ initial findings that the long-form birth certificate image posted at whitehouse.gov said to belong to Barack Hussein Obama is a “computer-generated forgery.”

Gallups, who produces his own videos for the PPSimmons News & Ministry Network, of which he is co-founder, titled his latest “FOX NEWS REPORTER Gets Obama Birth Certificate FRAUD Correct!”

Beginning at the 1:55 mark, Gallups included the reporter’s accurate and emotionless presentation of the facts as she heard them from Zullo as he divulged that two forensics experts conducting independent investigations concluded that the image cannot possibly be authentic.

The reporter explained that the analysts found that “President Obama’s birth certificate is fake.”

“The inflection in her voice is unbelievable. She GOT it,” Gallups told The Post & Email on Saturday.

In an interview on January 16, Zullo recounted that at the presser, “The media was standing before me with recorders.  There were reporters sitting on the floor.  There was a group of reporters I had not seen before, except for one; they were all young, and the initial reports I heard coming from the live stream were all accurate.”

The journalist featured in Gallups’s video, whose name is not known, works for a Fox affiliate, Channel 10 in Phoenix.  Gallups told The Post & Email that he “saw her face in the original lengthy clip” from the video stream of the press conference and was able to determine that she is not the same reporter shown in a Channel 10 televised broadcast airing later that evening.

Many news outlets, particularly national ones, have misreported facts, ridiculed the messengers, politicized the issue, or chosen not to report at all on the three press conferences held during the life of the investigation in which successively more evidence was presented to show that Obama’s claimed long-form birth certificate is fraudulent.

Whether or not the newly-minted Trump administration will launch an investigation into the forgery is as yet unknown.

The forgery of a government document is a federal-level felony. At the first press conference on March 1, 2012, Zullo additionally declared Obama’s purported Selective Service registration form to be fraudulent.