REQUEST MADE PRIOR TO TRUMP’S TAKING OFFICE 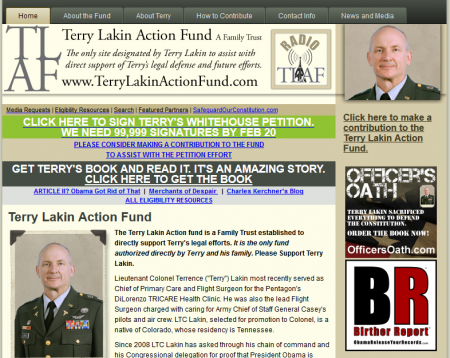 (Jan. 27, 2017) — On Friday morning, The Post & Email interviewed Terry Lakin Action Fund Trustee Marco Ciavolino as a result of renewed interest in the case of former Lt. Col. Terry Lakin, who in 2010 was sentenced to six months in Fort Leavenworth and a dishonorable discharge from the Army for requesting proof that Barack Hussein Obama was a legitimate commander-in-chief before redeploying to Afghanistan.

Coincidentally, on Saturday, citizen Gary Wilmott posted a petition at whitehouse.gov requesting that the administration and Congress grant Lakin a pardon and reinstate him in the Army with all back pay and benefits.

Unbeknownst to many, last month Ciavolino began an effort to secure a pardon for Lakin by sending a letter to one of then-President-Elect Donald Trump’s close legal advisors.

Ciavolino told us that he and Wilmott did not coordinate their efforts. However, once he became aware of Wilmott’s petition, he promoted it to a mailing list consisting of thousands of individuals who had followed Lakin’s case or contributed to his cause.

In 2008, Lakin had begun his quest for documentation of Obama’s eligibility given that Article II, Section 1, clause 5 of the U.S. Constitution requires that the president and commander-in-chief be a “natural born Citizen.”

Prior to 2008, various articles had been published stating that Obama was born in Kenya or Indonesia. At some point, Obama claimed a birth in Honolulu, HI, and a number of articles citing a foreign birthplace were altered to reflect that claim.

Birthplace alone may or may not be the only factor in determining whether or not a person is “natural born.” Both before and after Obama took office, researchers and constitutional scholars began delving into what the Founders might have intended when including the term of art in the final draft of the Constitution during the summer of 1789.

Shortly after Lakin went to prison in December 2010, then-businessman Donald Trump began publicly questioning why the White House had not released Obama’s “long-form” birth certificate containing the name of the delivery doctor, his parents’ address and respective occupations, the signature of the health director at the time, and an official registrar’s stamp, an item missing from the “short-form” Certification of Live Birth released on Obama’s behalf in 2008 of dubious origin.

Trump spoke for many Americans when he insisted that Obama prove his eligibility for the office of president.  “There is not one record, in any hospital in Hawaii, that Barack Hussein Obama was born there,” Trump said on MSNBC’S “Morning Joe” on April 7, 2011.

While Lakin was completing his sentence, the White House published an image which it said was a scan of a certified copy of Obama’s long-form birth certificate from the Hawaii Department of Health (HDOH), an event Lakin later described in detail in his book, Officer’s Oath.

Within days, however, the image was said to be a poor forgery by experts who cited multiple layers, the lack of an official stamp, and a variety of other anomalies.

Approximately four months after its release, then-Maricopa County Sheriff Joseph Arpaio commissioned his Cold Case Posse to investigate the image.  On March 1, 2012, lead investigator Mike Zullo announced at a press conference that the image is a “computer-generated forgery.”

Neither Congress, the FBI nor any mainstream media outlet launched its own investigation into the conclusions despite Arpaio’s concern voiced at a second press conference on July 17, 2012 that the forgery posed a “national security” risk.

Following a third and final press conference on December 15, 2016, then-Maricopa County Sheriff Joseph Arpaio announced that the entirety of the evidence gathered by investigators would be turned over to federal authorities and Congress.

While the mainstream media has attempted to characterize the declared forgeries as a “debunked” conspiracy theory, it has generally failed to report that during last month’s final press conference, Zullo revealed that two well-known forensics experts had examined the long-form birth certificate image and agreed, from the positions of two different disciplines, that the image cannot be authentic.

Of the media’s continued denial of the forgery conclusions, on Thursday Zullo told The Post & Email, “They can’t refute the findings, but they still want to put the propaganda out there as if it were some kind of conspiracy theory.  But the press conferences have not been debunked.”

After his discharge from the Army, Lakin opened a private medical practice in his home state of Colorado, where he continues to see patients. However, Ciavolino said that Lakin’s wish is to return to the Army and continue serving as a medical doctor there.

Wilmott, who also spoke with Lakin this week, said that Lakin expressed the same desire to him.

In a letter which The Post & Email has seen, Ciavolino wrote to Trump’s legal counsel, “We discussed Dr. Lakin’s situation a few years ago when Mr. Trump brought the issue of eligibility to the news cycle. Though Dr. Lakin was ultimately charged with Missing Movement, and subsequently stripped of rank, benefits, salary, and retirement, and sent to prison for six months, the issue he stands for is as significant today as it was eight years ago.”

Ciavolino further wrote that as a result of the conclusions of the forgery of the birth certificate image, there is “No valid legal documentation of Obama’s eligibility, or even citizenship.”

The letter asks then-President-Elect Trump, after his inauguration, to grant the following:

As of Friday, Ciavolino has not received a response from Trump’s legal advisor but promised to keep this publication updated on any developments.

Because of the renewed action on Lakin’s behalf, Ciavolino is asking for donations from the public to update the two websites maintained by the Action Fund and to further the efforts for a presidential pardon.

Contributions can be made here.

On Thursday night’s edition of “Hannity,” host Sean Hannity raised the pardon request of Christian Saucier, a U.S. Navy sailor sentenced to a year in federal prison for taking photos of the inside of the submarine on which he was stationed.  Stating that he is presently reviewing the case, Trump added that there are “several” others he is also examining.