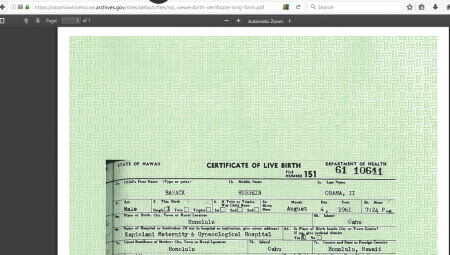 (Jan. 20, 2017) — Following the inauguration of Vice President Michael R. Pence and President Donald John Trump on Friday, the Whitehouse.gov website reflects the shift from the Obama regime to the Trump administration.

Under the “Issues” tab are reflected the new administration’s positions on energy, the military, “trade deals” and other items.

An item of interest which has been archived as of press time is the long-form birth certificate image posted on April 27, 2011 bearing the name “Barack Hussein Obama” along with the explanatory blog post to which it is linked.

On the Bill Martinez Live! radio show on Friday morning, guests Carl Gallups and Michael Zullo appeared for approximately 90 minutes to discuss the five-year investigation led by Zullo at the request of former Maricopa County Sheriff Joseph Arpaio into the birth certificate image which some experts had reported to be a forgery.

Gallups expressed optimism that the Trump administration and Congress might be willing to look into the “earth-shattering” evidence Zullo amassed over the course of the investigation showing that the image is a “computer-generated forgery.”

On December 15, Zullo detailed in a press conference how two forensic analysis experts had found that the “nine points of forgery” matching a long-form birth certificate from an individual born in Hawaii the same month as Obama purportedly was affirmed Zullo’s initial findings that the Obama birth certificate image cannot be authentic.

Approximately six years ago, as Trump considered challenging Obama for the presidency in 2012, Trump openly called for Obama to release his detailed birth record to confirm Obama’s claim of a birth in Honolulu, Hawaii on August 4, 1961, and, more specifically, that he met the U.S. Constitution’s requirement for the president as a “natural born Citizen.”

After several months of pressure from Trump and those who supported him, the White House released what it said was a scan of a certified copy of Obama’s original birth record obtained from the Hawaii Department of Health (HDOH). Trump proudly took credit for the release of the image and said that he would have people with whom he was acquainted examine it for its authenticity or lack thereof.

Several months later in August 2011, 242 constituents of Arpaio’s approached him with concerns stemming from several independent experts’ determinations that the image was a forgery and requested an investigation. Arpaio assented, at which point then-Cold Case Posse leader Mike Zullo became the project’s lead investigator.

Arpaio oversaw the probe until he left office on January 1, succeeded by Paul Penzone.

On Thursday, Arizona media reported that at Penzone’s first press conference detailing his plans for his first 100 days in office, he announced that the Cold Case Posse would be shuttered, although most, if not all of its members had already resigned.

Penzone had indicated in 2012 when he first challenged Arpaio that he believed the investigation to be a waste of time.

On Friday morning, Gallups raised the specter of an illegitimate president having occupied the White House and made the nation’s decisions for the last eight years with a fully-complicit media, Congress, and administration.

While noting that Arpaio was in Washington, DC for the inaugural festivities, Zullo said that neither he nor Arpaio has any intentions of ceasing their efforts to convince federal authorities, which could include Congress, to examine the evidence they gathered over the course of the investigation.

Zullo observed that when Sen. John McCain sought the presidency in 2008 against Obama, the U.S. Senate issued Senate Resolution 511 affirming that McCain met the “natural born Citizen” requirement despite his birth in the Panama Canal Zone to US-citizen parents, one of whom was an admiral in the Navy at the time. Zullo reasoned that the Congress is aware that a person’s birthplace is a key factor in whether or not he is recognized as a “natural born Citizen.”  The creation of a birth certificate forgery, Zullo said, could have been motivated by the need to show that that criterion had been met in Obama’s case if he were, in fact, born outside of the country.