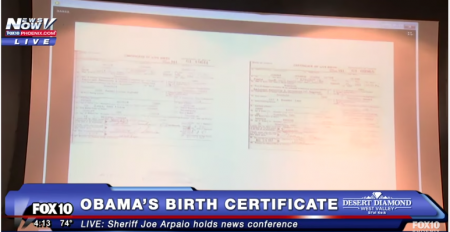 (Dec. 17, 2016) – In an interview prior to the final Maricopa County Cold Case Posse press conference on December 15, WheresObamasBirthCertificate.com (WOBC) founder Mike Volin told The Post & Email that he will be releasing an information package for concerned citizens to present to their congressmen once Donald J. Trump, followed by his attorney general and other key cabinet members, are  sworn in.

At the request of Maricopa County Sheriff Joseph Arpaio, between September 2011 and December 15, 2016, the Cold Case Posse conducted an investigation into the authenticity or lack thereof of the long-form birth certificate image posted at whitehouse.gov in April 2011 purported to be a PDF of a certified copy of Obama’s original birth record from the state of Hawaii.

On March 1, 2012, Cold Case Posse lead investigator Mike Zullo and Arpaio held the first of what would ultimately be three press conferences in which they declared the long-form birth certificate image a “computer-generated forgery.”

At a second presser on July 17, 2012, Zullo and Arpaio declared that the standard of probable cause in the forgery of the image was surpassed, calling upon Congress to launch its own investigation.  However, Congress remained silent, and the media, rather than showing curiosity and launching its own probes, scorned and ridiculed the messengers.

On December 15, 2016, the final presser revealed what the investigation found to likely be the “source document” for the Obama long-form image, a birth certificate belonging to Johanna Ah’Nee, born on August 24, 1961.

Also revealed was that two independent document examiners found that nine items from the Ah’Nee birth certificate appear to have been lifted and placed in exactly the same respective positions on the Obama document, a phenomenon which one of the experts said “does not happen” in an authentic document.

As in 2013 with video from a presentation Zullo gave in May of that year to the Constitutional Sheriffs and Peace Officers Assocation (CSPOA), Volin will be producing DVDs as well as a download available on his website which concerned citizens can disseminate to their congressmen to urge an investigation of the posse’s revelations.

Arpaio concluded Thursday’s press conference by stating that the results of the investigation will be delivered to “federal authorities” and Congress by the end of the year.  Arpaio leaves office on January 1 once his successor, Paul Penzone, is sworn in.

At the March 1, 2012 press conference, the posse additionally revealed that it had found Obama’s Selective Service registration form to be a forgery, after which the Selective Service System refused Arpaio and Zullo access to an original or certified copy for purposes of the ongoing investigation.

It is a violation of federal law for any man to hold a federal office without having timely registered with the Selective Service.

The constitutional requirements for the president found in Article II, Section 1, clause 5 of the U.S. Constitution are that he or she must be a “natural born Citizen,” at least 35 years old, and have resided in the country for 14 years.

Volin told The Post & Email that once the final press conference was held, he will be hosting an edition of his radio show to discuss his renewed endeavor to convince Congress to investigate why the only proffered documentation bearing Obama’s name between 2008 and 2016 was found to be fraudulent.

Volin recommends that constituents arrange for face-to-face meetings with their congressmen or available staffers, as they did between 2013 and 2015 to present his earlier “Sheriff’s Kit.”

“People can start getting ready,” Volin said.  “We’re going to hold them accountable.”