BUT HAVE CRIMES BEEN COMMITTED? 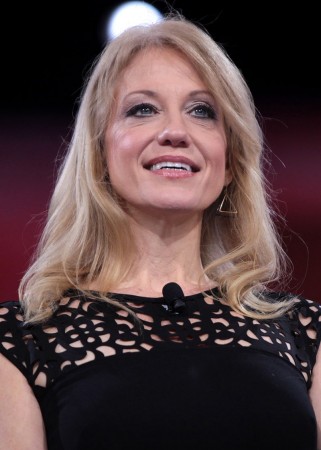 (Nov. 22, 2016) — On Twitter and through other outlets on Tuesday morning, a video of an NBC News interview of former Trump campaign manager Kellyanne Conway stating that president-elect Donald Trump “does not wish” to prosecute his former rival, Hillary Clinton, for her use of a private email server while she was Secretary of State quickly became a leading story.

Conway was a guest on “Morning Joe” when she said that Trump may be able to “help her heal,” meaning Clinton, as opposed to prosecuting her after Trump takes office on January 20, 2017.

Conway has been offered a key advisory role in the Trump administration.

At many of Trump’s campaign rallies, his supporters chanted enthusiastically of Clinton, “Lock her up!” During the second presidential debate on October 9, Trump had promised, “If I win, I am going to instruct my attorney general to get a special prosecutor to look into your situation.”

Responding to Trump’s pledge, Conway said that “It wouldn’t be up to him whether or not she goes to jail. That would have to be fully adjudicated through the regular channels like it would be for anyone else.”

On July 5, FBI Director James Comey had announced his decision not to refer the evidence his agents had gathered over their year-long investigation into Clinton’s email server to a grand jury or to the Justice Department for further action.  However, at the same time, Comey enumerated a long list of transgressions, including Clinton and her aides’ mishandling of classified information as “extremely careless.”

During testimony to members of Congress later that week, Comey contradicted many of the responses Clinton was said to have made during her private interview on July 2.

In his first interview post-election on Sunday, Trump told ABC’s Lesley Stahl that his “focus” was on issues other than Clinton and that he would “think about” whether or not to follow through on his promise to appoint a special prosecutor.  He also characterized the Clintons as “good people,” in sharp contrast to the “Crooked Hillary” mantra he had used once Clinton became the Democrat presidential nominee.

The Clinton Foundation remains under FBI investigation to the public’s knowledge and has recently seen a sharp drop in donations.

Conway appeared to echo Trump’s statements to Stahl when she said on Tuesday that issues emanating from the campaign “aren’t among” those Trump is now considering as he assembles his cabinet nominees.

On October 23, Conway told NBC’s Chuck Todd that the Trump campaign “was behind” in polling and electoral votes, while other Trump surrogates had said in August that “The campaign is on its way to victory.”

Virtually all of the polls conducted by mainstream media outlets were incorrect as they predicted for months that Clinton held a significant lead over Trump.  In Conway’s interview with Todd, she did not dispute the network’s lead-in report that Clinton led Trump by “double digits.”

There remain rampant speculation and anecdotal commentary that the Clintons could be implicated in wrongdoing not yet reported in the mainstream media.

The private groups Judicial Watch and Freedom Watch, both founded by former federal prosecutor Larry Klayman, continue to press forward on matters involving the Clintons, including, respectively, the Foundation‘s alleged “pay-to-play” operation and the terrorist attack in Benghazi, Libya on September 11, 2012 which killed four Americans.

Prior to 1946, county, state and federal grand juries played a much larger role in investigating public officials suspected of wrongdoing.  Today, grand juries are called upon by government prosecutors to examine evidence against an accused, but the grand jury itself rarely initiates its own investigations as it once did.

Of Conway’s statements made on Tuesday, LCDR Walter Francis Fitzpatrick, III (Ret), who was sent to state prison in Tennessee for more than two years for attempting to approach his local grand jury with information about government corruption, responded:

No matter if true, the grand jury remains as the most powerful law enforcement agency we know in our republican form of governance. More powerful even than the president.

A federal grand jury, acting on its own authority, can take up issues of corruption respecting any official. It’s a target rich environment.