“THE SYSTEM IS COMPLETELY BROKEN” 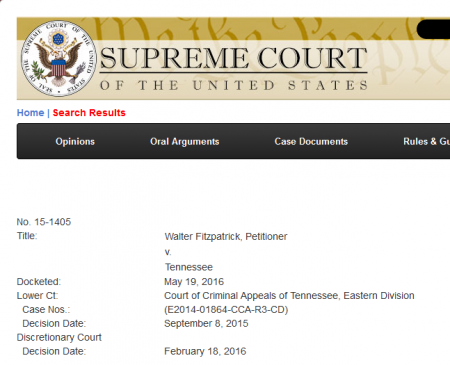 (Oct. 31, 2016) — On October 3, the U.S. Supreme Court denied a review to a petition for a Writ of Certiorari filed by Atty. Van R. Irion, representing petitioner Walter Francis Fitzpatrick, III in a case rejected by the Tennessee Supreme Court.

The petition was filed on May 19 and distributed for conference on September 26, with the negative ruling issued on October 3.  No reason for the denial was provided.

The respondent to Irion’s petition, the State of Tennessee, waived its right to respond on May 23.

Petition for Writ of Cert 3.4

On February 18, the Tennessee Supreme Court declined to hear an appeal to Fitzpatrick’s convictions of felony “extortion” and “aggravated perjury” stemming from his numerous attempts to bring what he believed was clear evidence of local government corruption to the McMinn County grand jury for its review.

On March 18, 2014, Fitzpatrick was himself indicted and arrested while awaiting a decision from the McMinn County grand jury as to whether or not it would hear his arguments.  Tennessee law requires that a citizen petitioning to address the grand jury swear under penalty of perjury that the evidence he plans to present is accurate to the best of his knowledge.

A trial ensued at the end of June of that year, after which the jury found Fitzpatrick “guilty” of the aggravated perjury and extortion charges.  A stalking charge had been dismissed by the judge and Fitzpatrick was acquitted on a misdemeanor count of harassment.

On page 4 of his brief, Irion contended that a circuit-court conflict compelled the Supreme Court to review the case.  “…the Order of the Tennessee Supreme Court conflicts with Federal precedent on a matter of Federal Constitutional application, highlighting an ongoing Circuit Split,” he wrote.

Irion’s second reason for the high court to provide a review was “to secure settlement of an important question of public interest.”

The Fifth Amendment provides for a grand jury review of evidence involving an “infamous crime” prior to the government’s formal charging of the a citizen.

When on Monday The Post & Email asked Irion for a response to the ruling, he said, “I’m disappointed, but not surprised. The system is completely broken.”