WHO KNOWS HOW TO PROTECT WOMEN BETTER – WOMEN OR MEN? 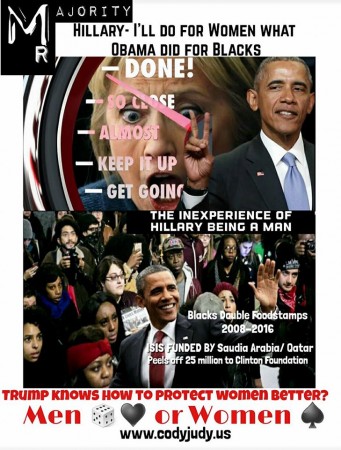 (Oct. 26, 2016) — Accommodating the new Amendment passed by Congress  Obama is set to retire in the county helped the least during his tenure at the White House – right smack dab in Cook County, South Side of Chicago, Illinois – Harrison District, to be exact, where there are 6,000 illegally-handled guns that have been seized and just as many homicides in two years. Actually Congress has passed no Amendment stating such should happen; however, it does beg the question that if such were the case, how might politicians act while in office and what might they do? While politicians are quick to whip out their six-shooter and blast “gun-violence,” the autonomy of guns is clear, and the following statement actually coherent:

[Chicago police Superintendent Eddie Johnson said Tuesday his department is doing all it can to combat violence rooted in poverty and hopelessness.“It’s not a police issue, it’s a society issue,” Johnson told reporters outside police headquarters. “Impoverished neighborhoods, people without hope do these kinds of things. You show me a man that doesn’t have hope, I’ll show you one that’s willing to pick up a gun and do anything with it. Those are the issues that’s driving this violence.”]
This leads us right back to the deportation of jobs and with it “Hope & Change,” and the incredible anti-American, anti-Constitutional, anti-American jobs butcher which blacks actually overwhelmingly voted for in 2008 and 2012: Barack Obama. You really have to stretch your imagination to say Obama has helped blacks by saying, as Al Sharpton did, that Obama never passed anything that hurt blacks. What about that “Helped Blacks”? If you count an exploding Food Stamp Crisis and a mandatory penalty for not purchasing health care coverage, you might be on to something.
The reality is if you are requiring Food Stamps your wages are not bringing in enough, because your job or lack thereof is affecting you adversely. As Obama has been on a foreign-nation job-building binge, you understand how NAFTA and TPP are going to work to help foreigners much more than the inner city dependency. And those Fat-Cats in both parties applying and employing the foreign trade labor force for higher profits by not having to pay unemployment wages and a good American wage want more of the same with Hillary.
They said [natural born Citizen] i.e., born in the U.S. to Citizen Parents, didn’t matter to you and it didn’t matter to Obama, either, with his “American-loyalty Factor” checked – well – apparently it didn’t to blacks either, because they got what they wanted, and maybe even what they as a majority voted for. Obama sold every American for what now is a 20 Trillion Dollar National Debt – 10 Trillion on his watch. You really can’t say Obama wasn’t financed well, because he’s been the best and most well-financed de facto President in U.S. history, which makes his failure even more stunning and absolute.

You really gotta start to wonder if you were in the seat of God in Heaven, how in the world the United States people don’t get the message, don’t you? $10 Trillion! That’s $70K per person and 6,000 homicides in Chicago, where the devil is let loose among a people who voted for that Hope & Change. If ever prayer was needed, it is needed here in America the most now, because prayer is the supplication of a change in spirit and hope and the seed which leads to a desire for the fruit of change.

If Hillary Clinton wins the 2016 election, we might surmise “Women” will be in for just as big of a lesson of a lifetime, but I do not think that she will make it two terms. Women will get the message far faster than those who were black who voted for Obama based on the Hitleristic chromosomial-featured flawed principal decision-making process.

It’s just unreal that American women and American blacks are falling for it, but this is the nature of divisional politics and we are watching it played out.

Hillary -I’ll do for Women What Obama did for Blacks added on Wednesday, October 26, 2016