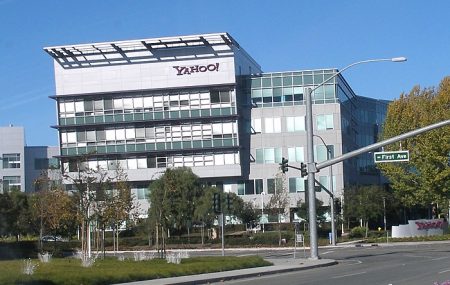 (Sep. 6, 2016) — As of 2:45 PM EDT on Tuesday, the main page of Yahoo! News contained a number of article titles about the two 2016 presidential candidates, Hillary Clinton and Donald Trump.

A vertical scanning of the content from top to bottom revealed the lead story of Greta Van Susteren’s departure from Fox News effective today in the revolving window.

Other stories followed with titles including:

“Dallas Morning News:  Donald Trump ‘does not deserve your vote'” written by the DMN Editorial Board

“Donald Trump is trying Ted Cruz’s nickname on Hillary Clinton” at Business Insider, with an inset story titled, “A newspaper that hasn’t endorsed a Democrat for president in 7 decades shreds Trump as ‘not qualified'”.

In an obvious pitch for Clinton, The Washington Post’s article titled “Yes, the race is tightening. But it’s still too soon to panic. Here’s why” begins:

A batch of new polls suggests the race is tightening, which means the “Trump can really win” dirge is at full blast this morning. We’ll get to the details in a moment. But first, here are a few simple ways to keep yourself from losing your mind in the race’s home stretch, which we have officially entered, now that Labor Day is behind us:

Stick to the polling averages. Surprising poll results can either be outliers, or can reflect statistical noise or short term fluctuations. Fortunately, we have a remedy for this: The polling averages, which have massive samples that cover longer periods of time and help screen out the noise. Depending on who is doing the averaging, Clinton is up by three (The Upshot), four (Real Clear Politics), or five (Huffpollster). As the Huffpollster team puts it: “Not a single poll included in HuffPost’s average has had Trump ahead since late July.   Historical precedent suggests that bodes well for her.

A sidebar opinion article to that reads, “Trump’s history of corruption is mind-boggling. So why is Clinton supposedly the corrupt one?”

Another opinion piece in the same section by Harvard University “political theorist” Danielle Allen titled “The FBI memo on Hillary Clinton’s emails is a must-read” contends that:

The 58-page FBI memo on Hillary Clinton’s email usage as secretary of state is a gripping must-read not only for every American historian and scholar of Internet communications technology but also for fans of novelist David Foster Wallace and, of course, every American voter.

Bottom line: Clinton’s mistake was, as she has said, to have decided to use a private server. There’s not much duplicity, deceit or intention to evade to be found in this memo. What the document does reveal is Clinton’s colossal failure to understand the monumental responsibility she took on with her choice; namely, the direct duty to archive public records.

Many believe Clinton violated federal law by sending classified information over an unsecured, private email server set up in her basement reportedly at taxpayer expense.

In yet another opinion headline, “Good news: Greta Van Susteren out at Fox News” appears in the same sidebar.

Under the “Politics” headline at Yahoo! first appears an article by The Huffington Post titled “Trump Living Large On Donors’ Dime” followed by a reprise of the Dallas Morning News article stating that Trump “doesn’t deserve your vote” published at The Hill.

Below that are four articles presented horizontally, the middle two of which are titled “Was Trump’s foundation donation to Florida AG inappropriate?” and “Conspiracy Theorists Lose It Over Hillary Clinton Coughing” showing Alex Jones commenting on his radio show that “All the time she walks out and looks all bedraggled” along with one or both of Clinton’s coughing fits during campaign comments on Monday.

In a refreshing of the revolving window at the top at approximately 3:15 p.m. EDT, the lead story is “Parents Coming up Short Paying for College,” below which appear two articles titled:

NBC News is facing harsh criticism from Hillary Clinton‘s campaign and her supporters for publishing an article on a coughing fit the Democratic presidential nominee experienced on Monday in Cleveland.

The five-paragraph story, “Hillary Clinton Fights Back Coughing Attack,” noted that Clinton quickly turned the coughing issue into a dig at her GOP rival, Donald Trump.

An article at ZeroHedge reports that “MSNBC Cuts Live Coverage As Hillary Has ‘One Of The Worst Coughing Fits Ever’ – Blames ‘Seasonal Allergies.'”

One of the headlines farther down the earlier lineup  was titled, “Is Melania Trump an illegal immigrant?”

Beginning in 2007 after Barack Hussein Obama declared his presidential candidacy, the media failed to investigate his background, including his claimed birth in Hawaii on August 4, 1961. A criminal investigation launched by the Maricopa County Cold Case Posse in September 2011 which remains ongoing found after six months of probing that the long-form birth certificate image published on the White House website is a “computer-generated forgery.”

In his editorial on Melania, Capitol Hill Blue Doug Thompson wrote, “Bombastic billionaire Donald Trump owes much of his nomination as Republican presidential candidate to his inflammatory rhetoric against illegal immigrants.  Yet he may be married to one.,” citing alleged inconsistencies in Melania’s visa applications and acquisition of U.S. citizenship.

“Her path to citizenship, however, is as muddled as most of everything that surrounds her flamboyant husband, the man of many lies, exaggerations and unproven claims,” Thompson contended.

He went on to remind his readers that Donald Trump “pledged his wife would hold a news conference clarifying just how she managed to get a green card and obtain citizenship.  As with so many broken promises by the Republican nominee for President, that press conference did not happen.”

His claim is accurate, with CNN quoting Trump as having said on August 9 that a press conference would be held to elucidate the pubic on the matter “over the next couple of weeks.”

Mrs. Trump has been caught in other lies.  She claimed, from the stage of the Republican National Convention this summer that she had graduated college in Slovenia.  No college there has any record of any degree earned by her.

No documentary proof was offered to support the claim.

While Obama claims to have graduated from Columbia University in 1983, citizen investigators and anecdotal interviews have revealed that there appears to be no tangible evidence — in photos, yearbooks, having been mentioned in media articles of the time, etc. — to show that he attended the school.  Conversely, The Post & Email has found articles within Columbia’s archives confirming that Obama’s former Attorney General, Eric Holder, was a student there in the late 1960s and early 1970s.

A number of articles written before Obama won his U.S. Senate seat in 2004 state that he is “Kenyan-born,” while some written later claim that he is a native of Indonesia.  In 1991, Obama’s former literary agent produced a biographical sketch stating that he was “born in Kenya and raised in Indonesia and Hawaii,” a statement later described by one of the former agents as a “fact checking error.”

No hospital in Hawaii or anywhere in the world has claimed Obama’s birth. On April 27, 2011 an image purported to be a scan of a certified copy of Obama’s “long-form” birth certificate from the Hawaii Department of Health was posted on the White House website. Almost immediately, however, experts went on the record to say that the image was a poorly-created forgery.

In September of that year, Maricopa County, AZ Sheriff Joseph Arpaio commissioned his Cold Case Posse to investigate the origins of the long-form image. Six months later, in a formal press conference, CCP lead investigator Mike Zullo and Arpaio announced that there was probable cause to believe that both Obama’s long-form birth certificate and his Selective Service registration form are fraudulent.

A “short-form” Certification of Live Birth bearing Obama’s name posted on several websites beginning on June 12, 2008 was immediately found to be fraudulent by several professionals and has appeared in three different color schemes, including at the White House website the same day the long-form image was released to the public.

The mainstream media reported the posse’s stated conclusions online but not on television.  Congress refused to launch its own investigation into who created and uploaded the forged image “with the intent to deceive.”

Obama has proffered no paper documentation as to his birthplace.  His birth and life narratives have shifted depending on who was relating his story, and arguably “muddled.”  The media, however, has attempted to discredit questions about Obama’s background which remain unresolved.

Obama has been said by the former governor of New Mexico to be “an immigrant,” raising questions about his citizenship status deemed by Arpaio to be a “national security” concern.

Whether or not he is “an illegal alien” has never been investigated by the media.