“WHAT IS GOING ON INSIDE THAT JAIL NEEDS TO STOP”

(Jul. 19, 2016) — On July 7, The Post & Email received a letter from a Tennessee state prison inmate detailing allegations of inmate abuse at the Hawkins County jail in Rogersville, TN.

As we had not previously reported on that particular county, before publishing the inmate’s letter, this writer contacted the Hawkins County Sheriff’s Department, requesting to speak with the sheriff’s media representative. We were told that she was away from her desk and left a voice message identifying herself and her publication while raising the questions the inmate’s letter presented.

We then published an article with the inmate’s allegations, stating that if we received a response from the media contact, Stacy Webb, it would be updated.  To date, we have received no response.

Beginning in 2010, The Post & Email began receiving eyewitness accounts of prisoner mistreatment, unsanitary and substandard conditions within the Monroe County, TN jail.  Other forms of abuse in the state of Tennessee include grand juries with judicially hand-picked foremen, accepted prosecutorial misconduct and systemic corruption within the judicial branch of government.

For the last six months, the Tennessee Department of Correction (TDOC) has been unresponsive to The Post & Email’s reports of corruption, injury, physical abuse, dangerous conditions a prisoners-for-profit operation and an alleged lack of medical care within various state prison facilities.

Medical treatment for inmates is also very difficult to obtain.  Tennessee mainstream media has reported that Hepatitis C is a serious problem within the state’s prisons and that only a small percentage of inmates are tested.

On Tuesday, The Post & Email received a second report from the same inmate.  “…what is going on inside that jail needs to stop + it needs to have it’s [sic] state funds stopped also,” he wrote on page 1.  At the bottom of page 1 to page 2, he wrote, “Thank you so much for listen to what us inmates have to say, cause people just don’t listen to what we’ve got to say anymore cause we are locked up.”

Portions of his letter are reproduced below. 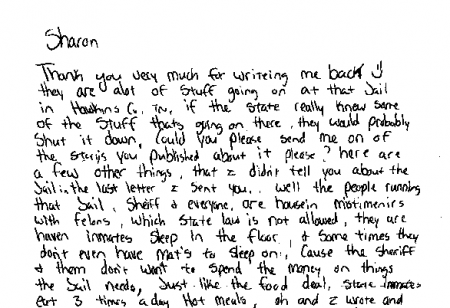 Should the Hawkins County, TN Jail be Shut Down? added on Tuesday, July 19, 2016