“WE WILL MOVE FORWARD TOWARD MAKING AMERICA SAFE AGAIN” 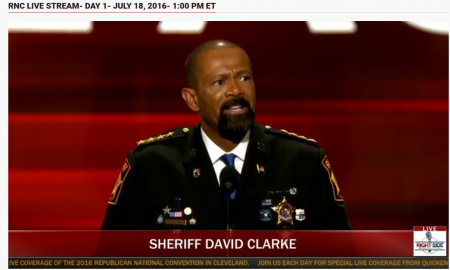 (Jul. 18, 2016) — At approximately 9:24 p.m. EDT, Milwaukee County, WI Sheriff David A. Clarke took to the podium at the Republican National Convention (RNC) to speak about increasing safety concerns of Americans with what appears to be a growing lawlessness in the country.

Clarke celebrated that a fifth officer accused in Baltimore in the death of Freddie Gray was “acquitted of all charges” on Monday but mourned the loss of five police officers in Dallas on July 7 and three more in Baton Rouge on Sunday.

Clarke praised presumptive Republican presidential nominee Donald Trump as someone who values law enforcement officers and “understands that what can make our nation safe again is a recommitment to a system of justice…” which is meant to treat all people equally.

Live streaming of the convention is being provided by RightSide Broadcasting Network.