WILL IT BE TRUMP OR SOMEONE ELSE? 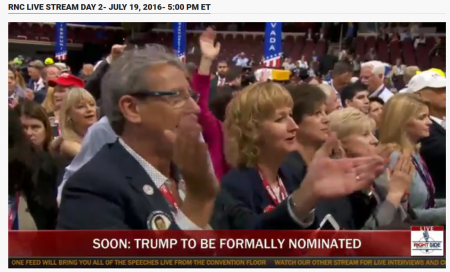 (Jul. 19, 2016) — 5:42 p.m. EDT – RNC Chairman Reince Preibus has called the convention to order and announced a color guard from the Cleveland Police Department.  Live streaming is being provided by RightSide Broadcasting Network and Breitbart News.

There were six men, four of whom carried flags, one of which was the American flag.

The Pledge of Allegiance was then led by a group of foreign “ambassadors.”

The roll call vote will formally produce the Republican presidential nominee for 2016.

At 5:55, Alabama Sen. Jeff Sessions spoke and promoted Donald Trump to be the nominee, stating that Trump “loves his country” and his family.

At 5:58 p.m., Speaker of the U.S. House of Representatives Paul Ryan took to the podium to introduce the next speaker, Rep. Chris Cox.