(Jun. 19, 2016) — In a letter received on Friday dated June 13, 2016, a Tennessee prison inmate recently relocated to the Trousdale Turner Correctional Center (TTCC) in Hartsville reported that an inmate who requested protective custody (PC) was told by prison staff, “You have to wait until Monday.”

A similar report was made last week by the girlfriend of an inmate who reportedly feared for his life in the dangerously-understaffed, privately-run prison.

The Post & Email is certain that the inmate in each case is different.

TTCC opened in January with a severe shortage of correction officers and other personnel necessary to operate a facility containing more than 2,600 beds.  Although owned by Corrections Corporation of America (CCA), The Post & Email has been told that the Tennessee Department of Correction (TDOC) made the decision to relocate large numbers of inmates to the facility with the intention of filling it to capacity.

Late last month, after obtaining documents through an open records request, the Associated Press reported that an internal memo generated by TDOC Correctional Administrator Tony Howerton noted a number of problems within the facility including excessive use of force against an inmate by staff, incorrect counting of inmates, and unwarranted solitary confinement.

Inexplicably, the AP removed its story from the web approximately three weeks later. The news organization has not responded to The Post & Email’s inquiry as to the reason for its removal.

The article is still available through several media outlets which reproduced it at the time.

A CCA-generated memo dated May 26 indicated that the facility was placed in lockdown status until further notice.

And in the letter received on Friday, the inmate wrote, “Why don’t they understand Monday might be too late?!” He continued:

So to be able to feel safe, he got a write up for Defiance, so he could go to the hole.  He is safe for now. But what about next week? Now he has a disciplinary that will invariably look bad to the Parole board this September. Now he will be in prison longer. He is a non-violent property offender. It doesn’t make sense.

The “hole” refers to a primitive, solitary-confinement cell where an inmate is placed for disciplinary purposes. While in the “hole,” the inmate is deprived of his normal privileges and often receives no medical care even if urgently warranted.

Neither the TDOC nor CCA has been willing to provide comment to The Post & Email on the volatile situation at TTCC.

The inmate reported that in the CCA-operated facility in Whiteville, TN from which he came, he also feared imminent harm from another prisoner.  “While I was at the Whiteville Correctional Facility, I requested Protective Custody. My request was denied, as it was not deemed ‘credible.’  The very next day, I was assaulted by another inmate. I was again placed in General Population. I was assaulted again by an unknown gang member,” he wrote.

Whiteville is also owned and operated by CCA. According to Tennessee law, only one privately-run prison is permitted within the state, although there are currently four CCA facilities in Tennessee, and CCA’s national headquarters is located in Nashville.

Recently in April, I was placed in a pod with the assailant. I was again assaulted with a black eye. Administration knew of the serious risk, yet ignored it.

This is a common occurrence. Many inmates are subjected to disciplinary action and the hole time for requesting protective custody. 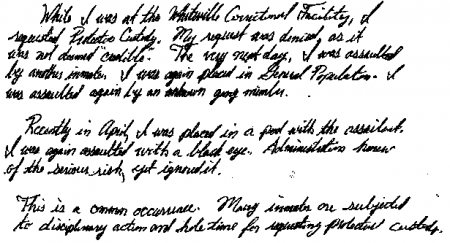 Although newly-designated TDOC Commissioner Tony Parker said, as a result of Howerton’s March report, that TTC see would stop accepting new inmates, he was quoted by the AP as also having said that the facility is “fully staffed.”

Effective Monday, Parker replaces Commissioner Derrick Schofield, whose policies instituted over a five-year. Were said by some to have increased, rather than reduced, prison violence. Gang activity and the smuggling-in of forbidden items, known as “contraband,” have been widely reported to this publication.

Prior to the publication of the AP report, the wife of an inmate who has spent time at three CCA prisons told us, “The private prisons have to go.”

Report: Inmate Requesting Protective Custody Told, “You Have to Wait Until Monday” added on Sunday, June 19, 2016

One Response to "Report: Inmate Requesting Protective Custody Told, “You Have to Wait Until Monday”"