“PREPARE AND PROTECT YOURSELF” 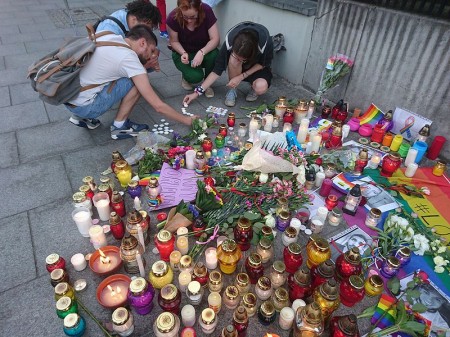 (Jun. 14, 2016) — As usual, the fiction narrative that Obama, Hillary and their leftist media throw out after any huge mass murder event is the same. Radical Islam is never the culprit. Assault weapons and other guns are, along with Islamophobia and Christian hate.

DHS is already insisting on more gun control. Hillary screeched that we must get ‘guns of war’ off the streets. Included on the cause list of all these shootings are the bigoted mouths of Christians who create the environment of hate, causing Muslims to lash out. Now it is so clear to me as to why radical Muslims round up women and children and burn them alive in cages while others rape, torture and behead others. We, the Christians who notice and hate their murderous behavior, cause it all by not wanting more of these people in our country or speaking our concerns out loud.

Now we have an ACLU lawyer who has lashed out blaming Christians for the Orlando shooting. The evil bigoted Christians and their ‘Islamophobia’ — hate is the real problem, not the radical psycho Islamic killer who was following the call to murderous jihad.

Islam never has a thing to do with inspiring and teaching radical Muslims to lash out and kill the infidels. The last few days, Obama has slithered his pathetic and defensive speech defending that he won’t blame or even mention ‘radical Islam’ when seeing over and over with every attack we face these days the killer’s attachment to ISIS, Al Qaeda or other radical Muslim groups. It is all about domestic violence and ‘hate.’

So many of these Islamic murderers, from Ft. Hood to the San Bernardino massacre and now to the Orlando club slaughter, were known Islamic radicals all on FBI watch lists and known for their connections with Muslim terrorist groups. As it stands now, we have a President and wanna-be president Hillary who won’t mention Islamic radicalism in relation to the Orlando killer. Hillary only referred to radical Islam in a brief and fractured way in response to tons of Trump and media pressure and criticism. That lasted about three minutes.

We have a President who has often said that ISIS or Al Qaeda isn’t even Muslim. Any Muslim groups who round up and murder folks aren’t Muslim. Just a small problem with pretending all these murderous killers aren’t Muslim. They are all boldly devoted followers to the teachings of Muhammad and are following the call in the Koran to violent jihad and murdering the infidels. They are fundamentalist-devout followers, not radicals.

Here is some more ‘environment’ from Dr. Laurie Roth for Obama, the ACLU and Hillary

We are in a state of national denial and a very real and growing emergency with radical Islamic sleeper cells and many ISIS members ready to strike. Our own FBI told us they were in all 50 states and that there are nearly 1000 investigations of suspected dangerous Islamics in this country. They have been and are planning more attacks on all kinds of targeted infidels…gays dancing, people at work parties, runners at marathons, soldiers in cafeterias and anywhere groups of” infidels” hang out.

Most Americans and Christians I know don’t hate Muslims or wish harm upon any group. However, most of us notice the growing threat at the hands of radical Muslims, and if ‘Islamaphobia’ is the condition of noticing the torture and endless murder by these people and not liking it at all, then count me as a hater and Islamophobic. I hate evil and murder at the hands of Islamic radicals and I have anxiety when I see a group of Islamics walking onto a plane playing with their cell phones. I guess I am an Islamaphobic, hater, Infidel, bitter clinger who apparently causes mass murder in gay clubs now just by breathing.

These really are very dangerous times and we have a President and related officials who are in total denial and blaming all the wrong people and wrong religion for these endless acts of murder. It is time for us all to get our concealed weapons permit and start carrying a gun with us to events where there are groups of people who can easily be targeted by radical Islamics. More is coming. Prepare and protect yourself.

It’s the Guns – It’s the Christians – It’s the Hate – Killings Have Nothing to do with Radical Islam added on Tuesday, June 14, 2016