(May 6, 2016) — On April 19, The Post & Email published an exclusive article containing images of a birth and death certificate, respectively, for a child born to Sen. Ted Cruz’s mother, Eleanor, while she was residing in the UK in the mid-1960s.

The images originated from documents obtained from archives accessed by a professional British researcher who was hired by a U.S. researcher, “Jim Redding.”

The Post & Email has since received the paper documents from which the images originated.

Mike Zullo, who has led a four-year investigation into the long-form birth certificate and Selective Service registration form of Barack Hussein Obama, was also made aware of the documents located by the British researcher prior to our publication of the article. Zullo has been researching Ted Cruz’s background as a private individual, without any connection to the Maricopa County, AZ Cold Case Posse‘s investigation of Obama’s records, and has discussed the documents on four broadcasts of “Freedom Friday” hosted by Carl Gallups.

Ted Cruz suspended his presidential campaign on Tuesday evening following a weaker-than-expected showing in the Indiana primary which provided rival Donald Trump with enough delegates to become the presumptive Republican presidential nominee and no mathematical path for Cruz to overtake him.

Cruz was born in Calgary, Alberta, Canada on December 22, 1970 to a presumed U.S.-citizen mother and Cuban-citizen father, Rafael Bienvenido Cruz.  On August 18, 2013, The Dallas Morning News published Ted Cruz’s Canadian birth certificate under the headline, “Dual citizenship may pose problem if Ted Cruz seeks presidency.”  The url of the article is different and appears as “http://www.dallasnews.com/news/politics/headlines/20130818-ted-cruz-born-a-citizen-of-canada-under-the-countrys-immigration-rules.ece.”

Since announcing his candidacy on March 23, 2015, Cruz has released no documentation connecting him to U.S. citizenship although claiming to have possessed it from birth.  Cruz also has said that he is a “natural born Citizen” because of his birth to a U.S.-citizen mother, albeit in a foreign country.

Over the last century, the eligibility of a number of presidential candidates has been questioned, including by Breckinridge Long, who later served as third assistant Secretary of State under President Woodrow Wilson and ambassador to Italy under FDR.  In an essay published in the Chicago Legal News in 1916, Long questioned whether or not Charles Evans Hughes, Woodrow Wilson’s Republican presidential rival, was a “natural born Citizen” given that his parents were still British citizens when he was born in New York City.

Rubio was a contender in the 2016 presidential race but suspended his campaign following a poor showing in the March 15 Florida primary.  Rubio’s birth circumstances are similar to Hughes’s in that he was born in the U.S. to parents who were legal immigrants from Cuba but had not yet naturalized.

Challenges to Cruz’s eligibility, despite the suspension of his campaign on Tuesday, remain active at the U.S. Supreme Court and in New Jersey and New York appellate courts to the best of The Post & Email’s knowledge.

In addition to Cruz’s birth in Canada being a factor in his eligibility, some Americans have speculated that his claimed U.S.-citizen mother may have taken British or Canadian citizenship while she lived in either country prior to Ted’s birth in Calgary in December 1970.  In January, McClatchy News Service reported that Eleanor Darragh was first married to Texan Alan Wilson in 1956 and that the couple went to England in 1960 for employment purposes.

McClatchy further stated that in a telephone interview with Alan Wilson, who still resides in the UK, he stated that neither he nor Eleanor ever became British subjects. Wilson reportedly recalled that he and Eleanor divorced “about 1963” and that the child she bore in 1966 was not his.  That child was named Michael, whose birth and death certificates were located by the British researcher last month.

In an interview with Canadian journalist Gillian Steward on Tuesday, The Post & Email was told that a New York Times reporter with whom Steward spoke in person following the publication of the McClatchy article was troubled that McClatchy had not reported that Alan Wilson is reportedly in an advanced stage of Alzheimer’s disease.  “The New York Times reporter was pretty surprised that that wasn’t mentioned in the story,” Steward told us.

Michael’s birth certificate shows that his last name was noted as “Darragh,” Eleanor’s maiden name, but the death certificate issued 5 1/2 months later bears the name “Michael Wilson.” The child died of “acute bronchitis” in a London hospital on December 7, 1966.

Research done by blogger Mary Cummins on Ted Cruz’s father, Rafael Bienvenido Cruz, and other aspects of Ted Cruz’s life narrative, produced an image titled “Report of the Death of an American Citizen” bearing the name “Michael Wilson” dated October 2, 1967.  A notation at the bottom of the image indicates that the infant was “included in mother’s passport…issued in London 10/3/66,” which appears to signify that Eleanor planned to travel with him prior to his tragic death two months later at the Hospital of St. John & St. Elizabeth in London.

The consular document indicates that Eleanor was receiving mail at an address in Louisiana but residing at the same address as Alan Wilson in London despite their reported divorce in 1963.

In several email exchanges prior to the publication of this article, Cummins told The Post & Email that the images she has published on her blog were found at Ancestry.com, including the consular report, which she sent us. 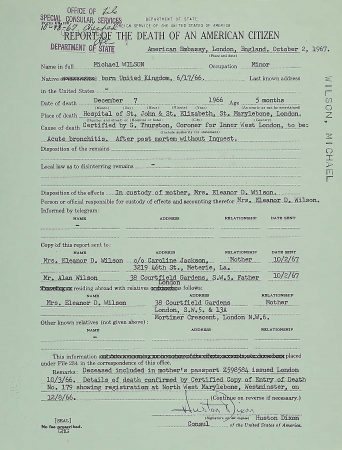 On April 20, The Post & Email submitted a FOIA request to the National Archives and Records Administration (NARA) which reads:

I would like to place a request under FOIA for a Report of the Death of an American Citizen for a deceased infant born abroad, if it exists within your records.

I am also seeking a Consular Record of Birth Abroad (CRBA) or its equivalent for the same child, if it exists.  There are two different names under which the reports might have been made.

The subject information is as follows:

I am willing to pay reasonable fees for the documents if they are located. I can accept electronic delivery to save time and postage.
Please advise if the cost will exceed $25.00.

On May 4, The Post & Email received the following response from David Langbart of NARA:

Dear Ms. Rondeau:
This is in response to your April 21, 2016, Freedom of Information Act request (#49912) about Department of State records (birth and death reports)  We received your request on May 4, 2016.
For records relating to births of American citizens in a foreign country after 1938, contact the Department of State, Passport Services, Vital Records Section, Room 510, 1111 19th Street NW, Washington, DC 20036 or consult their web site at http://travel.state.gov/travel/aztopics/aztopics_4187.html.
A “Reports of Death of An American Citizen Abroad” for Michael Wilson (DOB June 17, 1966; DOD December 7, 1966) is in the files.  Those records have been digitized and are available on Ancestry.com.
This concludes the processing of your request.
If you consider this an adverse response, you may appeal by writing to the Deputy Archivist (ND), National Archives at College Park, 8601 Adelphi Road, College Park, Maryland, 20740-6001, and explain why you think our search does not meet the requirements of the FOIA.  Please note “Freedom of Information Act Appeal” in the subject line of your email and be sure to include your case number. Appeals must be received within 60 days of the date of this communication.
Sincerely,
DAVID A. LANGBART
Textual Records Division
National Archives at College Park, MD
david.langbart@nara.gov
www.archives.gov
RDT2 16-31187

We therefore conclude that the Report of the Death of an American Citizen found by Cummins at Ancestry.com is authentic. In perusing NARA’s website, The Post & Email located a page with the Ancestry.com logo affirming Langbart’s response concerning its repository of government records. The page states:

Since 1998, Ancestry.com has digitized and indexed millions of NARA records to create the largest collection of NARA records online. Starting in the spring of 2008, we began scanning documents on location at NARA. This is enabling access to more U.S. historical records online than ever before.

Our growing collection of NARA records includes more than 750 million names and 70 million images in census, immigration and military records, among many others.

After receiving Langbart’s email, The Post & Email submitted a FOIA request to the State Department for any birth record which might exist for “Michael Wilson” or “Michael Darragh,” born on June 17, 1966 in the United Kingdom.

On Friday morning, The Post & Email spoke with Cummins, asking her what prompted her to undertake her extensive research on Cruz and his family.  “When I first heard the rumors that he might not be a U.S. citizen, I thought, ‘I know a lot about genealogy and ancestry and history; I can prove that he is a citizen of the United States,'” she responded.  “Then I started digging more and more and uncovering different things which started to make me question things.  I still don’t have any irrefutable proof that he isn’t a citizen; I think he is a U.S. citizen.  My research took different turns around the way, and then people started contacting me asking me for documents and information.”

Cummins said she has also researched the histories of Donald Trump, Bernie Sanders and Ben Carson.

Regarding the question of whether or not Ted Cruz is a “natural born Citizen” as it relates to her research, Cummins told us, “The people who sued over Ted Cruz’s citizenship contacted me for information and gave me information on their legal filings.  Because my blog shows up for key words ‘Ted Cruz’ and ‘history’ and ‘birth certificate,’ I get a whole bunch of people contacting me about this, and I’ve received a lot of information which was very helpful.  There was a reason the Founders specified ‘natural born Citizen,’ because they didn’t want someone from another country to become the president.”

Both Cummins and another researcher, MF, provided additional images from Ancestry.com about the Cruz family to The Post & Email for this report.  MF also accessed other online sources for information.

The question as to whether or not Ted Cruz was registered by his mother as a U.S. citizen born abroad remains unanswered, and any records the U.S. government might hold on Cruz have been withheld from FOIA requesters because of privacy considerations.

Regarding the death report for Michael Wilson, Cummins theorized that the hospital where he passed away notified the U.S. consulate in London and that the information as to Eleanor and Alan Wilson’s residences might have been provided by Eleanor through a phone call from the consulate to complete the record.

In a subsequent article, The Post & Email will report on a conversation it conducted with a State Department spokeswoman who explained the process by which U.S. citizenship is determined when a person is born overseas.