AS DECIDED BY U.S. SUPREME COURT 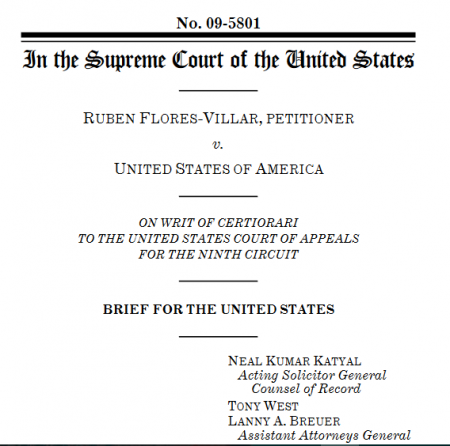 (Apr. 17, 2016) — Early in the Obama regime, Neal Kumar Katyal served as Deputy Solicitor General followed by Acting Solicitor General within the U.S. Department of Justice.  He is considered to possess a brilliant legal mind and was selected to receive the Edmund Jennings Randolph Award by then-Attorney General Eric Holder in 2011.

In 2014, Katyal argued on the government’s behalf to uphold the Patient Protection & Affordable Care Act (PPACA), colloquially known as “Obamacare,” and celebrated the U.S. Supreme Court decision upholding the law’s health insurance exchanges last June through the illustration of “three legs of a stool.”

Katyal also worked in the Clinton administration as a Special Assistant to the Deputy Attorney General.  Prior to that, he clerked for U.S. Supreme Court Associate Justice Stephen G. Breyer.

Katyal obtained his undergraduate degree at Dartmouth and his J.D. at Yale Law School.  Having argued numerous cases before the U.S. Supreme Court on behalf of the United States as Acting Solicitor General, he is now employed in private practice at Hogan Lovells and also serves as a Paul and Patricia Saunders Professor of National Security Law at Georgetown Law.

Breyer was a member of the Supreme Court when Katyal argued for the United States in the 2010 case of Flores-Villar v. United States wherein the plaintiff, Ruben Flores-Villar, who was deported in 1997 following his conviction for bringing marijuana into the U.S., claimed in a lawsuit that “The Statutory Scheme for Acquisition of Citizenship by Non-Marital, Foreign-Born Children Discriminates Based On Gender.”

Flores-Villar was born in Mexico to a 16-year-old U.S. citizen father and Mexican mother.  His father reportedly acknowledged paternity to Mexican authorities when Ruben was 11 years old but raised him in the United States.  Ruben’s claims to derivative citizenship through his father and violations of the Equal Protection clause in the 14th Amendment and the due process provision of the Fifth Amendment were rejected by the lower courts.

The immigration law passed by Congress in 1952 (p. 74) which applied to Flores-Villar mandates that a U.S.-citizen father of a child born outside of marriage in a foreign country cannot pass his citizenship to his child unless he has resided in the U.S. for a total of ten years, five of which must have been after the age of 14.  However, for a U.S.-citizen unmarried mother, the law mandates only one year of U.S. residency to pass her citizenship to her foreign-born child.

After re-entering the U.S. on several occasions, Flores-Villar was considered a “removed alien,” sentenced to a 42-month prison term, and deported.

Elena Kagan, having served under Obama as Solicitor General, recused herself from hearing the U.S. Supreme Court case in November 2010.  On June 13, 2011, the eight-member court upheld the decision of the Ninth Circuit Court of Appeals concerning the constitutionality of the law which designated different residency requirements for U.S.-citizen mothers and fathers whose children were born outside of the U.S. who they wished to be U.S. citizens.

On March 11, 2015, an editorial published in the Harvard Law Review Forum (HLRF) titled “On the Meaning of ‘Natural Born Citizen'” attempted to make the case that U.S. Senator Ted Cruz, who was born in Canada to a Cuban father and reported U.S.-citizen mother, is eligible to the presidency of the United States as a “natural born Citizen,” as required by Article II, Section 1, clause 5 of the U.S. Constitution.

The essay is listed on Katyal’s Georgetown Law biography and available in the facility’s law library.  Although not referring to it directly, Cruz has often cited the 1790 Naturalization Act, which deemed children “born across sea” to U.S.-citizen parents to be “considered as natural born citizens,” as the basis for his eligibility to seek the presidency.

The Act was repealed and replaced in 1795, which neither Cruz nor Katyal have stated, and Congress has never again passed a statute invoking the term “natural born citizens.”

Cruz is facing a number of lawsuits and ballot challenges to his eligibility as the primary season progresses.  Some legal scholars believe he is eligible by virtue of his birth to a single U.S.-citizen parent, while others say that his birth outside the country, regardless of his parentage, disqualifies him.

Article I of the Constitution sets forth different requirements for U.S. senators and representatives, respectively. Neither chamber of Congress requires its members to be a “natural born Citizen,” but rather, a “Citizen” for nine or seven years, respectively, as was written by the Framers at the Constitutional Convention of 1787.

In his HLRF essay, co-authored with another former solicitor general, Paul Clement, Katyal argued that Cruz, despite his birth “across the border” in Canada, meets the “natural born Citizen” requirement by having been born to a U.S.-citizen mother.  “All the sources routinely used to interpret the Constitution confirm that the phrase ‘natural born Citizen’ has a specific meaning: namely, someone who was a U.S. citizen at birth with no need to go through a naturalization proceeding at some later time. And Congress has made equally clear from the time of the framing of the Constitution to the current day that, subject to certain residency requirements on the parents, someone born to a U.S. citizen parent generally becomes a U.S. citizen without regard to whether the birth takes place in Canada, the Canal Zone, or the continental United States,” the authors wrote, also citing the 1790 Naturalization Act without disclosing that it had been repealed.

The “natural born Citizen” requirement was written in to the Constitution in 1787, before any “acts of Congress” were passed.

In their essay, the two former solicitors general also maintained that Cruz, as a U.S. “citizen from birth,” meets the constitutional requirement of “natural born Citizen.”

Cruz was born on December 22, 1970, as evidenced by his Canadian birth certificate released to The Dallas Morning News nearly three years ago.  Thirteen months after Katyal and Clement wrote their essay in favor of his alleged “natural born” status, reports as yet unconfirmed by this publication say that Cruz’s mother at some point became a Canadian citizen.  Her husband, Rafael Bienvenido Cruz, has acknowledged becoming a Canadian while operating a business in Calgary, Alberta roughly between 1968 and 1973. In January, Macleans of Canada reported that Rafael’s Canadian naturalization occurred in 1973.

The younger Cruz has shown no documentation of U.S. citizenship despite numerous requests to elucidate the voting public about his background.

In February, Breitbart News reported that the Cruzes appeared on a 1974 Canadian voter roll but that a statement from the Cruz campaign said that they were ineligible to vote in Canada and did not participate in any Canadian elections.

In the last paragraph of their essay, the writers stated:

…for better or worse, a naturalized citizen cannot serve.

On page 31 of 65 of the U.S. Supreme Court holding in Flores-Villar, the court stated, “The fact that Congress has enacted a law under which some foreign-born individuals acquire U.S. citizenship at birth by virtue of a parent’s citizenship does not mean that such individuals are not naturalized for purposes of the Constitution.” 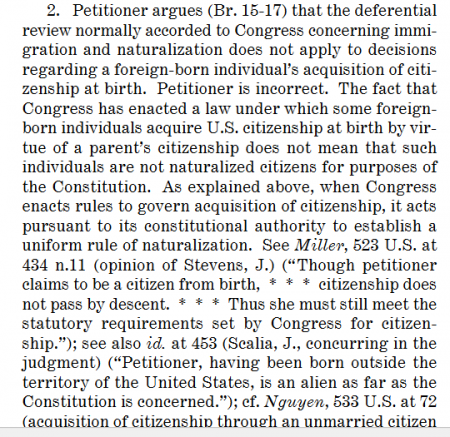 CDR Charles F. Kerchner, Jr. (Ret.), who provided the tip for this story gleaned from a comment at Atty. Mario Apuzzo’s website, has often used the “three-legged stool” analogy to illustrate his contention, based on the historical research he and many others have conducted over the past eight years, that in order to be a “natural born Citizen,” one must be born in the U.S. to a U.S.-citizen father and U.S.-citizen mother.