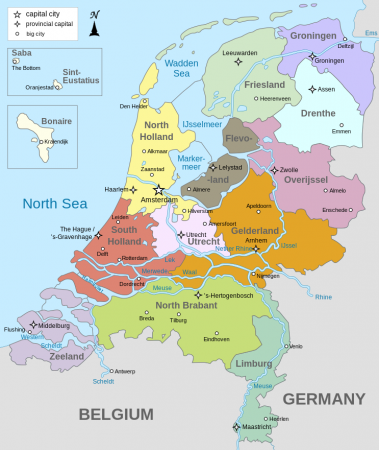 In June 2011, The Gatestone Institute reported:

The Dutch government says it will abandon the long-standing model of multiculturalism that has encouraged Muslim immigrants to create a parallel society within the Netherlands.

A new integration bill (covering letter and 15-page action plan), which Dutch Interior Minister Piet Hein Donner presented to parliament on June 16, reads:  “The government shares the social dissatisfaction over the multicultural society model and plans to shift priority to the values of the Dutch people…”

Received today in an unattributed email was the opinion that the Netherlands’s five-year-old decision “gives a whole new meaning to the term, ‘Dutch Courage’…Unfortunately, Australian, UK, USA, Canadian, and New Zealand politicians don’t have the guts to do the same.”

The preceding illuminates the world’s major problem: a migrating band of murderous tribespeople. They have been on the move since the 7th Century AD, leaving in their wake the devastation of millions of dead, tortured, maimed, starving, homeless, raped and mutilated civilized members of the human race not unlike the holocaust of World War II, the brutality and savagery of Soviet Russia, and the regimes of Hideki Tojo’s Japan and Pol Pot’s ravaged Cambodia in which some 2 million citizens were murdered between 1974 and 1979, a blatant example of Genocide.

What do we do when we encounter a nest of “Fire Ants”?

Is that a difficult question? Of course not! You “BURN them out!” Yes! You literally ‘Burn them out.’ They are not only a nuisance; their sting can actually kill a baby, an infirm elder or any weakened human.

Fire Ants present to humankind a problem having a simple, yet at times difficult problem. If Fire Ants had some observable, some salutary value, we as humans would find a way to make use of such value as these nuisances present. The Creator gave Humankind dominion over the Earth: “With the authority to rule comes the responsibility to rule well. There is an inherent accountability in the command to ‘subdue’ the earth. Man has a duty to exercise his dominion under the authority of the One who delegated it. All authority is of God (Romans 13:1-5), and He delegates it to whomever He will (Daniel 4:17). The word subdue doesn’t have to imply violence or mistreatment. It can mean “to bring under cultivation,” as in ‘The pioneers subdued the wilderness.’”

Is it not reasonable to liken fire ants and mosquitoes to other bothersome, hurtful non-productive creatures whose sole purpose is to ravage this bountiful Planet Earth and to do its humanity harm? That must be seen as a most apt comparison. The allegorical catechism leads to a final question: “Should Islam and its adherents be characterized as the “Fire Ants” of humankind and thus subject to the dominion of the true Homo sapiens and consequent eradication?

I am surprised it took the Dutch so long to realize what was happening. We must do even better here, DEPORT ALL Muslims; because they will NOT change. Is it even remotely possible that any Jew, Christian, Buddhist, follower of Shintoism, Zoroastrian, Hindu or even an atheist could conceive of a deity who would promise a suicide bomber even 1 VIRGIN for having murdered 50 or 60 enemies of Allah?  What sin did this virgin commit to condemn her to the rapacious hat of a Muslim killer? My God is fully aware of the base nature of humankind and their habitual disobedience to the small number of Commandments He has set down in Holy Scripture.

They are a bunch of ignorant, defiant, rapacious savages under the guise of a cult that has been murderous since the 7th Century AD. They are barred from immigration into Japan, and several other nations are in serious discussion to do the same. Donald Trump has advocated for deportation of Muslims from the United States.

Some millions are going to have to DIE to resolve this really simple problem some see as a dilemma, i.e., “a situation requiring a choice between equally undesirable alternatives.” Either WE exterminate THEM or they persist in brutally killing civilized people by the hundreds until we either become Dhimmi, “Slaves of Islam,” or are ourselves exterminated. Muslims are not unlike “fire ants.”

They serve NO USEFUL purpose; they exist as vermin to be eradicated wherever they appear. They have contributed NOTHING to the civilized world, contrary to the rhetoric of Barry Soetoro-Obama and have no apparent desire to do so. How might we accomplish this? We give Iran, Saudi Arabia. Iraq, Syria, Libya, Egypt, Yemen, Qatar, UAE, the entire Islamic community, an ultimatum: “We the people of the civilized world are no longer going to tolerate your uncivilized behavior with its intolerable maltreatment of females, the unforgivable murderous genocide precipitated by Islam. We are prepared to begin an extermination not seen since the worldwide flood of Biblical times and proportions. This will be the “Firestorm” promised by the God of the Jews and Christians at that point in time when humankind becomes so disobedient and disrespectful of God that HE sets in motion forces so powerful that all mankind either becomes obedient or will be totally destroyed. The first enclaves of barbarism to be ‘eliminated’ will be Teheran, Riyadh, Mecca, Doha, Dubai, Cairo, Tripoli, etc.  Understood? NO? Too damned bad. No Obama-Kerry conflabs or illegal compromises. No more sanctions or delays. Either YOU stop these barbarians NOW or WE will!

One Response to "Getting Rid of the Fire Ants"