“IT CHANGES THE DYNAMICS COMPLETELY” 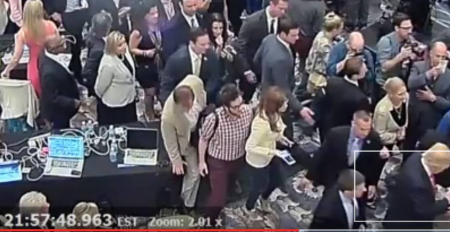 (Mar. 30, 2016) — On Wednesday evening, The Post & Email spoke with former police detective and Maricopa County, AZ Cold Case Posse lead investigator Mike Zullo about the videotape released by the Donald Trump campaign to the Jupiter, FL Police Department to assist in the investigation into an allegation made by a former Breitbart reporter, Michelle Fields, against Trump campaign manager Corey Lewandowski.

On March 8, Fields attended a Trump “victory” rally following several primary state contests in which Trump fared well against his competition.  When the event ended, Trump and his Secret Service detail began to exit the room.  The video shows that Fields, wearing a white jacket, was held back by Lewandowski’s grasp on her left arm, which Fields reported to police on March 11 as having been bruised from the incident.

Fields originally said that after the rally concluded, “Trump wandered around, stopping at every reporter to take their questions. When he approached me, I asked him about his view on an aspect of affirmative action.”

But does the video depict Trump “approaching” Fields?

Fields then claimed that Lewandowski “yanked me down” and “tried to pull me to the ground.”

Is that what the video shows?

Many reports used the word “grabbed” or “grabbing” to describe Lewandowski’s action toward Fields.

In his analysis of the video on Wednesday evening, Zullo told The Post & Email:

If you look at the videotape again, focus on the male behind Trump in the tan jacket.  He is behind the bearded male with glasses, wearing maroon trousers, directly behind Fields.  You will observe what appears to be another Secret Service agent trying to make his way rapidly to Trump.  In doing so he pushes the male in the tan jacket out of the way into the black-draped table. You can see him stumble into the table and turn and look to the agent as he rushes past, getting to Trump.  The agent appears to be moving with determination, possibly concerned for Trump’s safety. Fields, reporter or not, would have been a concern due to her extremely close proximity to Trump and the fact that she had already made physical contact with Trump.   This changes the whole perception of this video.

Fields was not the only person jostled out of the way that day.  It’s at the 11-second mark in the video.   Both agents and Cory Lewandowski were trying to get to Trump.  You can see Trump looking at his sleeve as she was tugging on it.  One Secret Service guy is behind her, but then another Secret Service comes up in the rear.  The male in the tan jacket actually has to grab onto the table beside him and the male in the maroon-colored pants.  That shows you that this event is nowhere near what they’re portraying it to be.

I’ve worked dignitary protection details for the [Maricopa County] Sheriff’s Office.  I worked them in New Jersey for state senators as a police officer and in the private sector.  Unfortunately, this is always a tough job for the Secret Service.  These events are oftentimes very fluid, and sometimes you can lose a little control of your principal, which in this instance was Trump. You have to move deliberately and decisively to regain control of your principal’s immediate environment for his safety.  You can see they were trying to close the gap and better secure their principal.

On Wednesday evening, Fields published a petition signed by 16 female “media members” calling for Trump to fire Lewandowski over what they described as “inexcusable, unprofessional behavior” toward Fields on March 8, to which Fields responded on Twitter, “So grateful for their support.” 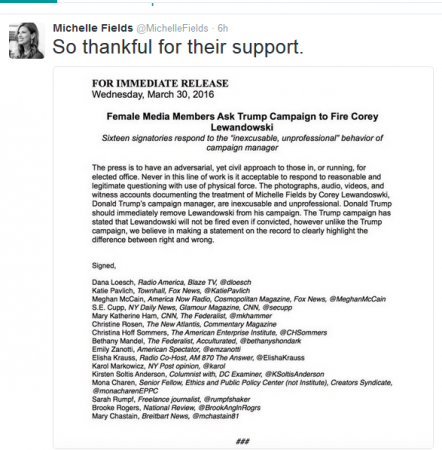 A significant number of the women, if not all of them, have openly expressed their dislike of or disdain for Trump as a presidential candidate.  While termed “journalists,” many of them are opinion writers.  “Journalism” is the unbiased reporting of facts to elucidate the public, not the expression of opinion or political preference.

Dana Loesch appears on The Blaze TV, which is operated by commentator Glenn Beck.  Both Loesch and Beck participated in an anti-Trump blitz beginning in late January in National Review and National Review Online.  Beck has endorsed Canadian-born Ted Cruz for U.S. president, opining that he is “divinely anointed” to become the next commander-in-chief.

Mona Charen writes for National Review, which its editor states is a “commentary” publication.

Katie Pavlich, an opinion writer at Townhall.com, has openly opposed the candidacy of Donald Trump in her columns and on Fox News’s “The Kelly File” hosted by Megyn Kelly, who herself has arguably shown anti-Trump bias at times.

Chastain appears to be a reporter of short articles for Breitbart.

Is it possible that an organized effort has been launched to oust the successful campaign manager of a candidate the group of female “journalists” does not favor?