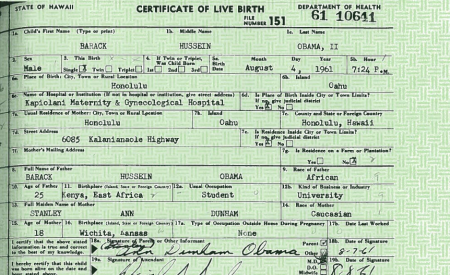 (Dec. 1, 2015) — At BirtherReport.com on November 28, a comment was posted to an article under the name “ZuluBravoTango” which reads:

Zullo believes that Dennis Montgomery has proof that Obama’s birth certificate was created with three different versions of Adobe software, and that there are hallmarks of the CIA in it. Until Montgomery gets immunity for stealing CIA data, he’s not going to hand over the proof. It’s a Catch 22. This is the big legal hurdle Zullo was talking about all along–immunity for his confidential informant. Plus Montgomery’s been having strokes. He could die at any moment, and that would be the end of it. I’m really surprised that he hasn’t died already–know what I mean?

The comment appears to respond to the previous one made by “Jason,” who asked, “So where is the earth shattering info from Zullo & Gallops & Freedom Friday?” referencing the weekly radio show of pastor and host Carl Gallups, who has provided updates on the criminal investigation launched by the Maricopa County Cold Case Posse more than four years ago into the long-form birth certificate image posted on the White House website purported to be Barack Hussein Obama’s.

According to a U.S. Navy website, the term “Bravo Zulu” means “well done.”  LCDR Walter Francis Fitzpatrick has often used the term both orally and in writing in his numerous interviews and letters exchanged with The Post & Email.  Military code assigns a word to each letter of the alphabet to convey information accurately and consistently by NATO countries.  The coding system is known as the “International Radiotelephony Spelling Alphabet (IRSA).”

The comment appears to refer to Mike Zullo, lead investigator of the Cold Case Posse, which launched its probe of the birth certificate image in September 2011 at the request of Maricopa County Sheriff Joseph M. Arpaio. The image was released after much public clamor in early 2011 from businessman Donald Trump, who demanded proof that Obama prove he is constitutionally eligible to serve as president and commander-in-chief.  Trump believes that “you’re supposed to be born in this country” to be president in keeping with the “natural born Citizen” clause in Article II, Section 1, clause 5 of the Constitution and has applied the same standard to Sen. Ted Cruz, now a presidential candidate competing with Trump for the 2016 Republican nomination.

Within 24-48 hours of the image’s appearance online on April 27, 2011, several software and graphics analysts declared it a forgery, one of whom appeared on a local television station and provided The Post & Email with a telephone interview.

Following approximately six months of probing, on March 1, 2012, Zullo and Arpaio gave the first of two press conferences to announce and detail their conclusions that both the birth certificate image and Obama’s purported Selective Service registration form are “computer-generated forgeries.”

During the second presser on July 17, 2012, the two stated that the standard of “probable cause” had been exceeded in regard to the forgery of the birth certificate and called upon Congress to launch its own investigation.

Neither the media nor Congress acted.  Many in the media ridiculed the messengers rather than exhibited curiosity about why fraudulent “documents” were released to the public bearing Obama’s name.

When Obama sought the presidency in 2008, Will Hoover of The Honolulu Advertiser and Chris Matthews of MSNBC had stated that Obama was “born in Indonesia.”  Some reports dating back to Obama’s 2004 U.S. Senate campaign stated that he was born in Kenya.

In 1991, Obama’s literary agent published a biography describing Obama as “born in Kenya and raised in Indonesia and Hawaii,” a statement changed without explanation in April 2007 after Obama announced his presidential candidacy.  When asked to explain the alteration, the former literary agent stated that she had made a “fact checking error” when Obama’s biography was first released in anticipation of his book, Dreams From My Father.”

Obama claims he was born in Honolulu, HI on August 4, 1961, but no hospital there has claimed the birth.  Following the White House’s release of the birth certificate image, Obama said during a brief press conference that the “site of my birth” is “Kapiolani Hospital.”

According to Zullo in April 2013, the birth certificate image “is not a representation of where this man was born.”  The following month, he told The Post & Email, “The intent behind it was to deceive.”

The White House later claimed to have been the source of the “Certification of Live Birth” which several HDOH officials have claimed is now the standard form released to requesters.

For approximately a year, former NSA and CIA contractor Dennis Montgomery worked as a confidential informant to Arpaio’s office after claiming in November 2013 that he possessed evidence showing that the personal banking information of more than 150,000 Maricopa County residents had been breached by a government entity.  He also alleged wiretaps, breaches of email accounts, and communication among the judge presiding over a civil lawsuit naming Arpaio as a defendant, the U.S. Department of Justice, at least two law firms representing the plaintiffs in the case, and the judge’s former law clerk, who reportedly went to work for Obama’s law firm, Perkins Coie.

Montgomery reportedly suffered at least one stroke during the time he worked for the Maricopa County Sheriff’s Office (MCSO), and several bitter emails were exchanged between Zullo, who helped to oversee the project, and Montgomery over his health and other factors which may have affected his ability to produce what he allegedly promised.

During his April 23, 2015 testimony in the civil contempt trial stemming from the lawsuit, Arpaio told presiding U.S. District Court Judge G. Murray Snow that most of Montgomery’s work product was “junk.” However, spurred by a June 4, 2014 article in the Phoenix New Times, which openly opposes Arpaio’s policies, Snow ordered the collection of all data associated with Montgomery’s work. Emails, audio-recordings and other documentation were turned over to Arpaio’s defense team, although Zullo attempted to prevent the disclosure of 87 exhibits after Arpaio’s defense attorneys informed him that they did not represent his interests.

On April 24, Arpaio’s chief deputy, Gerard Sheridan, testified that wiretap codes Montgomery provided to the MCSO were confirmed authentic by the former head of the FISA court, U.S. District Court Judge Royce C. Lamberth, which “gave him a little more credibility with us,” according to Sheridan.

One of the recordings from the investigation aired in court during the week of November 9 depicts liaison Tim Blixseth stating that Montgomery had unsuccessfully sought “immunity” from 18 different federal agencies in regard to the documentation he reportedly possessed.

In late August, however, Montgomery’s current attorney, Larry Klayman, told the court in a hearing in a different lawsuit that his client was granted immunity from the FBI.

A source who attended the civil contempt hearings last month told The Post & Email that Zullo testified to having formulated and followed through with a plan to bring Montgomery to a federal judge in an attempt to obtain immunity for him so that he could turn over the documents he possessed.

The transcript of the testimony from November 12 and 13 is not yet publicly available, but our source said that once released, “Zullo’s testimony should be riveting.”

Local and national media provided very little coverage of Zullo’s statements other than to say that he became emotional at times.

“ZuluBravoTango” referenced a “big legal hurdle,” possibly one of several, to which Gallups referred on “Freedom Friday” last January.  Zullo has previously mentioned three such “hurdles,” two of which he reported were resolved.  However, he said the third “might never be resolved.”

Zullo has been criticized for failing to disclose more information from the investigation since Gallups announced that “universe-shattering” information would be released in March 2014, although he has explained that unexpected “new information” was provided which precluded the planned press conference.

Among much speculation as to where the investigation might have led, Zullo has said, “If you don’t hear it from me, it isn’t true.”

In a conversation which took place before he was subpoenaed to testify about his knowledge of Montgomery’s work in Arpaio’s civil contempt trial, Zullo told The Post & Email that his silence “is like torture.”

Our courtroom source said that Zullo’s testimony provided a glimpse into the “complexity and dynamics” of what was unfolding over the last 16 months concerning the criminal investigation undertaken by the Cold Case Posse and that he believes “there is a strong possibility that new information could be forthcoming.”

Will the new information be revealed?  Only time will tell.