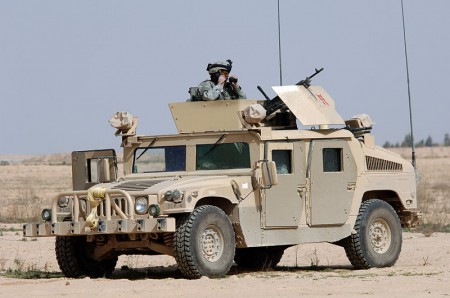 “My so-called ‘attitude’ has nothing to do with our current situation. Now, I don’t want to sound rude or anything, but if you would take a minute off from our busy guard duty and look around this wasteland, you’ll notice that we’re at the end of the world. I used to think that Cabuya, Costa Rica was the end until I joined up, and then Parris Island became the end, but this place has got to be the real end. It’s like the Man Upstairs prepared me for this place, and on guard with someone who doesn’t appreciate a good joke. Too bad for you, because if you don’t appreciate that at this time and in this place we’re the two most worthless and expendable human beings on the whole planet, then you’ve lost your sense of humor.”

“See what I mean? You think that this is some sort of joke, being expendable. Why, we could be killed in this ‘missing-in-inaction’ Godforsaken hellhole and no one would notice. Take a ride in a Hummer and get maimed, and what’s the point? We’re letting them into our country, for Pete’s sake. Let’s see you explain that one away.

“And another thing. These morons giving up freedom so casually, ‘free’ education and so on. If they had to fight and work for freedom, they would hold it a lot closer to their hearts, this I can tell you.”

“And you just made my point. Thank you.”

“Yes, you did. You said it yourself: ‘missing in inaction.’”

“Look, I’m not complaining, but why did we have to go through all those months of training just to sit here and be targets? Why, if we show ourselves, some sniper will take a shot at us, but if we don’t show ourselves, the Captain will think we’re loafing. I don’t get it.”

“Easy. First, do you agree that we’re at the low end of the totem pole? Right? Second, that we’re out of the loop, that no one really gives a hoot about what we think, imagine, speculate or care about. Okay? Fine. So if we do our job, we’re dead. If we really do our job, that is, stay alive, the Captain gets upset and threatens to throw the book at us. You know the routine: Court-Martial, prison, Dishonorable Discharge and, by some mysterious power, it all finds its way into your town’s newspaper.

“Or, just don’t take is so personally. See, my grandfather was in Vietnam, and the first thing you got to remember, he told me, was that the enemy doesn’t know your name and that the bullet he fired at your head could’ve been just as well aimed at someone else’s head. See what I mean?”

“I get it, I get it, but I’m just not buying it. That bullet flying through the air, subject to the curvature of the earth, wind direction, and a trillion and one other things, does know my name. Even my middle name. My future wife’s maiden name. Even her first name. My yet-to-be-born kids’ names. I know there’s nothing I can do about it, so I might as well just accept it, but I sure as heck don’t have to like it.

“This Muslim we have in our company really bugs me. All I can say is that I’m glad he’s not in our squad. I mean, doesn’t Ft. Hood mean anything to anybody? Haven’t we learned anything? I mean, really. I don’t know about you, but any respect I ever had for the Joint Chiefs of Staff, the Pentagon and all those politicians has vanished, as if I had any respect for them in the first place.

“Okay, I know I’m cannon fodder. I accept it, I mean as if there’s a choice, right? What the heck, let’s be proud that, even though this is not a real war, people are dying just the same. It may not be a great war, but it sure is a Great Adventure.”

“Some adventure. And all the countries (France) that have welcomed Muslims are getting their fair share of mass murders, as if that’s a surprise, getting back to Ft. Hood. And Muslims don’t need, or want, for that matter, an excuse to murder: it’s what being a Muslim is all about: spilling blood for their god that seems to have an insatiable appetite for dead humans, any sex and any age.

“Remember those murders at that schoolhouse in Russia? That’s my point: put Muslims in with normal people and the Muslims go on killing rampages; that‘s just they way they are. There’s no so-called ‘negotiating.’  You’d think that the world would’ve learned from what happened in Beslan, but then I don’t believe that any politician, at any time, has ever been accused of being smart. Trump says to deport illegal immigrants, but I’d like him a lot more if he would add Muslims to that equation.”

“Hey, look. The Captain showed up right on time with our replacements. Afternoon, Sir.