(Nov. 10, 2015) — In a tweet on Tuesday morning, former Rep. Steve Stockman deplored what he sees as a media double standard between the scrutiny of Dr. Benjamin Carson’s background and that of the current occupant of the White House, Barack Hussein Obama.

Last week, news sources Politico and CNN reported that certain aspects of Carson’s life story as told in his book, “Gifted Hands,” were either inaccurate or difficult to verify, respectively. While Politico focused on Carson’s claim to have been offered a “full scholarship” to attend West Point Military Academy, CNN attempted to find former schoolmates and neighbors of Carson’s who could verify his claims of violent tendencies during his youth.

On Friday, Politico trumpeted that “Carson claimed West Point ‘scholarship’ but never applied” after changing its headline, rewording parts of the article, and adding an editor’s note explaining the writer’s initial errors.

Politico said that it nevertheless “stood by” its reporting.

On March 1, 2012, a six-month criminal investigation revealed that the long-form birth certificate image posted on the White House website on April 27, 2011 bearing Obama’s name was likely a “computer-generated forgery.”  In a second press conference in July of that year, investigators declared that the standard of probable cause in the forgery of the image had been surpassed, calling upon the media and Congress to launch their own investigations into the findings.

Stockman, who decided not to run for reelection to the US House of Representatives last year, was said to have made a commitment to expose the forgery of the long-form birth certificate image after having met with Maricopa County Cold Case Posse lead investigator Mike Zullo in 2013. In June 2013, Stockman was scheduled to appear as a guest on Carl Gallups’ “Freedom Friday” but was reportedly delayed because of weather-related difficulties.

Having ultimately spoken with Zullo twice about the forgery issue, Stockman never came forward publicly about it.  Although he is no longer in Congress, he continues to use the twitter name “@SteveWorks4You.”

In early 2014, Stockman had publicly called for Obama’s impeachment and the arrest of former IRS supervisor Lois Lerner, who admitted to having targeted “conservative” groups for extra scrutiny, delaying some application responses for years by asking unreasonable and intrusive questions.  The U.S. Department of Justice recently announced that Lerner will not be charged criminally for her role in the scheme.

According to Gallups, his congressman, Jeff Miller of Florida’s First District, had committed to meeting with Zullo and Gallups in person about the evidence of fraud collected by the posse. However, after Gallups followed up to make the arrangements, Miller’s office denied ever having expressed an interest in the matter.

Former Rep. Joe Walsh was also reported by Zullo to have committed to reading the posse’s findings into the Congressional Record and “demand[ing] an investigation,” but in the end “just walked away.”

Also according to Gallups, “persons of interest” in the forgery were identified more than two years ago.

In response to Stockman’s tweet, The Post & Email wrote, “Congress never investigated the BC forgery, either: http://mcsoccp.org/joomla/” to which there is no response as of press time.

The tweet also went to Carson and National Public Radio.

Politico does not appear to have reported on the declared forgeries of Obama’s long-form birth certificate and Selective Service registration form as determined by a criminal investigation more than three years ago.  However, its writers have acknowledged in a subtle fashion that questions about whether or not it existed have been raised.

CNN has presented its own “investigation” of Obama’s short-form birth certificate, which lacks a raised seal and has also been deemed a forgery by a number of experts.  The second part of a two-part series released just before the White House published what it said was a scan of a certified copy of Obama’s original birth certificate has been inexplicably removed from the web.

This writer recalls that the second part showed what appeared to be microfilm at the end of the second part in the series with the implication that Obama’s birth information was contained therein when it was not.  Also recalled is a comment sent to CNN through its “Contact” portal about the misleading aspect of the microfilm and having received no response.

Congress was explicitly asked to vet Obama prior to the unsealing of the Electoral College votes cast for him in the 2008 and 2012 presidential elections but approved the respective vote counts without debate.

Obama’s eligibility for the office remains an open question with millions of Americans who have read news reports which stated that he was born in Kenya or Indonesia and not Hawaii, as he claims. Obama claims a foreign-citizen father who never naturalized as an American citizen, which many historians and constitutional scholars claim should have been enough to disqualify Obama given that Article II, Section 1, clause 5 of the U.S. Constitution states that the President and Commander-in-chief must be a “natural born Citizen.”

On his now-defunct FighttheSmears website established during the 2008 campaign, Obama claimed eligibility to the Oval Office under the 14th Amendment and his purported birth in Hawaii on August 4, 1961.  However, Zullo has stated publicly that there is no evidence that Obama spent any time in Hawaii before the age of five. 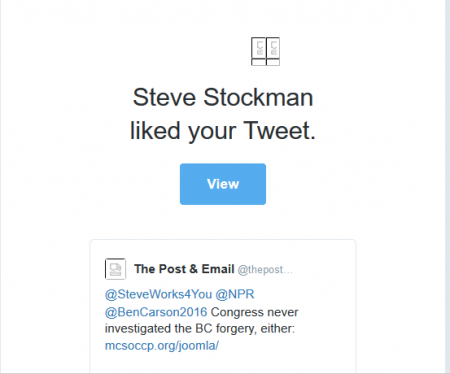 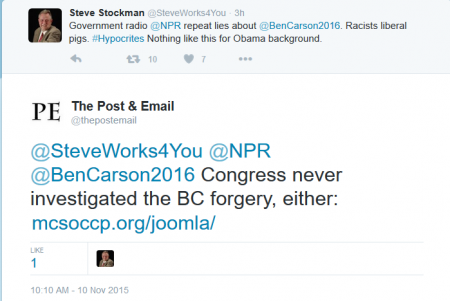