Last week, Carson’s past became a flashpoint when reporters challenged his claims to have attacked his mother with a hammer as a youth and having been offered a “full scholarship” to West Point Military Academy.

Earnest was quoted as having said, “This process is good for our democracy. It’s not easy to run for president. It shouldn’t be. And people who run for president are going to have their claims scrutinized, particularly about their own biography.”

On Friday, Carson responded to critics and the media by stating that Obama’s background did not receive close scrutiny in 2008 or 2012.  Previously, Carson told radio host Alan Colmes that he questioned how Obama, a self-admitted poor student during his first two years of college, could have been accepted by New York’s Columbia University, an Ivy League school with stringent entrance requirements.

Obama claims to have graduated from Columbia in 1983 with a Political Science major, but no one has come forward to say that he or she recalls his having been there.  According to 1983 Columbia graduate Wayne Allyn Root, Obama does not attend the school’s reunions and is the “ghost of Columbia University.”

Root quotes a “legendary professor” who reportedly said of Obama, “I have my doubts he ever went here,” meaning Columbia.

Both Carson and rival Donald Trump have called upon Obama to release college forms, with Carson calling for “transcripts” and Trump desirous of seeing “college and passport records.”  In October 2012, just before the election, Trump offered Obama $5,000,000 to go to a charity of his choice if he released his college application forms and passport application.  When Obama did not respond to the offer, Trump raised it to $50,000,000, which received the same non-response.

“We know very little about our president,” Trump said at the time.

Trump claimed credit for the release of Obama’s “long-form” birth certificate by the White House and said that he would have a team of people investigate whether or not it is authentic.  Trump has not released the results of any investigation which might have been conducted.

Obama’s literary agent reported him “born in Kenya and raised in Indonesia and Hawaii” until April 2007, when the biography was changed to say that he was “born in Hawaii.”  The agent claimed in 2012 that the original report was issued as a result of a “fact checking error.”

During the 2008 presidential cycle, Obama was said by MSNBC commentator Chris Matthews and Honolulu Advertiser reporter Will Hoover to have been “born in Indonesia.”  That, and other reports credited to the Associated Press that he was born in Kenya dating to 2004 when Obama was running for the U.S. Senate, raised questions about his constitutional eligibility to serve as president and commander-in-chief.

Michelle Obama has said that her husband’s “home country” is Kenya, not the U.S.

Article II, Section 1, clause 5 of the U.S. Constitution requires that the president be 35 years of age, a resident of the U.S. for at least 14 years, and a “natural born Citizen.”

Obama claims a father who was never a U.S. citizen which historically would likely have disqualified him from seeking the presidency based on entries in the congressional record and several U.S. Supreme Court decisions touching on the definition of “natural born Citizen” or the more broader category of “citizen.”

Obama’s short-form birth certificate, released “on the internet” by an unknown party in 2008 later claimed by the White House, has been deemed a forgery by graphics professionals.  The “long-form” birth certificate image released on the White House website on April 27, 2011 was declared a “computer-generated forgery” by the Maricopa County Cold Case Posse on March 1, 2012, along with the purported Selective Service registration form bearing Obama’s name sent to various FOIA requesters beginning in 2009.

The White House has not publicly responded to the claims of the forgery, and Congress has refused to launch its own investigation.

The media has not questioned the reports of forgery, but rather, ridiculed the messengers.

Maricopa County Sheriff Joseph M. Arpaio, who commissioned the probe more than four years ago, is facing a civil contempt charge with possible sanctions and, the mainstream media speculates, criminal charges, following three lawsuits from the U.S. Department of Justice since 2008.

On Friday, U.S. District Court Judge G. Murray Snow suggested to Cold Case Posse lead investigator Mike Zullo that “the U.S. government may choose to prosecute you” in the matter of documentation gathered from a criminal investigation carried out by a confidential informant, Dennis Montgomery, who previously worked with the CIA and NSA.  Arpaio assigned Zullo to supervise the informant’s work, whose data was then turned over to the MCSO and Zullo jointly.

In November 2013, Zullo referenced a criminal investigation launched by Arpaio stemming from the first which focused on the birth certificate and Selective Service registration form.

Beginning in October, an undisclosed “criminal investigation” in the Arpaio lawsuit was referenced by Arizona’s attorney general in court papers.  During his 18 months of work for Arpaio, Montgomery reportedly found evidence that 150,000 Maricopa County residents’ bank accounts were breached by a government agency.

Zullo has stated that Obama’s book, Dreams From My Father, is an obfuscation of “a life that was never lived.”  In that book, Obama claimed that he found his “birth certificate” with his vaccination record in a family book, but in January 2011, when then-Hawaii Gov. Neil Abercrombie said he would find Obama’s original birth certificate, he said he could not locate it. 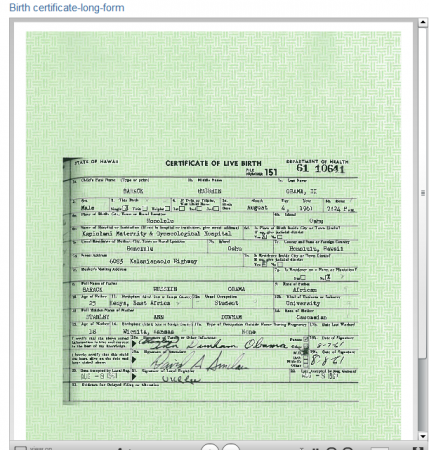 Three months later, the White House published what it said was a scan of a certified copy of the Obama’s “long-form” birth certificate from the Hawaii Department of Health (HDOH), but it was immediately denounced as a poor forgery by experts.

During the 2008 presidential race, Rep. Nancy Pelosi, who was then chairman of the Democratic National Committee, signed two sets of nomination forms for Obama and his running mate, Joseph Biden, the first of which went to all states except Hawaii and did not contain wording stating that the nominees were constitutionally eligible for the offices they sought.  Hawaii, however, which has a law requiring nomination forms to state that a candidate is qualified for the office he or she seeks, received a form stating that Obama and Biden were “legally qualified” for president and vice-president, respectively.

Over the last seven years, anyone who has questioned Obama’s background, allegiance to the United States, inconsistent life narrative, lack of documentation, and the birth certificate images has been labeled “a birther,” “racist” or a conspiracy theorist.  Many have received death threats.

Zullo has reported that some journalists signed affidavits about the threats they received for expressing interest in exploring Obama’s background.

One Response to "White House Encourages Scrutiny of Presidential Candidates…"