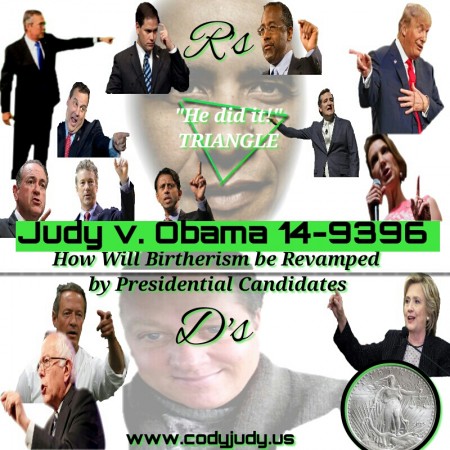 (Nov. 5, 2015) — The call for PRINCIPLE might be the last one a person would expect to be heard as a pinnacle for employment, jobs, and security but that is exactly what Presidential Candidate Cody Robert Judy has been fighting for in challenging first McCain in 2008 then including Obama and continuing the challenge in the U.S. Supreme Court Ballot Challenges of 2012 – Judy v. Obama 12-5276 and now the Civil Rights Federal Law Suit of Judy v. Obama 14-9396.

“Most people do not connect the dots”, Cody said, “But they should. It is an easy line to trace. Principles of Trust, Honor, Respect, Loyalty, Honesty, Integrity, Love, even Courage are associated principles that an Employer would certainly think were important for their employee in hiring someone for a job. Why would people think that those Principles were somehow not associated with the creation of Jobs, the number of jobs, the quality of jobs, the whole job market?

“When you are seen Taking A Stand for Principle, it is not always popular or successful at first but there are few things about Principle you will ever regret in life.”

Taking a piece of clothe from the stand Cody has taken for in the [natural born Citizen] clause of the Constitution found in Article II, Section I, Clause 5 and you will find just how important that Principle is.

When you start adding up the damages of Obamacare, ObamaAmnesty, and all of the Obama Scandals we have endured including Benghazi, Fast & Furious, IRS Profiling, and Citizen Surveillance you start to see a picture that is formed that has cost America’s Elections, Trillions of National Debt Dollars, Millions of Jobs, and last but certainly not least the Lives of some very fine people.

Principles are interwoven in Character and are not necessarily reflected in reputation as quite often that is ‘Framed’ by those in powerful positions, with great monetary- media influence and motivation that is not reflective of Principles. This is the reason quite often that what should be popular is not, and that which is more important is lost in the traffic of a crowded freeway.

That is just one reason that the Main Stream Media has been quick to characterize Birtherism as a Pejorative rather than a Principle. They have been quick to cover its pit-falls rather than its potential. We saw for example a lot of National Coverage when the Same-Sex Marriage Equality of Citizenship cases were being lost at the State Level and appealed all the way up to the U.S. Supreme Court. Reporters took notice of the Court Records and wrote stories of every appeal. People took Notice of these stories, of the Issue because the Media was Reporting it: “Oh.. we’ll see this Appealed to the U.S. Supreme Court!”